Poll Finds 9% Say a Family Member or Close Friend Died of an Overdose; 27% Say Either They or Someone Close to Them Has Been Addicted

With prescription painkiller abuse garnering more attention from the media and policymakers, the latest Kaiser Family Foundation Health Tracking Poll finds most Americans have a personal connection to the issue.

The total includes a surprising 16 percent who say they know someone who died, including 9 percent who describe that person as a close friend or family member. In addition, 27 percent say either they themselves have been, or a family member or close friend, has been addicted to painkillers. 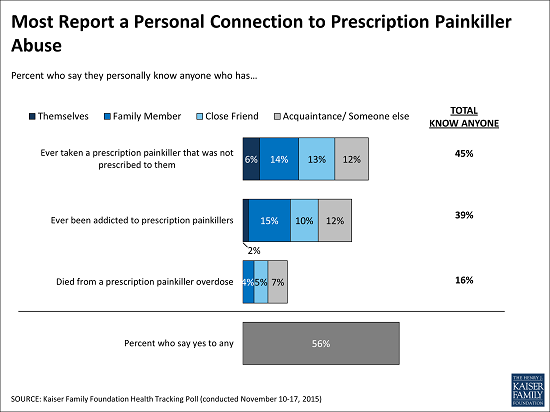 The poll provides a detailed look at the public’s views, experiences and knowledge about prescription painkiller abuse, including a look at the importance they place on the issue.

Half (50%) say reducing prescription painkiller and heroin abuse should be a top priority for their governor and legislature, ranking the issue below improving public education (76%), making health care more accessible and affordable (68%), attracting and retaining businesses and jobs (64%), and reducing crime (64%), but similar to protecting the environment (54%), reforming the criminal justice system (50%), and improving infrastructure (46%).

Large majorities also say a number of strategies to reduce prescription painkiller abuse would be at least somewhat effective, such as providing treatment for those who are addicted (85%), monitoring doctors’ prescribing habits (82%), public education and awareness programs (80%), training doctors on the appropriate use of painkillers (79%), and encouraging people who were prescribed painkillers to dispose of any extras once they no longer medically need them (69%).

The tracking poll this month also finds more people with an unfavorable view of the Affordable Care Act than a favorable view (45% vs. 38%).  Views of the health care law had been narrowly divided for much of the year.  As in the past, there is a stark partisan divide, with most Democrats (63%) having a favorable opinion, most Republicans (75%) having an unfavorable one, and independents in the middle (36% favorable, 44% unfavorable).

The poll was designed and analyzed by public opinion researchers at the Kaiser Family Foundation and was conducted from Nov. 10 to 17, 2015 among a nationally representative random digit dial telephone sample of 1,352. Interviews were conducted in English and Spanish by landline (540) and cell phone (812). The margin of sampling error is plus or minus 3 percentage points for the full sample. For results based on subgroups, the margin of sampling error may be higher.