Democrats Want to Hear More about How Candidates’ Plans Affect Seniors, How They Will Pay for Them, How Middle-Class Taxes Might Change, and How Will They Get Congress to Pass Them

Ahead of tonight’s Democratic presidential debate, Sen. Bernie Sanders is the candidate most trusted on health care by Democrats and Democratic-leaning independents, though the Medicare-for-all plan he has championed is significantly less popular than the “public option” approach put forward by some other candidates, the latest KFF Health Tracking Poll finds.

Among the overall public, a narrow majority (53%) support the idea of a Medicare-for-all plan that would cover all Americans through a single government plan. At the same time, two-thirds (65%) say they support a government-run health plan that would compete with private insurance, often called a public option. Large majorities of Democrats support both a public option (88%) and Medicare-for-all (77%).

Most Republicans oppose both approaches to expanding coverage, but more of them favor a public option (41%) than Medicare-for-all (27%). Majorities of independents support both options, though a larger share favors a public option. 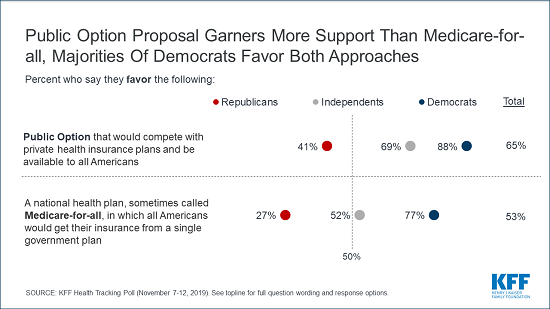 The poll also examines the public’s views towards Medicare-for-all when they are provided descriptions that include the trade-offs under consideration.

When a Medicare-for-all plan is described as requiring many employers and some individuals to pay more in taxes while eliminating both out-of-pocket costs and premiums for all Americans, the public is split with equal shares (48%) supporting and opposing it. The public is also divided when the plan is described as increasing taxes individuals will personally pay, but decreasing their overall costs for health care (47% in favor, 48% opposed).

In Primary Race, Sen. Sanders is Most Trusted by Younger Adults; VP Biden Leads among Seniors

The poll finds that Sen. Sanders, who has drawn national attention to his Medicare-for-all plan since his 2016 presidential run, has built a significant trust advantage among Democrats and Democratic-leaning independents.

When asked which candidate they trust the most to handle health care, nearly three in 10 (29%) name Sen. Sanders, with former Vice President Joe Biden (21%) and Sen. Elizabeth Warren (19%) not far behind. No other presidential candidate comes close. 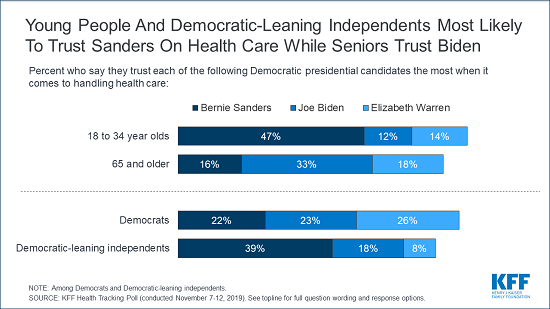 Health care remains Democrats’ top issue, with one in four (24%) Democrats and Democratic-leaning independents offering it as the issue they most want to hear candidates discuss in the next debate. Smaller shares name the environment/climate change/energy (12%), immigration (6%), the economy and jobs (5%), education (4%) or gun control (4%).

Large shares of Democrats and Democratic-leaning independents say the candidates are spending too little time talking about how their health care plans will affect seniors on Medicare (50%), how to pay for proposed changes (47%), whether their plans would increase taxes on the middle class (45%), and how they will work with Congress to enact their plans (45%).

In spite of White House and Congressional proposals to lower what people pay for prescription, the poll finds that large majorities believe President Trump and his administration (70%), Democrats in Congress (75%) and Republicans in Congress (77%) are not doing enough to lower drug costs.

Seven in 10 Americans (72%) say it’s unlikely that Congress will pass legislation to lower drug costs in the next year.  Majorities of Democrats, Republicans and independents are pessimistic about the prospects for enacting drug-cost legislation.

Despite ACA Marketplace Premiums Falling, Few Think That Is the Case

The Affordable Care Act’s 2020 open enrollment period began this month, allowing people who buy their own coverage or are uninsured an opportunity to sign up for Marketplace coverage.

Designed and analyzed by public opinion researchers at KFF, the poll was conducted November 7-12, 2019 among a nationally representative random digit dial telephone sample of 1,205 adults. Interviews were conducted in English and Spanish by landline (302) and cell phone (903). The margin of sampling error is plus or minus 3 percentage points for the full sample. For results based on subgroups, the margin of sampling error may be higher.