As with the Public, Physicians’ Views on Affordable Care Act Split Along Party Lines

The first in a series of reports on a comprehensive new survey finds most primary care doctors, nurse practitioners, and physician assistants report an increase in Medicaid or newly insured patients since the Affordable Care Act’s (ACA) major coverage provisions took effect, yet little change in their ability to provide high-quality care.

Overall, 59 percent of physicians and 64 percent of nurse practitioners and physician assistants say that since January 2014, they have seen a higher number of patients who were previously uninsured, and now have coverage or are currently covered by Medicaid.  Providers working in community clinics, and those in states that expanded their Medicaid programs, are more likely to report such increases.  Nearly half of physicians (44%) and more than half of nurse practitioners and physician assistants (54%) report an increase in the total number of patients they see.

Designed and analyzed jointly by the Kaiser Family Foundation and The Commonwealth Fund, the 2015 National Survey of Primary Care Providers provides a detailed assessment of frontline providers’ experiences with, and views of, the Affordable Care Act and other changes occurring in health care delivery and payment, as well as their perspectives on the future of primary care.  This first report focuses on the ACA.  Survey results dealing with primary care providers’ reactions to changes in the health system generally are still to come.

“Physicians are highly trained professionals, but when it comes to the Affordable Care Act, they turn into partisans, the same way the general public does,” Kaiser Family Foundation President and CEO Drew Altman said. “The survey finds that physicians who are Republicans are much more likely to perceive negative effects from the law, while those who are Democrats are far more likely to see positive ones.”

“Millions of Americans have gained coverage since the Affordable Care Act took effect, and previous surveys have shown that most have been able to find doctors and get the health care they need,” said Commonwealth Fund President David Blumenthal, M.D. “This study provides evidence that primary care providers have been able to maintain quality of care for all of their patients, including those with Medicaid and new coverage.”

The survey finds that one year into the ACA coverage expansions, most providers do not report any overall change in quality of care or patient satisfaction.  This is true even among those who reported increases in newly insured or Medicaid patients.  A few details: 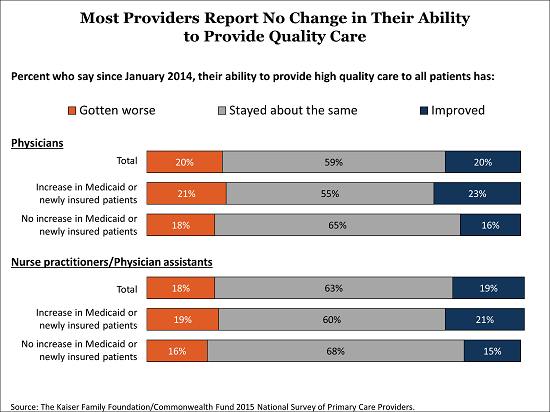 The survey also finds primary care providers nearly evenly divided in their overall view of the ACA.  Among physicians, 52 percent express an unfavorable view of the law and 48 percent a favorable one.  As with the public at large, opinion is largely driven by partisan identification, with 87 percent of Republican physicians viewing it unfavorably and 87 percent of Democratic physicians viewing it favorably.  Patterns of partisan response are similar among nurse practitioners and physician assistants.

Partisanship also drives providers’ opinions on how they feel the ACA has affected their medical practice.  Overall, 23 percent of physicians say the law has had a positive impact, 36 percent say it has been negative, and 31 percent say there has been no impact.  At the same time, physicians who are Democrats are more likely to report a positive rather than negative impact by a three-to-one margin, and physicians who are Republicans lean in the opposite direction by seven-to-one.  Similarly, while large shares of physicians say the ACA has not impacted their patients’ quality of care or their ability to meet patient demand, Republicans are more likely to report a negative impact and Democrats a positive one.

The survey finds that a large majority of primary care providers, regardless of party affiliation, say they are satisfied with their medical practice.  Satisfaction levels among physicians have increased from 68 percent in 2012 to 83 percent in 2015.  Still, a sense of pessimism exists among physicians, with nearly half (49%) saying they would not advise a young person to pursue a career in primary care.  Nurse practitioners and physician assistants are more optimistic, with the vast majority (85%) saying they would make such a recommendation.

Attitudes and Experiences of Primary Care Providers Under the First Year of ACA Coverage Expansion is available online.

The Kaiser/Commonwealth Fund 2015 National Survey of Primary Care Providers, conducted by mail and online from January 5 through March 30, 2015, is based on a nationally representative sample of 1,624 primary care physicians, along with a separate nationally representative sample of 525 nurse practitioners and physician assistants in primary-care practices.  The margin of sampling error is plus or minus 3 percentage points for physicians and 5 percentage points for nurse practitioners and physician assistants.  For results based on subgroups, the margin of sampling error is higher.

The Commonwealth Fund is a private foundation supporting independent research on health policy reform and a high performance health system.