Following Midterms, Both Democrats and Republicans Expect Washington to Continue to Debate the Affordable Care Act, But the Public Is Splintered Over What Congress Should Do

About Half of Uninsured Expect To Find Coverage in the Coming Months, Though Another Quarter Say They Won’t Because They Do Not Believe They Can Find an Affordable Plan

Following the Nov. 4 midterm elections that saw Republicans seize control of the Senate and expand their House majority, nearly half of Americans (47%) expect increased debate between the two parties over the Affordable Care Act, according to the Kaiser Family Foundation’s latest tracking poll. In comparison, 42 percent say the amount of debate will not change, and very few (5%) say it will decrease. 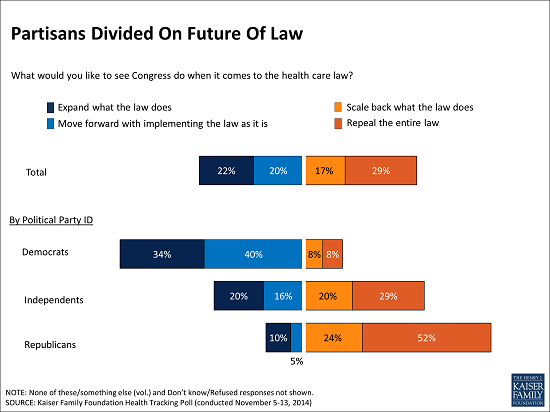 Conducted just prior to Saturday’s start of the ACA’s second open enrollment season, the poll also probes the views of people without health insurance, one of the key target groups for outreach and enrollment efforts.

It finds the uninsured remain largely unaware of the renewed opportunity to purchase or enroll in health insurance through the marketplaces over the next few months. About 9 in 10 (89%) don’t know when open enrollment starts, similar to the share who didn’t know in the October poll.

Even so, about half of the uninsured (49%) say they plan to get coverage during the coming months, and 41 percent say they do not expect to obtain coverage, including about a quarter (24%) of all uninsured who say they do not believe they can find a plan that they can afford. 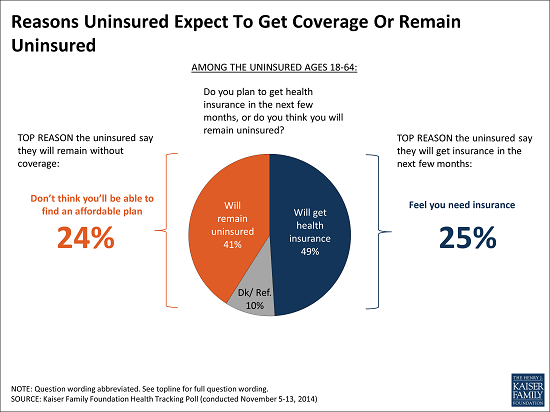 Still more than eight in 10 of the uninsured (84%) say that it is at least somewhat important to them to have health insurance (including 62% who say it is “very important”). Similarly, seven in 10 say health insurance is something they need; more than twice the share who chose “I’m healthy enough that I don’t really need health insurance.”

The latest tracking poll was designed and analyzed by public opinion researchers at the Kaiser Family Foundation and was conducted from November 5-13, 2014 among a nationally representative random digit dial telephone sample of 1,501 adults ages 18 and older. Interviews were conducted in English and Spanish by landline (751) and cell phone (750). The margin of sampling error is plus or minus 3 percentage points for the full sample and plus or minus 9 percentage points for the uninsured.  For results based on other subgroups, the margin of sampling error may be different.