3.5 Million Could Have a Zero-Dollar Premium Contribution or Pay Less for Health Insurance than Penalty Due to Premium Subsidies; 7.1 Million Would Pay More to Get Coverage

A new analysis from the Kaiser Family Foundation finds that among uninsured people who are eligible for an Affordable Care Act marketplace plan, the average penalty for remaining without coverage in 2016 would be $969 per household – 47 percent higher than the 2015 estimated average of $661.

The health law’s individual mandate requires most people to have health coverage or pay a tax penalty, with the penalty phased in between 2014 and 2016. The penalty for 2016 is calculated as the greater of two amounts: either a flat dollar amount equal to $695 per adult plus $347.50 per child, up to a maximum of $2,085 for the family; or 2.5 percent of family income in excess of the 2015 income tax filing thresholds. The penalty is capped at an amount equal to the national average premium for a bronze plan, which is the minimum coverage available under the law. 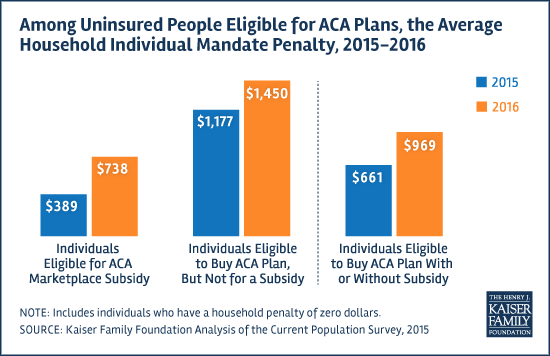 The new analysis finds a bronze plan would cost $0 in premiums or less money than the individual mandate penalty for about 3.5 million uninsured people eligible for ACA marketplace plans, due to premium subsidies. The subsidies are available to low- and middle-income households to defray the costs of premiums in ACA marketplaces. Within the marketplaces, bronze plans have lower premiums, but higher deductibles and other cost sharing than other metal tiers. Bronze plan enrollees are not eligible for the cost-sharing reductions available through silver plans for lower-income households.

In contrast, the least expensive insurance option would cost more than the estimated individual mandate penalty for about 7.1 million uninsured people eligible to purchase an ACA marketplace plan, with or without subsidies, according to the analysis.

The Cost of the Individual Mandate Penalty for the Remaining Uninsured draws on data from the 2015 Current Population Survey and 2016 ACA marketplaces.

For further analysis of the 2016 ACA marketplaces, visit kff.org