The Role Health Is and Is Not Playing in the Midterms

Health care has achieved top billing in the midterms. It’s the top issue for Democrats and independents, not Republicans, but that’s been more than enough to propel health to the top of  the issue list in national polls, even ahead of the economy and jobs, a rare status for health care. Democrats have jumped on the salience health care has for their base, using it as a tool to energize voters and bludgeon Republicans — making 2018 almost the reverse of 2016.

But, the punditocracy and the media have also exaggerated the role health is playing in the midterms. As the table below shows, the top issue is not the same thing as the top factor driving the vote.  Voters will also heavily weigh their feelings about President Trump, their views on the candidates themselves, their desire for a check on Republican and Trump control of Congress, and their allegiance to their party when they cast votes. These factors are not necessarily more important than issues like health care, but they are at least as important. 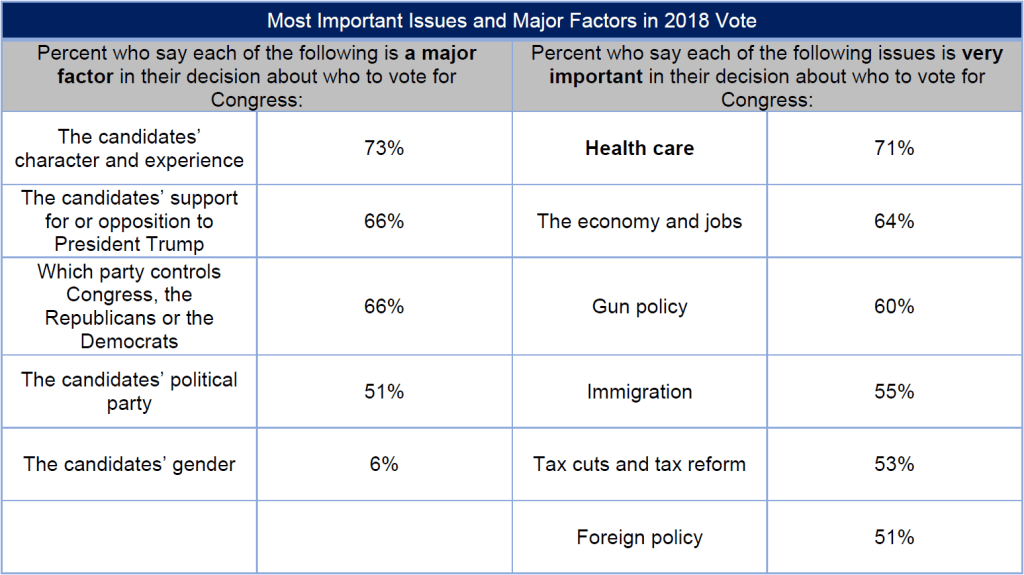 Polls ask about the importance of “health” or “health care” to voters. In the campaign, there actually is no such thing as “health care.” Candidates discuss a number of different issues depending on the state, the district, and their campaign strategies.  In some places it’s pre-existing conditions, in others, it’s Medicare-for-All, ACA repeal and replace, Medicaid expansion, prescription drug costs, reproductive health, or some combination of these different health issues.

Health issues matter most right now to Democrats and women. In a midterm, mostly the bases for each party and seniors come out to vote. The greater the turnout on the Democratic side, and among women voters, the more health will matter in this election. It remains to be seen how big turnout will be and how far it will extend beyond the traditional base of voters who show up to vote in midterms. One group we know will vote in midterms are seniors, but Medicare has not been a big issue in this midterm, and seniors tend to vote their party. Somewhat more seniors are Democrats than Republicans (40% to 31%).

Whatever the impact of health care and other factors on the vote, the outcome of the election will have enormous consequences for health policy. Republican control could bring another effort at ACA repeal and replace and a Medicaid block grant. The increasing popularity of the ACA and growing interest in Medicaid expansion could make these efforts even tougher to sell this time around than last time, but they are popular with the Republican base and conservative donors as positioning begins for 2020. Republicans will also continue to promote changes to the health law that conservatives favor through administrative and regulatory action.

If Democrats take the House, their control of that chamber will block any efforts at ACA repeal or a Medicaid block grant. They will also exercise aggressive oversight of the Trump administration’s actions, putting them in a constant media spotlight. If elected, Democratic governors in Georgia and Florida will likely push for Medicaid expansion in those two big, southern states.

The 2020 campaign will begin almost immediately after the midterms, and Democrats will pick up where they left off — on offense on health care. That may be the most important way in which health matters in politics now; not so much as one of several voting factors in the midterms, but as a continuing issue as the 2020 campaign takes shape.