This was published as a Wall Street Journal Think Tank column on May 4, 2015. 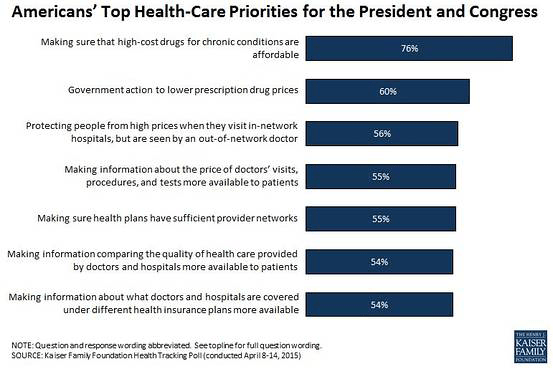 Given the never-ending debate about the Affordable Care Act, you might think that when Americans are asked to name their top health priorities for the president and Congress, they would pick something related to Obamacare, whether it involves expanding the law, scaling it back, or repealing it. But it turns out the American people don’t live in the ACA bubble. Their top priority overwhelmingly, and on a bipartisan basis, was “making sure high cost drugs for chronic conditions were affordable for people who need them.”

The chart above shows the surprising results of the Kaiser Family Foundation’s April Health Tracking Poll. When presented with a long list of options, 76% of Americans chose reducing the cost of drugs for the chronically ill as their top priority. Contributing factors could include that drug prices have been rising sharply over the last year, drug costs for treating illnesses such as Hepatitis C have been in the news, and making drugs more affordable for sick people is a sympathetic cause. Drug costs seem to be a widely held concern, as the second most popular choice was government action to lower prescription drug prices. The seven priorities picked by more than 50% of respondents all dealt with meat-and-potatoes issues people encounter using the health system, such as protecting consumers from the high cost of out-of-network care (56%) or ensuring that provider networks are adequate (55%). By contrast, far fewer chose ACA-related priorities. For example, 37% picked repealing the individual mandate and 26% chose eliminating the “Cadillac tax” on high-cost employer insurance plans, a proposal some Democrats recently made in Congress.

The partisan breakdown beneath the aggregate polling data suggests a more nuanced story. Again, lowering the cost of drugs for chronic conditions was No. 1, but ACA-related priorities were closer to the top of the list for partisans. Democrats’ second and third priorities were requiring all states to expand Medicaid and expanding financial assistance to help people purchase insurance under the ACA, picked by 74% and 72% respectively. Democratic support for these items drove total public support for them to 50%. Repealing the ACA or its individual mandate came in second and third for Republicans, chosen by 60% and 52% respectively. The relatively high ranking of these issues for Republicans pretty much guarantees that the health-care law will continue to be a topic for GOP candidates in the 2016 primary season, though with all of them talking about it, candidates will face a challenge to differentiate themselves from one another.

Overall, it is striking how focused the public is on real issues people deal with using the health-care system, especially pocketbook concerns, and how divorced the overall public’s top priorities are from the continued political wrangling over the Affordable Care Act.