This was published as a Wall Street Journal Think Tank column on August 4, 2014.

Court decisions can have huge policy implications. Because judges are not policy experts, statistical modelers or economists, and because these are inexact sciences anyway, the policy implications of judicial rulings may not be fully appreciated when they are made.

A good example is the 2012 U.S. Supreme Court ruling that made Medicaid expansion optional for states. It’s hard to imagine that the justices had any idea that their decision would leave 4.8 million low-income people in a coverage gap without insurance in states that chose not to expand, or that 10 million slightly higher-income people would get tax credits to help them buy coverage in those same states. (Not that those things may, or should have, changed the justices’ conclusion.)

Now let’s consider Halbig v. Burwell, a case in which recent appeals court rulings made headlines. Halbig, which raises questions about whether the U.S. government can provide tax credits to people in federal- as well as state-run insurance exchanges, is still churning through the courts.

What if the plaintiffs prevail in Halbig, denying tax credits to moderate-income people in states with federal health insurance exchanges? The map below shows the potential combined effect of the 2012 Supreme Court decision and a plaintiffs’ victory in Halbig. (To be clear, the courts are not considering the earlier Medicaid ruling as part of Halbig, but the combined effect would be real.) 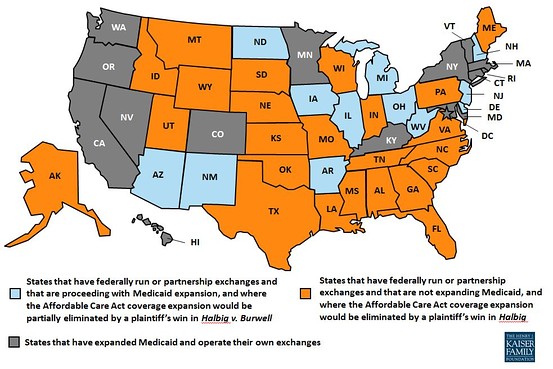 Click here to see an enlarged image of this map.

Twenty-four states, shown in orange in the map, have not expanded Medicaid and also have federally run exchanges or partnership exchanges with the federal government. The combined court decisions would effectively eliminate the Affordable Care Act health-coverage expansion in these states unless their anti-ACA governors and legislatures reversed course and set up state exchanges. Few are likely to do so. Under this outcome, an estimated 10 million people would lose eligibility for tax credits.

Twelve states, shown in blue, have expanded Medicaid but have federal exchanges. About 85% of people who buy coverage in those exchanges are getting tax credits, and most of these people cannot afford coverage without the credits, so the coverage expansion would be partially eliminated in those states too unless governors and legislatures switched to a state exchange. (There may be ways to technically qualify as a state exchange while still relying on the federal exchange and Web site for backup.) An estimated 2.8 million people eligible for tax credits in the 12 states would lose their ability to get financial assistance to buy coverage.

New Mexico and Idaho have a murky status because they have approved state exchanges but are still using the federal system, so it’s not totally clear whether they would lose federal credits.

What does all this mean? Whether it’s Brown v. Board of Education or Citizens United or the pending Halbig lawsuits, court decisions have implications on policy and people. But the magnitude of those implications are not often known when these rulings come down.