The American Rescue Plan (ARP), recently signed into law by President Biden, increases and expands eligibility for Affordable Care Act (ACA) premium subsidies for people enrolled in marketplace health plans. The law also creates new, temporary premium subsidies for COBRA continuation coverage; and it temporarily changes the rules for year-end tax reconciliation of marketplace premium subsidies. These changes will improve the affordability of coverage for individuals who are already enrolled in marketplace health plans, and will provide millions more an opportunity to newly sign up for coverage with increased financial assistance this year.  The law also made changes to the Medicaid program designed to increase coverage, expand benefits, and adjust federal financing.

Under ARP, ACA marketplace premium subsidies are substantially enhanced for people at every income level and, for the first time, offered to those with income above 4 times the federal poverty level (FPL).

People up to 150% FPL can now get silver plans for zero premium with vastly reduced deductibles. Previously, marketplace premium subsidies were partial; no matter how poor, people had to contribute something toward the cost of the benchmark silver plan (i.e., the second lowest cost silver plan in their area).  Those with income at 100% FPL had to contribute 2.07% of household income ($264 per year in 2021) toward a benchmark plan; at 150% FPL that amount increased to 4.14%  of household income( $792 per year).  Now under ARP, the benchmark marketplace plan will be fully subsidized for people earning up to 150% FPL.  Cost sharing subsidies were already most generous at this income level (the average silver plan deductible for people at 150% FPL is $177 this year). As a result, low income people now can qualify for premium-free silver plans with modest deductibles for covered health benefits. 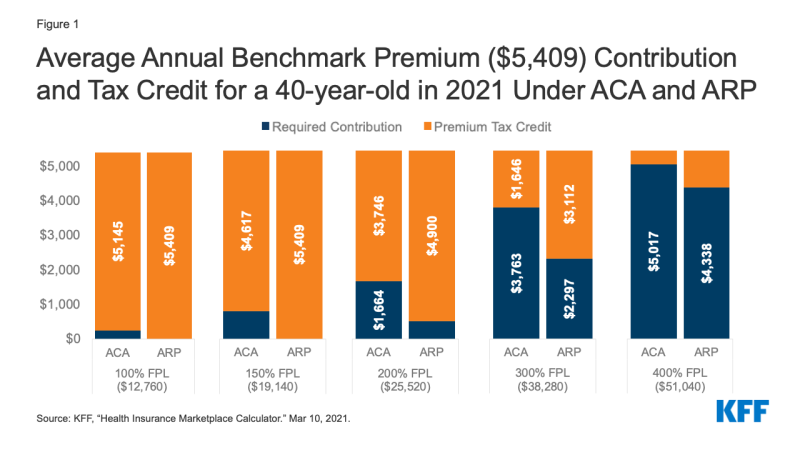 People with income above 400% FPL will be newly eligible for marketplace premium subsidies. Under the ACA, people with income above 400% FPL were not eligible for marketplace premium subsidies. Now, they will be required to contribute no more than 8.5% of household income toward the benchmark plan. This change will provide limited relief to younger marketplace participants – for example, for 24-year-olds in most areas, the unsubsidized age-rated benchmark plan premium already costs less than 8.5% of income for someone at 401% FPL – but will offer substantial relief for older individuals, where the unsubsidized premium averages nearly 25% of household income for someone at that same income level who is 64 years old. (Figure 2) Before this change, when they were ineligible for premium subsidies, some people with income above 400% FPL bought their insurance outside of the marketplace, or bought non-ACA compliant plans (such as short term policies). These individuals may want to return to the marketplace where coverage may now be more affordable and more comprehensive. The Biden Administration has reopened marketplace enrollment through May 15.

The ARP premium subsidy enhancements are effective during 2021 and 2022. These changes to marketplace premium subsidies are temporary, in effect only during calendar years 2021 and 2022. The specifics and timeline for implementation of these changes is yet to be determined. However, once implemented, current enrollees may be able to sign into their marketplace account to increase the amount of advanced premium tax credit (APTC) they receive, thereby lowering their monthly health plan premium payment for the remainder of this year. Subsidies for current enrollees are retroactive to the beginning of this calendar year and can also be claimed as tax refunds when people file their 2021 tax return next year.

In HealthCare.gov states, current enrollees will also be able to change plans during the COVID enrollment period, which currently extends through May 15, 2021. People covered in state-based marketplaces should check with their marketplace for information about their ability to change plans as the new premium subsidies are implemented. Presently, some state-based marketplaces offer a COVID enrollment period when only uninsured individuals can sign up. 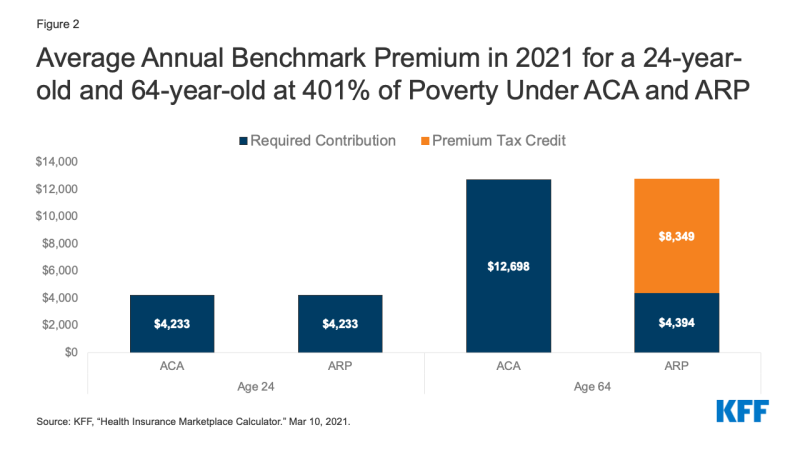 The ARP provides for enhanced marketplace subsidies for people who receive or are approved to receive unemployment insurance (UI) benefits during any week in 2021. The ARP also extends the current federal supplement ($300 per week) to state UI benefits through September 6, 2021. The federal UI supplement is not taken into account in determining eligibility for Medicaid or CHIP.

When UI recipients apply for marketplace subsidies, special rules will be in effect during 2021.

Household income in excess of 133% FPL will be disregarded for purposes of determining eligibility for marketplace premium and cost sharing subsidies in 2021. As a result, people who receive UI benefits at any time in 2021 will be eligible for a zero-premium benchmark silver plan with comprehensive cost sharing subsidies this year.

People receiving UI benefits will be considered “applicable taxpayers” during 2021. Normally under the ACA, to be eligible for marketplace subsidies, a person must qualify to be an “applicable taxpayer” which requires having an income of at least 100% FPL. Under the ARP, for 2021 only, people who receive UI benefits are defined to be an applicable taxpayer. That can help some UI recipients with income below the federal poverty level who live in states that have not adopted the ACA Medicaid expansion; they were otherwise in the “coverage gap,” ineligible for both Medicaid and marketplace subsidies.

These enhanced marketplace subsidies for UI recipients are only for the 2021 coverage year.

Congress would need to enact further legislation to extend UI subsidy enhancements beyond this year.

In addition, people receiving UI benefits may still be ineligible for marketplace subsidies if they have access to job-based health benefits that meet ACA standards for affordability and minimum value. The affordability of job-based coverage will continue to be measured based on household income, including UI benefits and amounts above 133% FPL.

Recognizing that the pandemic caused greater-than-usual economic disruption and uncertainty in 2020, the ARP waives repayment of any excess premium tax credit received by marketplace participants during that year.

Implementation questions remain to be addressed. Before the ARP was enacted, the Internal Revenue Service (IRS) had already finalized 2020 tax forms and schedules, which provide for APTC reconciliation and repayment of excess credits. Further action by the IRS will likely be forthcoming to educate the public about this new protection, advise on how to use it when filing the 2020 tax return, and to refund amounts to people who may have already filed their 2020 tax return with repayments.

The COBRA premium subsidies can be paid for coverage months no earlier than April 1, 2021 and no later than September 30, 2021. The subsidy can end earlier than September 30 in some circumstances.  It ends when COBRA coverage is exhausted; so for example, someone who first became eligible for COBRA due to a job layoff on March 1, 2020 could continue in that plan for 18 months, or through August 2021.  That person could claim the COBRA premium subsidy starting in April 2021, but the subsidy would stop when COBRA exhausts at the end of August.  People also lose eligibility for the COBRA premium subsidy once they become eligible for other job-based coverage.  If this happens, people must notify their COBRA plan administrator or risk owing a penalty.

The subsidy is for people whose COBRA qualifying event involves termination of employment or reduction in hours worked. People are not eligible for the COBRA subsidy if they quit voluntarily. Nor are they eligible for subsidies if COBRA resulted from other qualifying events, including death of or divorce from the covered employee, the covered employee becoming entitled to Medicare, or loss of dependent child status.

People who became eligible for COBRA earlier in the pandemic can still elect it. Normally, people have up to 60 days from their qualifying event to elect COBRA continuation coverage. During the pandemic, however, people have additional time to elect COBRA, thanks to a COVID disaster relief notice issued by the Departments of Labor and Treasury. Their new COBRA election deadline will be the earlier of (1) one year from the date the person’s election period would otherwise have ended, or (2) 60 days after the announced end of the COVID National Emergency. For example, a person who was laid off early in 2020 and whose deadline for electing COBRA was April 1, 2020 can now take until April 1, 2021 to elect COBRA. Going forward, a person who becomes newly eligible for COBRA can have her election period extended by up to 1 year (or until 60 days following the end of the National Emergency, whichever is earlier.) This emergency rule applies to election of COBRA arising from all qualifying events.

People who became eligible for COBRA earlier in the pandemic can have coverage start prospectively. Normally, once elected, COBRA coverage dates back to the qualifying event and premiums have to be paid retroactive to that point in time. This will remain the rule for subsidy-eligible people whose qualifying event occurs on or after April 1, 2021

However, under the ARP a special rule applies for subsidy-eligible individuals whose COBRA qualifying event pre-dates enactment of the ARP and who have not yet elected COBRA; or for such individuals if they previously elected COBRA but subsequently discontinued it, and who otherwise remain eligible for COBRA. When these individuals elect COBRA, coverage will commence on the first day of April 2021. Their COBRA coverage will not extend back in time before that date and they will not owe COBRA premiums prior to that date.

Eligible individuals who were already paying for COBRA when the law passed can also claim the subsidy.

COBRA premium subsidies are not counted as income to the individual. Subsidies will not affect a person’s tax liability or eligibility for other income-related benefits.

People eligible for COBRA subsidies may also be eligible for marketplace subsidies or Medicaid. Just being eligible for COBRA does not affect a person’s eligibility for marketplace subsidies or Medicaid. Those who have a choice will want to weigh their out of pocket costs (for premiums and cost sharing, net of subsidies), as well as any differences in plan provider networks, covered benefits, and other plan features. Generally, once a person enrolls in COBRA, she won’t have an opportunity to choose marketplace coverage again until the earlier of the next open enrollment period or the date when she exhausts COBRA coverage.

When COBRA premium subsidies end, people can continue unsubsidized enrollment in COBRA. Of course, for many, unsubsidized COBRA may prove unaffordable. Generally, if a person terminates (or stops paying the premium for) COBRA before it exhausts, this loss of coverage does not make a person eligible for a special enrollment period (SEP) in the marketplace.

Other ARP Changes and Affordability

Stimulus payments – The ARP provides for stimulus payments up to $1,400 for qualifying individuals in 2021. These payments are considered tax credits and are not counted as income for purposes of tax liability or eligibility for income-based programs and benefits.

Exemption of UI benefits from federal income tax in 2020 – The ARP also included a provision exempting the first $10,200 in UI benefits paid to an individual in 2020 from inclusion in that individual’s adjusted gross income for that year, which will also lower countable income for the purposes of marketplace premium subsidies. As a result of this change, people who participated in the marketplace in 2020 may find they were eligible for greater premium tax credits than they claimed during the year. If so, people can receive unclaimed 2020 APTC as a refundable tax credit when they file their 2020 federal income tax return. People who already filed their 2020 return before the law was enacted should be able to claim the refund, as well.

These significant changes to make private coverage more affordable were enacted after many people had already enrolled in 2021 marketplace plans, after HealthCare.gov and state-based marketplaces had announced a time-limited special COVID enrollment opportunity, and after the 2020 tax filing season was underway. It will take time for federal and state agencies to implement these changes, including updates to marketplace subsidy eligibility systems, drafting of model notices, and revision of tax forms. The Department of Health and Human Services has announced that the enhanced ACA premium subsidies will be available through HealthCare.gov beginning April 1, but other changes in the ARP may take more time. Under the current special COVID enrollment period, people will have until May 15 to newly sign up for coverage or change plans to take advantage of the additional help.