Most Say They Favor a “Public Option” to Compete with Private Marketplace Plans, But Views Are Malleable After Hearing Pro and Con Arguments

Health care itself is not playing a major role in the election, as the poll finds the candidates’ characteristics, the economy and jobs, and foreign policy ranking are the top factors behind voters’ decision. The poll looks beyond the election to assess the public’s top health care priorities once the results are known.

Making sure that high-cost drugs for chronic conditions are affordable to those who need them is viewed as a “top priority” by three quarters (74%) of the public, including large majorities of Democrats, Republicans and independents. In addition, nearly two-thirds (63%) of the public say government action to lower prescription drug prices is a top priority. Other top priorities include making sure health plans have sufficient doctor and hospital networks (57%) and protecting people from high charges when they visit an in-network hospital but are seen by an out-of-network doctor (54%).

Fewer cite various changes to the Affordable Care Act as top priorities for the next president and Congress, such as helping people with moderate incomes pay high out-of-pocket costs for medical care (44%), repealing the law entirely (37%), and repealing specific provisions requiring nearly all Americans to have health insurance or pay a fine (38%) and requiring employers with 50 or more workers to pay a fine if they don’t offer health insurance to their workers (29%). Among Republicans, however, repealing the Affordable Care Act entirely remains a top issue, ranking second among health care priorities. 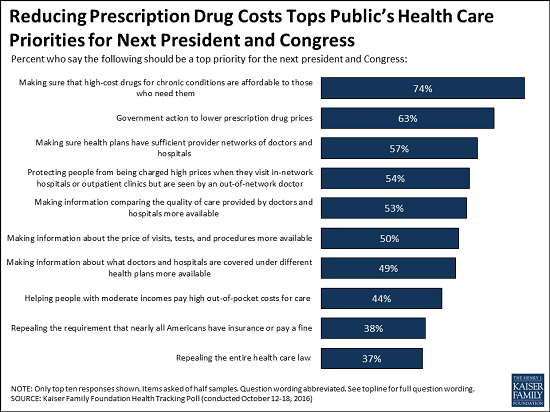 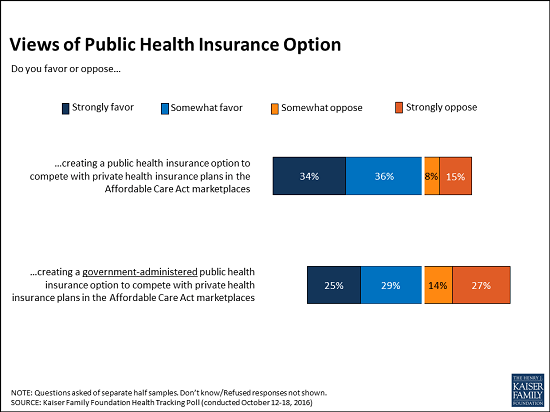 In addition, some people’s opinion about a public option can shift when presented with arguments being made by those on the other side.  For instance, one-fifth (21%) shifts their opinion from favor to oppose after hearing the argument often made by opponents that doctors and hospitals would be paid less, and 27 percent shifts to oppose after hearing that the government plan would have an unfair advantage over private insurers.

On the other side, about one in ten changes their stance from oppose to favor after hearing that the public option could help drive down costs through increased competition (13%), provide more choices to people getting insurance through the marketplaces (11%), or could be the only insurance option for people in areas where private insurers may not offer marketplace plans (11%).

When asked specifically about the future of the Affordable Care Act, the public remains divided. About one-third (32%) want the next president and Congress to repeal the entire law, and a similar share (31%) want Washington to expand what the health care law does. One in five (18%) want to see the law implemented as is, while 9 percent want to see it scaled back. There are huge partisan divisions on this question, with large majorities of Republicans and voters supporting Donald Trump wanting the entire law repealed or scaled back, and large majorities of Democrats and voters supporting Hillary Clinton wanting it expanded or implemented as is.

With the Affordable Care Act’s fourth open enrollment period for marketplace coverage beginning Nov. 1, the tracking poll examines the public’s view on the 2010 health care law, including which groups they think are better and worse off as a result of this legislation, and what sources they go to for information about the law.

The public overall this month is evenly divided on the Affordable Care Act, with 45 percent reporting both a favorable and an unfavorable view. These views are largely stable, with few people changing their minds when presented with the other side’s arguments.

Designed and analyzed by public opinion researchers at the Kaiser Family Foundation, the poll was conducted from October 12-18 among a nationally representative random digit dial telephone sample of 1,205 adults. Interviews were conducted in English and Spanish by landline (424) and cell phone (781). The margin of sampling error is plus or minus 3 percentage points for the full sample. For results based on subgroups, the margin of sampling error may be higher.