One in Seven Americans Say They Talked to a Doctor about a Drug Ad, Often Leading to a Prescription

About two-thirds (65%) of voters say a candidate’s support for continued protections for people with pre-existing health conditions is either the “single most important factor” or “very important” to their vote in the upcoming midterms elections, finds the latest Kaiser Family Foundation tracking poll.

That’s a larger share than says the same about other health care issues, including bringing down prescription drug costs (58%), repealing the Affordable Care Act (53%), stabilizing the ACA marketplaces (52%), or passing a national health plan or Medicare-for-all (48%), the poll finds. 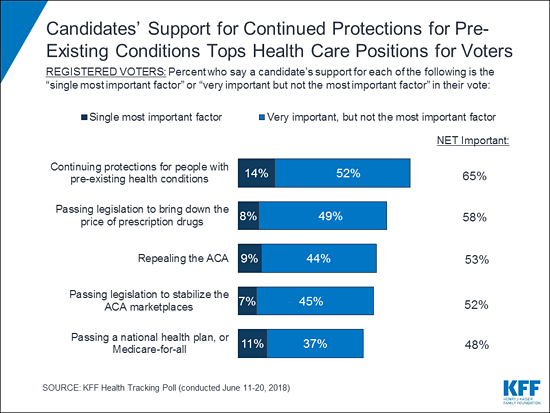 There are differences by partisan identification. Eight in 10 Democratic (81%) and nearly two-thirds (63%) of independent voters say the issue is at least “very important” to their vote – making it the top health care issue for both groups of voters. About half (51%) of Republican voters say the same, ranking the issue below repealing the ACA (58%) among Republicans.

The findings come as many Republican state attorneys general are suing to overturn the Affordable Care Act as unconstitutional. The Trump Administration this month opted not to defend the 2010 law and instead asked the courts to invalidate many key provisions, including its pre-existing condition protections.

Almost six in 10 Americans (57%) say that they or someone in their household has a pre-existing condition of some sort, the poll finds. This includes majorities of men and women, and majorities in all age groups except those under 30.

Among the general public, large majorities say that the ACA’s provisions that bar insurers from discriminating against people with pre-existing conditions are “very important” to them, the poll finds.

Health care overall remains one of voters’ top issues heading into the midterms, with a quarter (25%) of voters listing it as a “most important issue” for candidates to discuss during their campaigns. That’s similar to the share who says the same about the economy and jobs (23%) and somewhat larger than the share who says so about gun policy (20%), immigration (18%) and foreign policy (13%). Health care ranks first among issues for Democrats and independents, while Republicans rank the economy and jobs first. 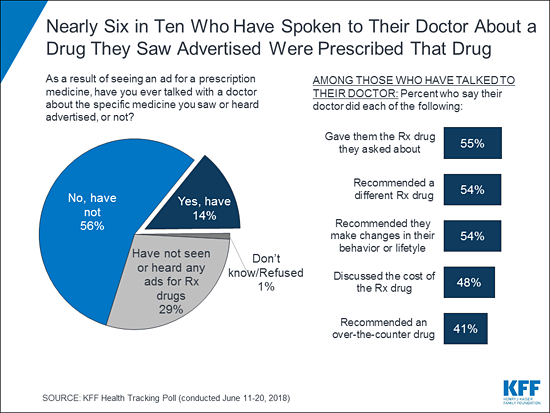 The poll also examines the public’s views on whether drug makers should be required to include information about a drug’s list price in television advertisements – an idea included in President Trump’s May 11 plan on drug costs.

Three-quarters (76%) of the public say they favor the federal government requiring prescription drug ads to include a statement about how much the drug costs. This includes majorities of Democrats (83%), independents (73%) and Republicans (72%). Other KFF polls have found similar bi-partisan majorities in favor of a wide range of policy actions to address drug costs.