A new interactive tool from KFF estimates total household health spending for individuals and families in the U.S., including costs that are often less visible to consumers.

Users can generate scenarios based on family size, income level, insurance source, and health status. In addition to estimating direct costs like deductibles and copayments, the tool highlights indirect spending on health care, such as state and federal taxes paid to fund public programs like Medicare and Medicaid, as well as employer contributions toward health insurance premiums and Medicare payroll taxes.

The typical non-elderly family in the U.S. spends $8,200 per year, or 11% of their income, on health care – not including employer contributions – but this can vary substantially by income, type of insurance, and health status.

For example, a person with employer coverage earning $50,000 annually spends on average $5,250, or roughly 11% of her income, on health care. This includes $800 per year in out-of-pocket costs, a $1,400 premium contribution, and $3,050 in state and federal taxes to fund health programs.

Her employer contributes even more, including an additional $5,500 toward her annual premium and $750 in Medicare payroll tax. Economists generally believe that employer spending on health benefits and payroll taxes depresses wages, but workers do not directly observe that cost. 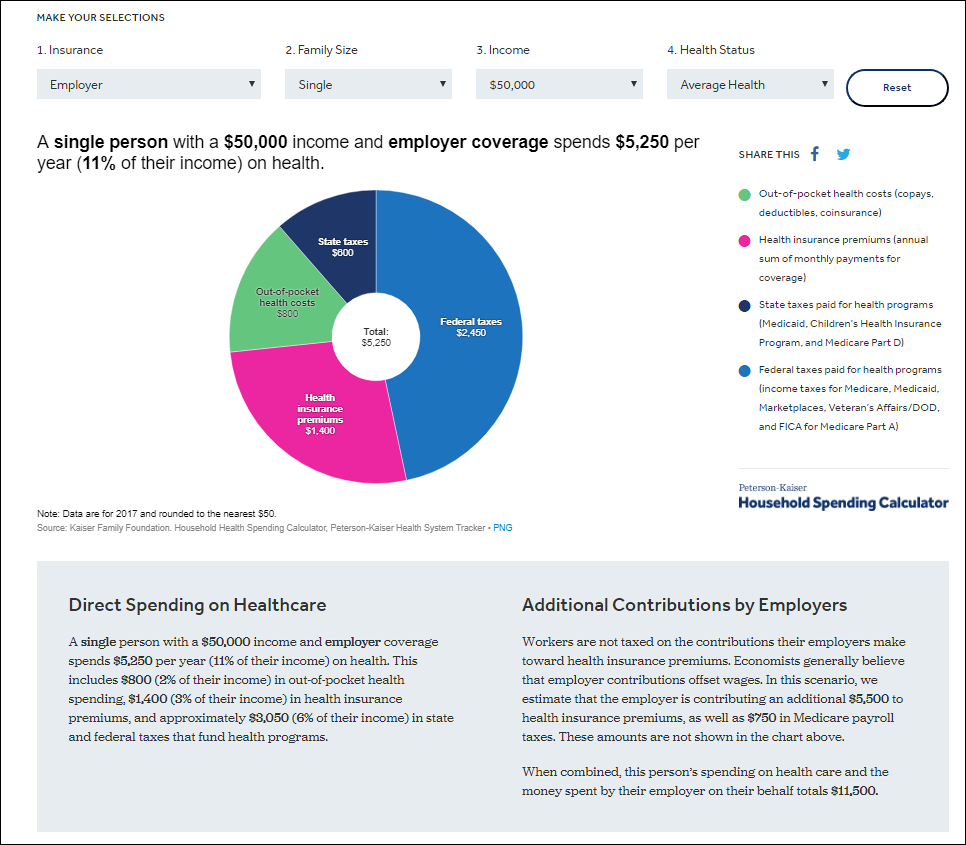 The calculator also demonstrates the variability of health spending by insurance source. If the aforementioned single person earning $50,000 annually obtains coverage on the individual market instead of through her employer, she can expect to spend 20% of her income on health care.

Household health spending also increases significantly when health status worsens, largely due to the additional out-of-pocket costs associated with greater use of health care services. A family of four in good health with employer-sponsored coverage and earning $100,000 per year spends about 12% of their income on health care. If at least one member of the family reports worse health, household health spending increases to 15% of their income.

The Household Spending Calculator is available on the Peterson-Kaiser Health System Tracker, a partnership between the Peterson Center on Healthcare and KFF that monitors the U.S. health system’s performance on key quality and cost measures.