KFF/UNAIDS Analysis Finds Donor Governments Spent US$7.8 Billion for HIV in 2019, Down Almost $200 Million From the Previous Year

Funding from donor governments was nearly the same as a decade ago, despite an increase in the number of people living with HIV of 25 percent over that period.

A new report from KFF (Kaiser Family Foundation) and The Joint United Nations Programme on HIV/AIDS (UNAIDS) finds donor government disbursements to combat HIV in low- and middle-income countries totaled US$7.8 billion in 2019, a reduction from the US$8 Billion in 2018 and nearly the same as the funding levels of a decade ago.

Half of the 14 donor governments analyzed in the study decreased their spending on global HIV efforts from 2018 to 2019; six increased; and one held steady. Donor government funding supports HIV care and treatment, prevention and other services in low- and middle-income countries.

The decline in funding was driven primarily by a decrease in bilateral funding from the United States, due to, flat funding from Congress for several years and a shrinking funding pipeline for programs, as well as the timing of disbursements. The decline is also attributable to declining funding from other donors, though to a lesser extent. While donors increased multilateral contributions to The Global Fund to Fight AIDS, Tuberculosis, and Malaria, UNAIDS, and UNITAID by more than $100 million, these gains were not enough to offset declines in bilateral funding. Since 2010, funding from donor governments other than the U.S. has declined by more than US$1 billion largely due to decreased bilateral support for HIV.

Even with its decreased funding, the United States remains the world’s largest donor government to HIV, disbursing US$5.7 billion in 2019, and ranking first in funding relative to the size of its economy. The next largest donor is the United Kingdom (US$646 million), followed by France (US$287 million), the Netherlands (US$213 million) and Germany (US$180 million).

These data feed into the broader UNAIDS global report, which examines all sources of funding for HIV relief, including local governments, non-governmental organizations and the private sector, and compares it the resources need to achieve goals related to testing and treatment. UNAIDS estimates that resources needed by the end of 2020 are US$26.2 billion, compared to US$19.8 billion currently available, leaving a gap of several billion dollars. This gap has grown in recent years as the number of people living with HIV in low and middle income countries has increased by 25% over the past decade and the number of new HIV infections remains high.

“Every dollar not invested today contributes to AIDS-related deaths and new HIV infections,” said Winnie Byanyima, Executive Director of UNAIDS. “In a world characterized by massive inequalities we must ramp up investments for realizing the right to health. It’s a shared responsibility, demanding more donor funding and domestic resources, including freeing up fiscal space through debt cancellation.”

“Donor governments continue their move away from funding HIV programs in low and middle income countries, while the number of people living with HIV continues to grow,” said KFF Senior Vice President Jen Kates. “This situation is likely to become more precarious in 2020 and beyond, as the effects of COVID-19 hit donor government budgets and take an increasing toll on health and economies around the world.” 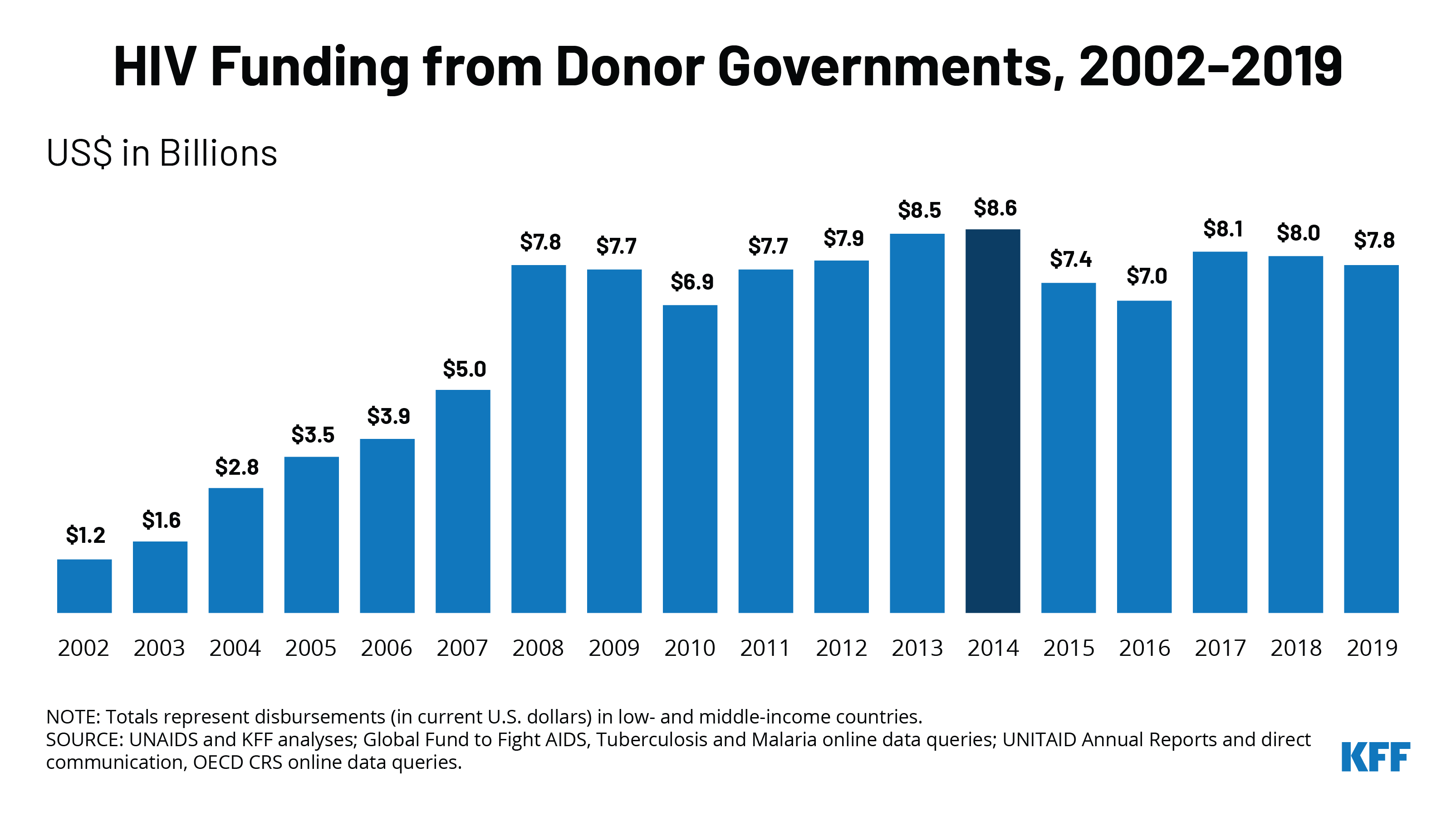 The new report, produced as a long-standing partnership between KFF and UNAIDS, provides the latest data available on donor government funding based on data provided by governments. It includes their bilateral assistance to low- and middle-income countries and contributions to the Global Fund, UNAIDS, and UNITAID.  “Donor government funding” refers to disbursements, or payments, made by donors.