A quick look at the public’s views of Medicaid, the government health insurance and long-term care program for low-income adults and children, from recent Kaiser Family Foundation polls.

Three-fourths (74 percent) of the public, including majorities of Democrats (84 percent), independents (76 percent), and Republicans (61 percent), hold a favorable view of Medicaid. 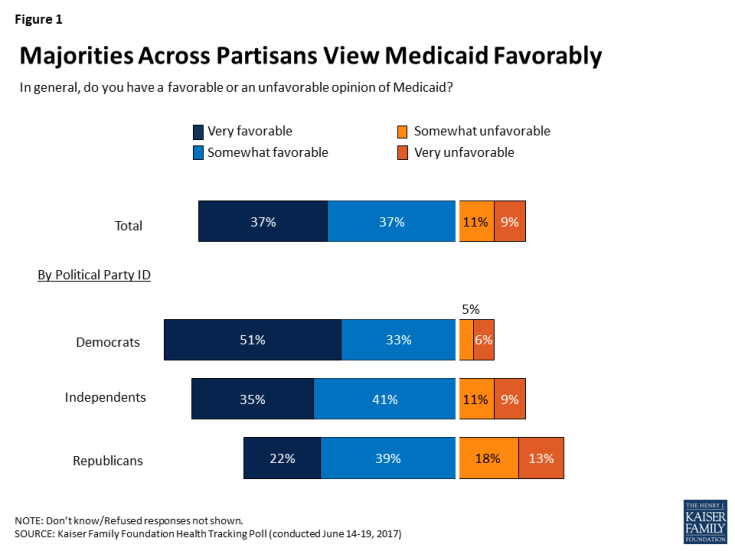 Majorities of Democrats, independents, and Republicans also say the program is “working well” both nationally and in their own state. 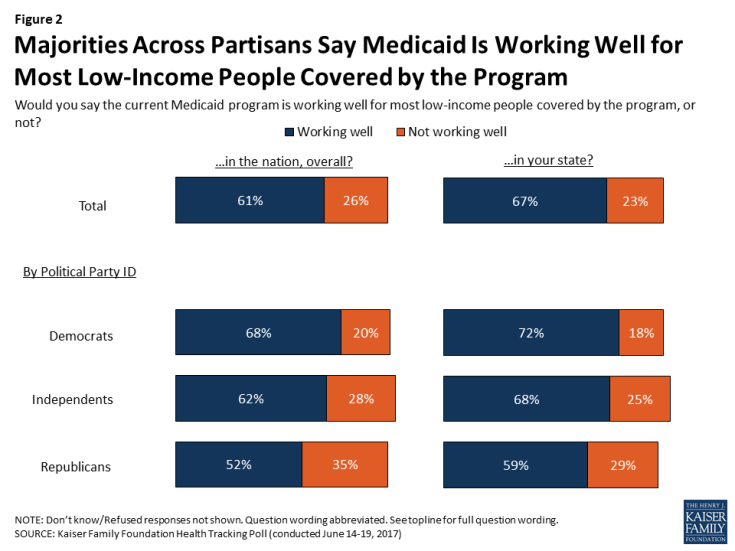 Figure 2: Majorities Across Partisans Say Medicaid Is Working Well for Most Low-Income People Covered by the Program

Both the ACA replacement legislation recently passed by the U.S. House and the plan currently being discussed in the Senate would decrease overall federal spending on Medicaid. When asked to think about the country’s health priorities in the federal budget, few (12 percent) say they want to see the president and Congress decrease spending on Medicaid while four in ten say they want increased spending (40 percent). About half (47 percent) say they want president and Congress to keep Medicaid spending about the same. 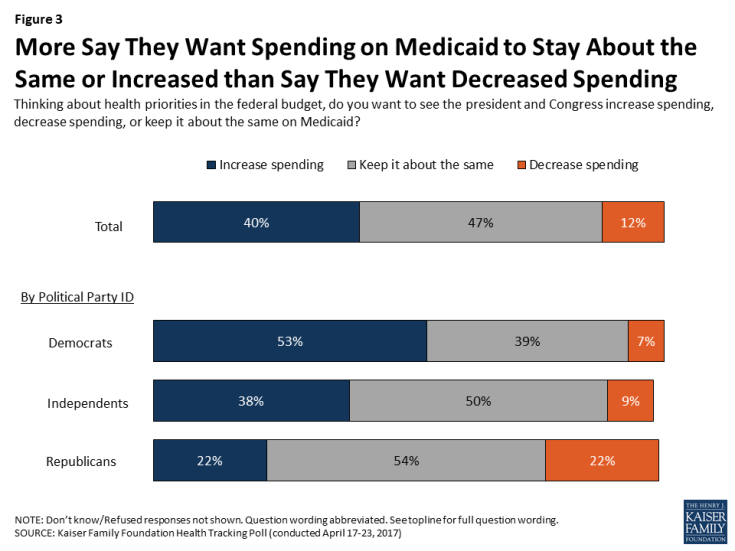 As part of the Affordable Care Act (ACA), some states expanded their Medicaid program to cover more low-income adults, with the federal government contributing most of the funding for this expansion. The Republican replacement plan proposes winding down this federal funding for Medicaid expansion by 2020. Overall, about one-third (36 percent) of the public supports reducing the federal funding included in the ACA for states that expanded Medicaid. There are differences among partisans with about half (51 percent) of Republicans supporting reducing this funding compared to one-fourth of Democrats and about one-third (35 percent) of independents. 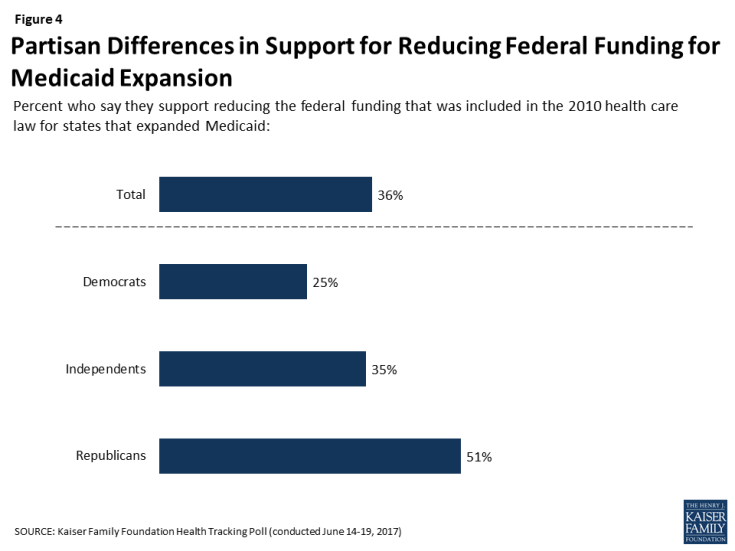 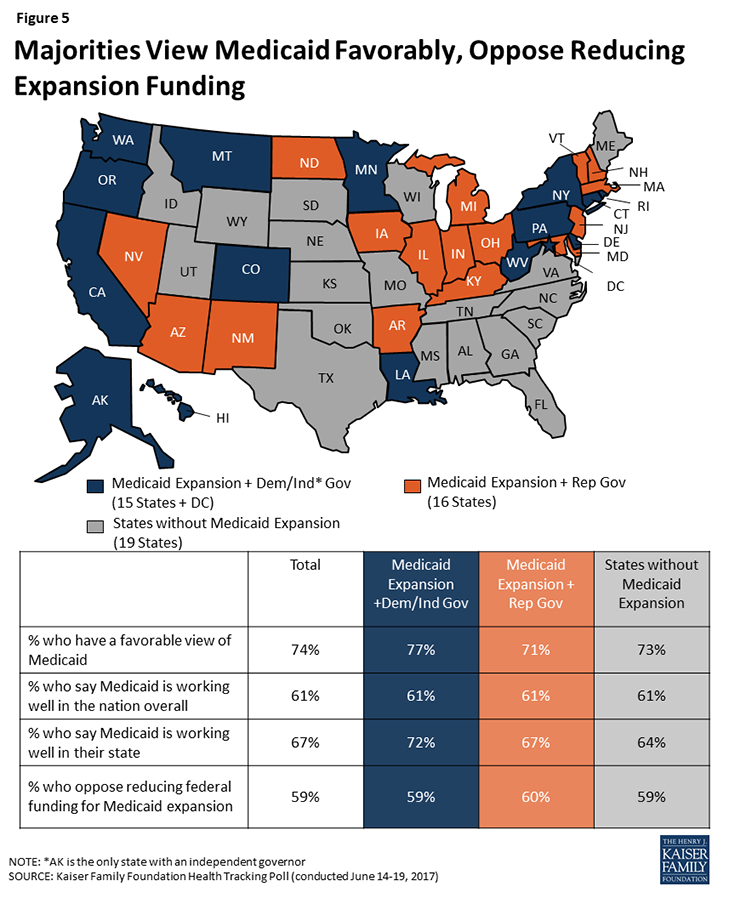 Currently, Medicaid is jointly financed by federal and state governments, with each state deciding how to structure benefits, eligibility, and care delivery within guidelines set by the federal government. Seven in ten (71 percent) Americans prefer keeping Medicaid largely as it is today while fewer (26 percent) support changing Medicaid to limit what the federal government spends over time and allowing states more flexibility in determining which groups of people and what services are covered under the program. Republicans are more divided with equal shares supporting changing the system (48 percent) as support keeping it largely the same (47 percent). 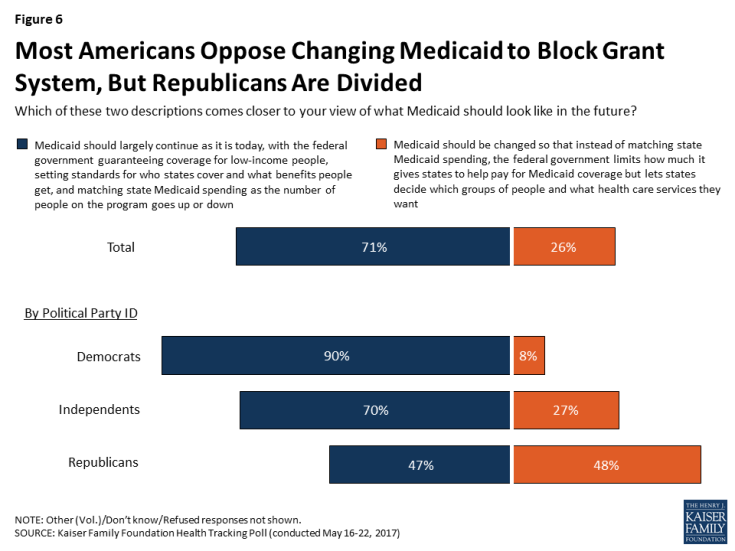 When asked about the health care plan that recently passed the U.S. House of Representatives, about four in ten are aware that the AHCA makes “major reductions” to the Medicaid program over the next 10 years. 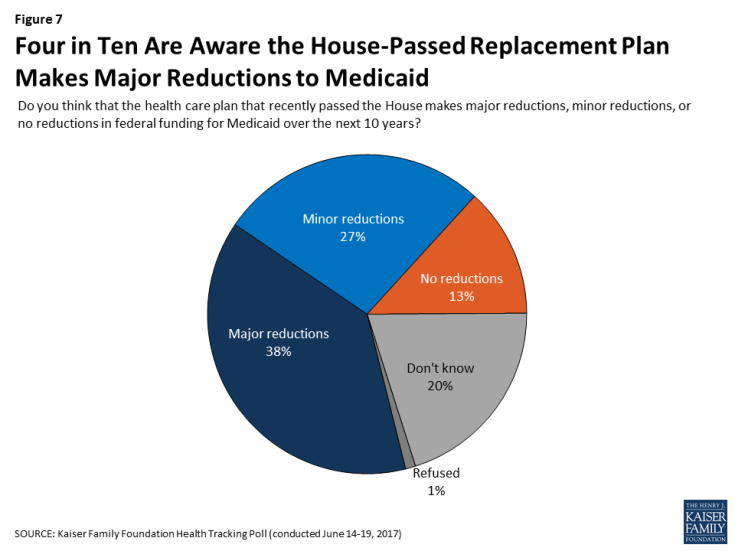 The majority of the public support allowing states to impose work requirements for non-disabled adults (70 percent) and to require drug-testing (64 percent) for Medicaid beneficiaries. Fewer support changes that are included in the Republican replacement plan like stopping federal payments to Planned Parenthood for one year (30 percent), or limiting federal funding for Medicaid coverage of long-term care for seniors and people with disabilities (21 percent). 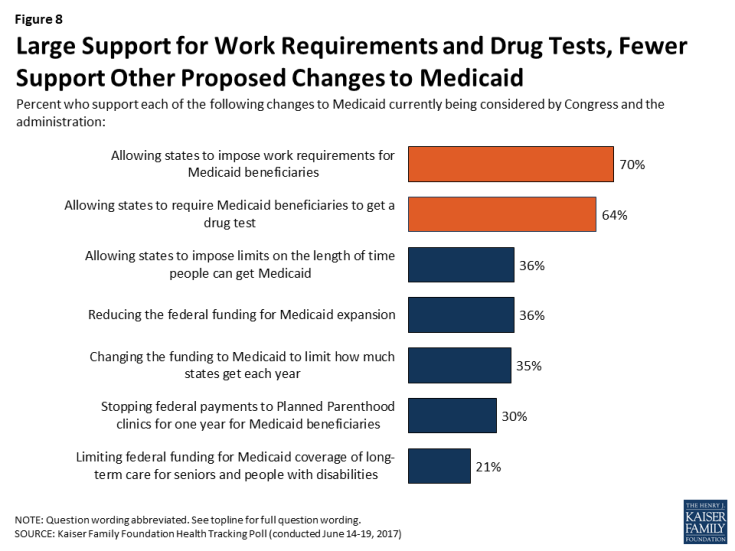 #9: Partisan Differences in How Medicaid Is Viewed 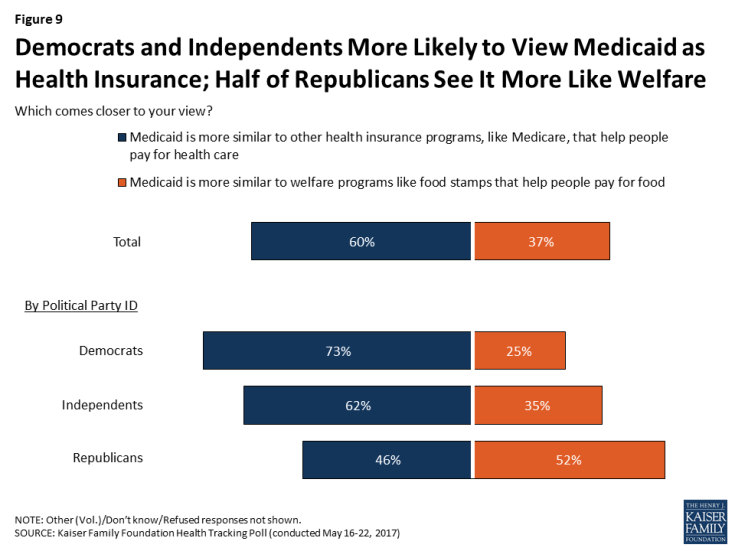 Figure 9: Democrats and Independents More Likely to View Medicaid as Health Insurance; Half of Republicans See It More Like Welfare

#10: Large Shares of the Public Say Medicaid is Important to Them

Despite all of the partisan differences, large shares of the public  – including majorities of Democrats and independents and nearly half of Republicans – say Medicaid is either “very” or “somewhat” important for them and their family. 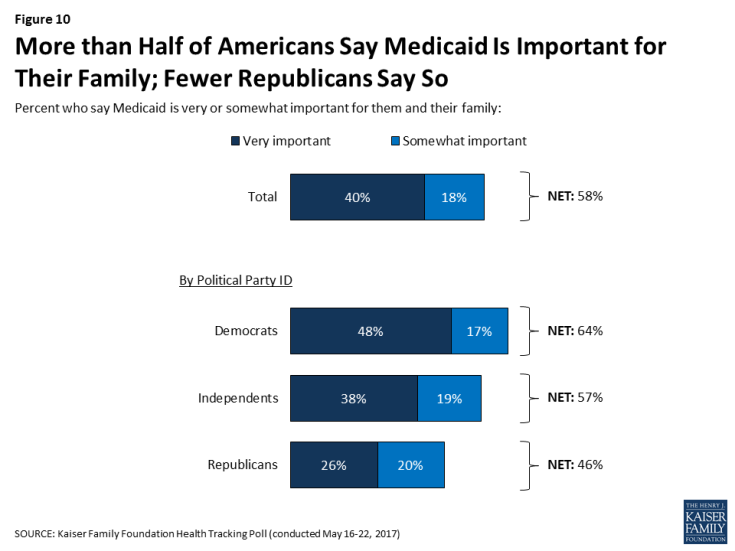 Figure 10: More than Half of Americans Say Medicaid Is Important for Their Family; Fewer Republicans Say So