Republicans Have an Edge in Voter Enthusiasm Heading Into Fall, But Few Cite ACA as Motivating Factor

The latest Kaiser Family Foundation Health Tracking Poll finds Republicans with a modest edge in terms of voter enthusiasm, but the Affordable Care Act, also called Obamacare, is not the main motivator.

The poll finds that 27 percent of Republicans say they are “more enthusiastic” about voting this year than in past Congressional elections, compared with 20 percent of Democrats and 18 percent of independents.

Asked to say in their own words why they’re more excited about voting this year, the most common response among enthusiastic voters relates to a desire to elect more Republicans or help Republicans gain control of the Senate (13%).  Just 3 percent mention the health care law specifically. 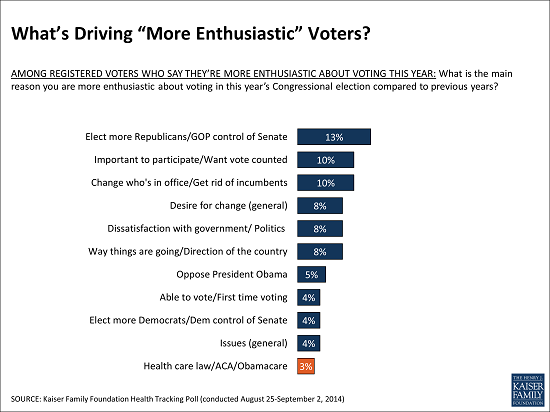 The findings come from the Foundation’s August-September poll, which includes a special look at registered voters’ views and what role, if any, the ACA might be playing in the upcoming midterm election. The survey was released at a joint Kaiser Family Foundation/Cook Political Report briefing in Washington.

Nationally about half of voters (53%) report seeing some type of political or issue advertising related to the health care law in the previous 30 days, and nearly three times as many say that most ads were opposed to the law (20%) as say most were in support of it (7%).

Among voters in the 11 states with the most competitive Senate races as rated by The Cook Political Report, more than seven in ten (72%) report seeing ads related to the health care law, and the balance is even more heavily tilted against the law (34% saw more ads in opposition; 4% saw more ads in support). 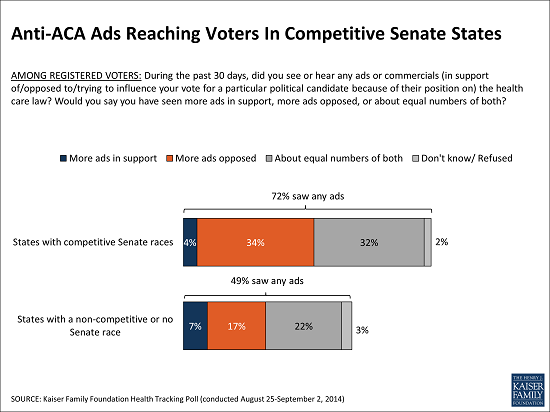 The law’s opponents are clearly more interested in continuing the debate: Among Republican voters and those with an unfavorable view of the law, about six in ten want candidates to keep up the debate, while similarly large shares of Democrats and those who view the law favorably say they should move on to other issues.

When asked to name in their own words the two most important issues in deciding their vote for Congress, the most frequently-mentioned issue is the economy and jobs (21%). Fewer voters cite health care (13%, including just 3% who specifically mention the Affordable Care Act or Obamacare). Mentions of health care are similar among Democrats (15%) and Republicans (16%), but lower among independent voters (9%).

As a voting issue, health care is clustered with a number of other issues, including foreign policy/national defense/terrorism (13%), dissatisfaction with the way government is working (12%), immigration and border security (9%), and education (9%).

The poll also shows that national issues like the ACA are only one factor influencing voters.  About a third (34%) of registered voters say specific national issues will make the biggest difference in how they vote for Congress, while about a quarter each say their vote will be mostly based on the candidate’s character and experience (24%) or local or state issues (23%), and one in 9 (11%) say the candidate’s party affiliation will be the most important factor.

The latest tracking poll was designed and analyzed by public opinion researchers at the Kaiser Family Foundation and was conducted from August 25-September 2 among a nationally representative random digit dial telephone sample of 1,505 adults ages 18 and older, including 1,239 who said they were registered to vote. Interviews were conducted in English and Spanish by landline (753) and cell phone (752). The margin of sampling error is plus or minus 3 percentage points for the full sample and for registered voters. For results based on other subgroups, the margin of sampling error may be higher.