Facebook Twitter LinkedIn Email Print
Medicaid, the nation’s health coverage program for poor and low-income people, provides millions of low-income women across the nation with health and long-term care coverage. Women comprise the majority of the adult Medicaid population—before the passage of the Affordable Care Act (ACA) and today. For women, the program offers coverage of a wide range of primary, preventive, specialty, and long-term care services which are important to them across their lifespans. Given the critical lifeline that the program provides for low-income women and their families, changes to the program financing and structure have significant implications for low-income women’s access to coverage and care. This fact sheet presents key data points describing the current state of the Medicaid program as it affects women.

In 2014, the most recent date that national enrollment statistics are available, women comprised 36% of the overall Medicaid population and the majority of adults on the program (Figure 1). Prior to the ACA, women were more likely to qualify for Medicaid because of their lower incomes and because they were more likely to belong to one of Medicaid’s categories of eligibility: pregnant, parent of a dependent child, senior, or disability. The ACA, as signed by President Obama, eliminated these categories by extending Medicaid eligibility to all individuals with incomes up to 138% of the federal poverty level (FPL).1 The 2012 Supreme Court ruling in National Federation of Independent Business v. Sebelius however made the Medicaid expansion optional for states, resulting in inconsistent coverage policies across the country. 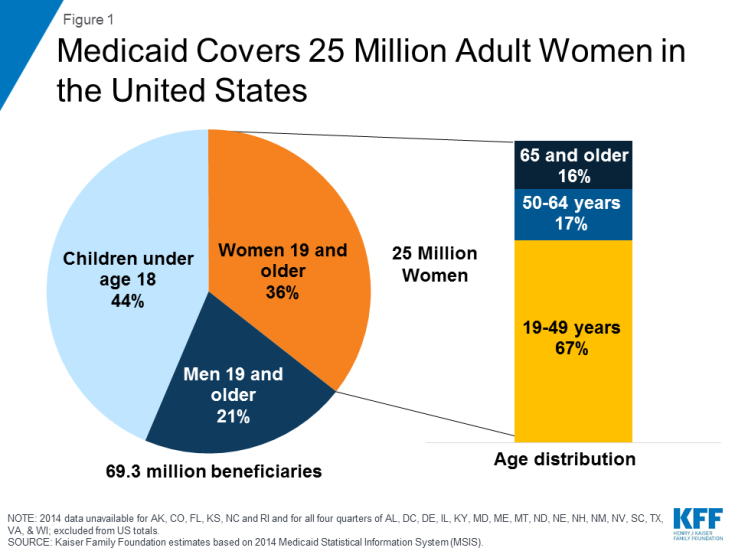 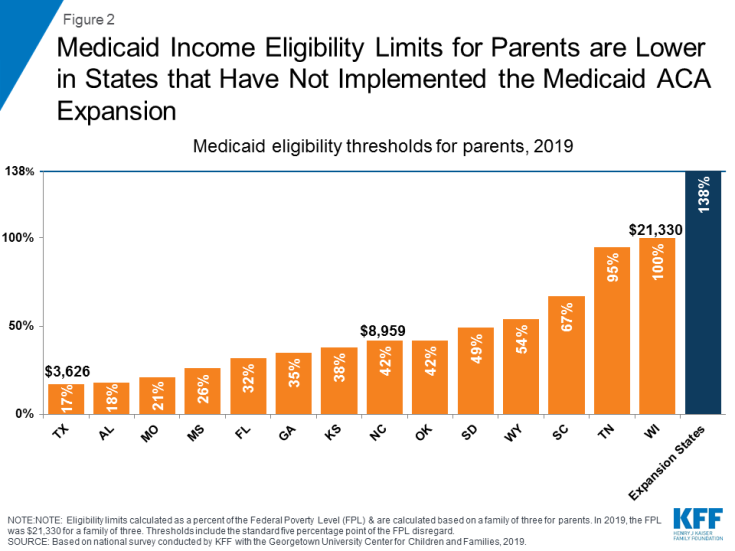 Profile of Women on Medicaid

The diverse population of women covered by Medicaid face many social, economic, and health challenges that affect their ability to receive timely and high quality health care. 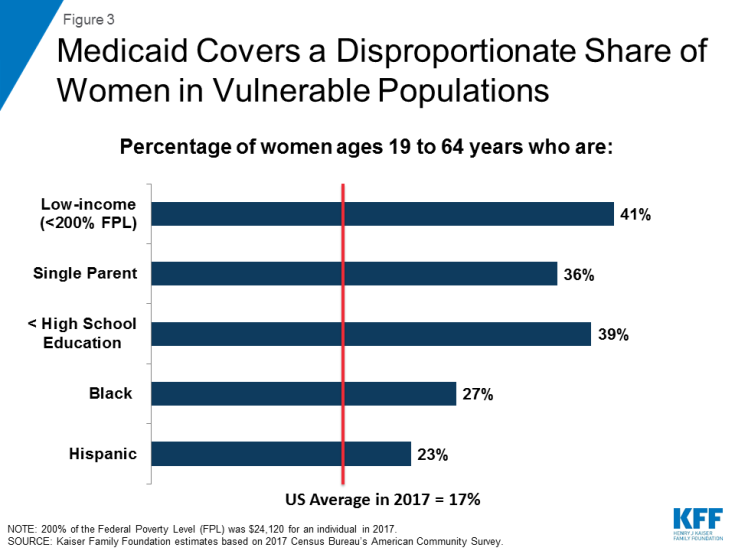 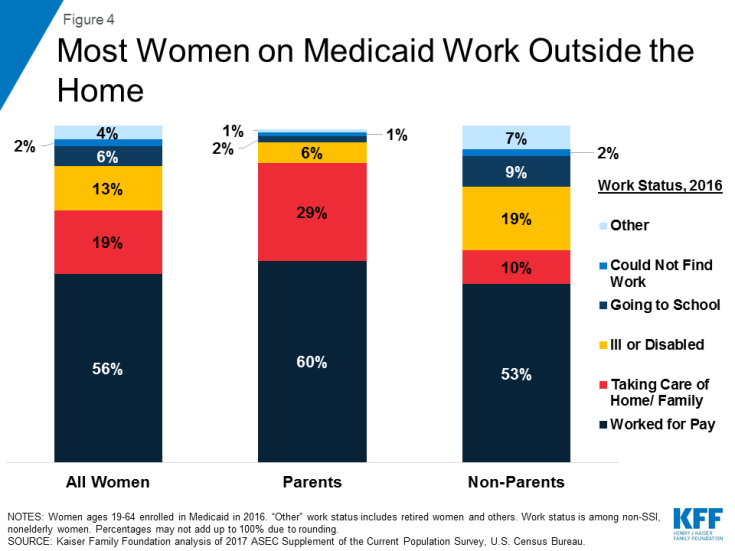 Figure 4: Most Women on Medicaid Work Outside the Home 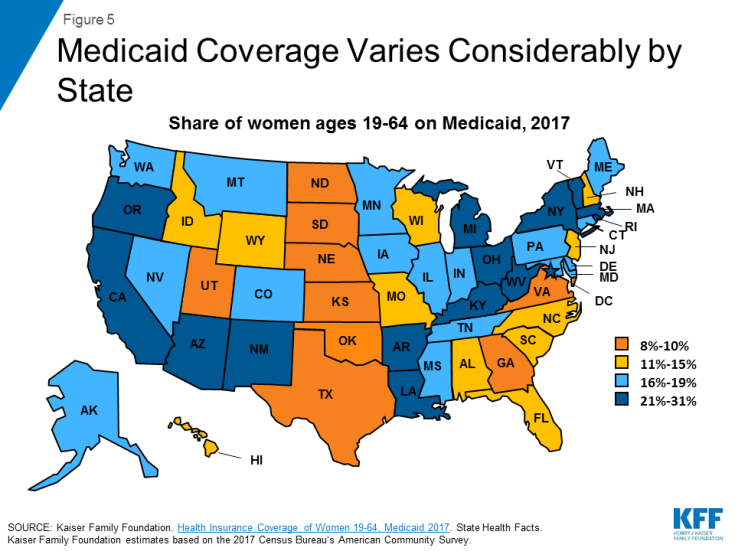 Roughly two-thirds (67%) of adult women on Medicaid are in their reproductive years (19 to 49). Medicaid covers a wide range of reproductive health care services, including family planning, and pregnancy-related care including prenatal services, childbirth, and postpartum care—all without cost-sharing. Medicaid coverage of abortion services, however, is very limited under federal law and in most states.

Federal law requires state Medicaid programs to offer family planning benefits, but states determine the specific services and supplies for those who qualify through pre-ACA pathways. For the ACA expansion populations, the ACA requires states to cover 18 FDA approved contraceptive methods, counseling on STIs and HIV, and screening for breast and cervical cancers for private insurance and individuals who qualify as a result of the Medicaid expansion. Research has found that most states have aligned their benefits and cover these services across all eligibility groups.

Medicaid is the largest single payer of pregnancy-related services, financing 43% of all U.S. births in 2016. In five states and DC, Medicaid covers more than 60% of all births. By federal law, all states provide Medicaid coverage without cost sharing for pregnancy-related services to pregnant women with incomes up to 133% of the federal poverty level (FPL) and cover them up to 60 days postpartum.

The federal Hyde Amendment prohibits federal spending on abortions, except in cases of rape, incest, or when the woman’s life is in danger (Figure 6). States may use their own unmatched funds to cover abortions in other circumstances. As of January 2019, 15 states cover abortions for Medicaid beneficiaries that are considered to be “medically necessary” and pay for these using only state funds. A January 2019 U.S. Government Accountability (GAO) report found that 14 states were not covering medication abortions, even when the abortion was eligible for federal funding, in violation of federal law. One state, South Dakota, has not covered abortions in cases of rape or incest for 25 years. 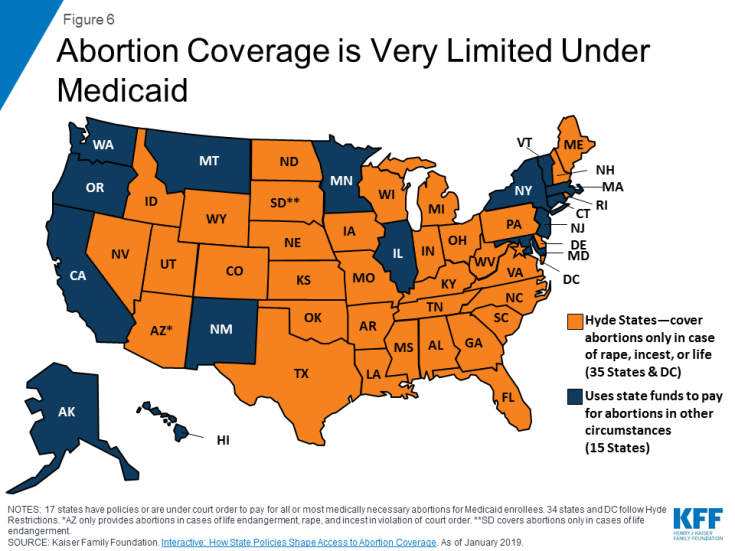 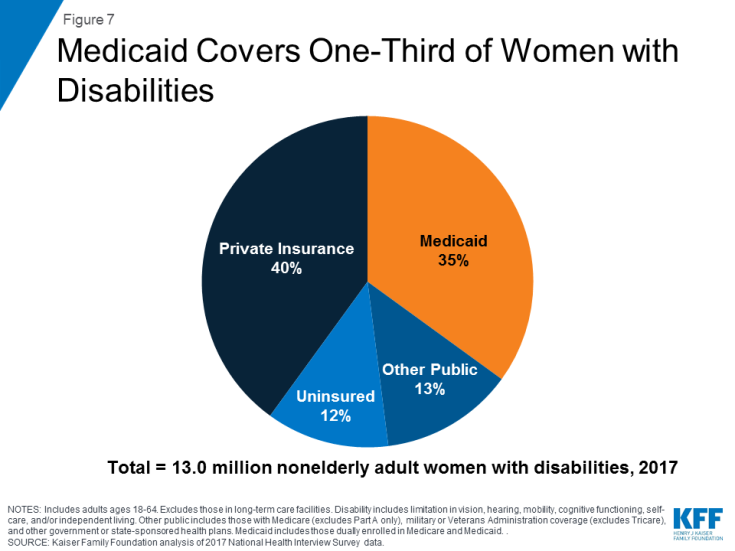 While most seniors have coverage through Medicare, many who are very low-income can also qualify for Medicaid, and are referred to as “dual eligible.” Dual eligible beneficiaries typically qualify for both programs because they are 65 and older or younger persons with serious disabilities who have very low incomes. They tend to have extensive and costly health needs, but only those who are very poor or face very high medical costs can qualify. 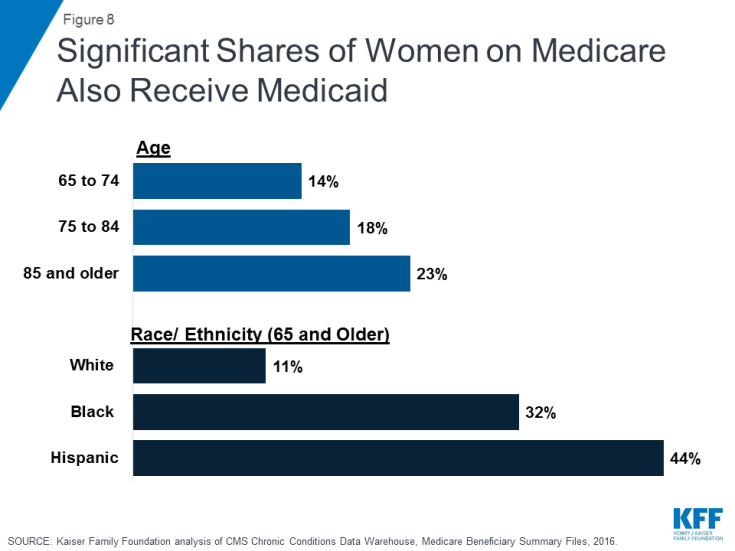 Compared to their uninsured counterparts, women with Medicaid experience fewer barriers to care and on several measures have utilization rates comparable to women with private insurance. 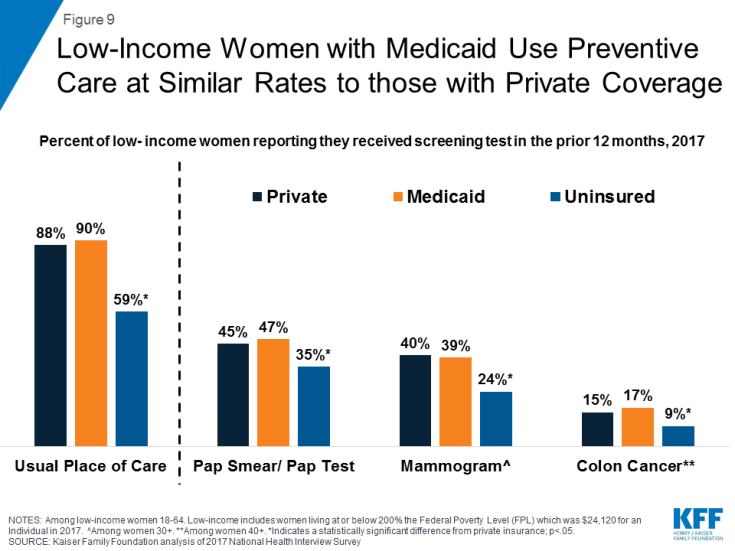 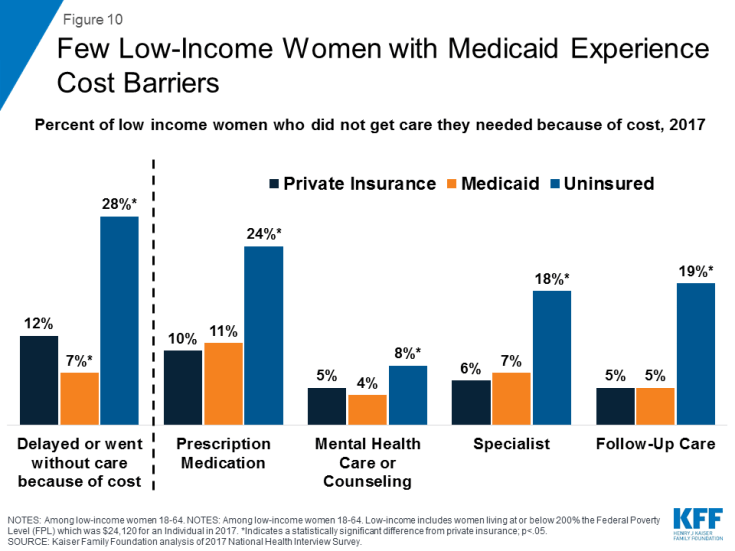