One of the elements of the Affordable Care Act that has received considerable national attention is the requirement that employers that provide health insurance to their workers must include coverage for all FDA approved contraceptive services and supplies.1 This requirement has been at the center of a case that has now reached the Supreme Court. The plaintiffs, Hobby Lobby and Conestoga Wood Specialties, are two for-profit corporations contending that the requirement that they include coverage for certain contraceptive services (emergency contraceptive pills and intrauterine devices) in their insurance plans “substantially burdens” both the corporation’s and the owners’ religious rights. In the March 2014 oral arguments, several of the justices discussed the extent to which the corporations did or not did not have a choice in offering coverage to their workers. In this brief, we explore some of the factors influencing coverage decisions and possible consequences2 for women and employers given two possible Supreme Court decision options: either upholding the contraceptive coverage requirement as it applies to Hobby Lobby or in favor of Hobby Lobby. For ease of using one example, we will use Hobby Lobby in this brief. Any decision will apply to both companies.

Hobby Lobby is seeking relief from the contraceptive requirement on religious grounds. Depending on the court’s decision and Hobby Lobby’s response, there are multiple possible outcomes. Figure 1 illustrates two possible decisions and the potential impact on coverage, but the Court also could craft a decision that finds a middle ground. If Hobby Lobby provides employer sponsored insurance that does not include the full range of FDA approved methods then they will be forced to pay a steep penalty of $100 per day per enrollee, estimated to be almost $564 million a year for Hobby Lobby,3 a fine they say would lead them to bankruptcy. Alternatively, they state that the other option of not insuring their workers would be inconsistent with their religious beliefs to care for their workers, and it would also require them to pay an “Employer Shared Responsibility Payment” which is a $2,000 tax per full-time employee (excluding the first 30 employees) per year. With 16,000 full-time employees, Hobby Lobby would have to pay almost $32 million per year.4 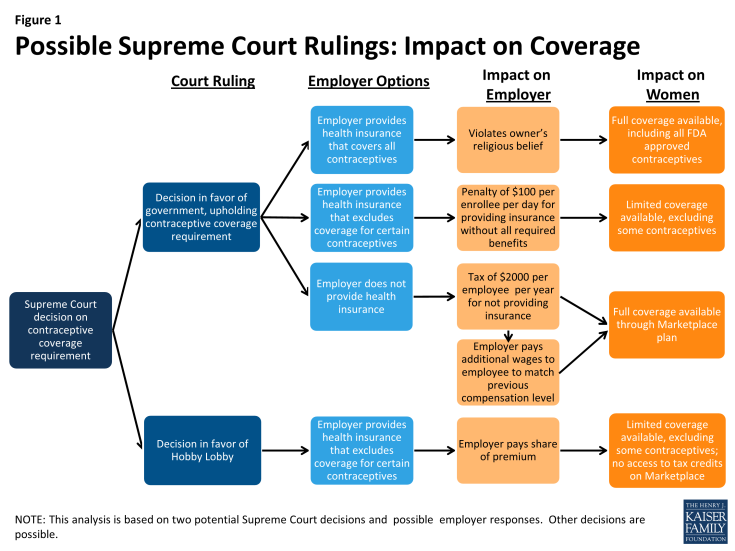 During the oral argument, the Supreme Court Justices discussed what would be the impact if Hobby Lobby did not provide health coverage to its employees and instead paid the tax.5 Justice Sotomayor noted: “The briefs on both sides are written as if the penalty for not having a health insurance policy that covers contraceptives is at issue. But isn’t there another choice nobody talks about, which is paying the tax, which is a lot less than the penalty and a lot less than the cost of health insurance at all?” Justice Kagan echoed Justice Sotomayor and said “There’s a choice. And so the question is: why is there substantial burden at all?”

In their brief, Hobby Lobby asserts that it will suffer “significant competitive disadvantages in hiring and retaining employees” if it were to discontinue its plan.7 This point was raised by Justice Scalia: “Well of course it wouldn’t be the same price at the end of the day. If they deny health insurance, they’re going to have to raise wages if they are going to get employees.” Justice Kennedy questioned: “Let’s assume that the cost of providing insurance is roughly equivalent to the $2000 penalty. How – how is the employer hurt? He can just raise the wages.”

The Justices were attempting to estimate whether a financial burden would be placed on Hobby Lobby by dropping their health insurance and paying the $2,000 per employee tax. This is a very complicated equation with many variables including how much Hobby Lobby contributes toward health insurance for their workers, how comprehensive the plan is, household income, family size, and the workers’ wages.

There are many reasons that insurance coverage is a good way to compensate workers from a business and tax perspective.8 Employees are not taxed on the employer’s contribution toward health insurance premiums, which reduces their overall tax liability. In addition, in the pre-ACA marketplace, it was difficult for individuals to buy affordable health insurance comparable to employer sponsored insurance. Many plans sold on the individual market either excluded or charged substantially more for coverage to many individuals with pre-existing conditions. The ACA introduced new variables into the equation by making premium subsidies available to low and modest income individuals, and ending higher pricing and coverage restrictions for pre-existing conditions.

Today, the value of employer sponsored insurance is shaped by worker income, with the value greater to higher income workers who benefit from the tax exclusions because they pay a higher tax rate and are not eligible for premium tax credits available on the Marketplace.9 Lower income workers, on the other hand do not benefit as much from this tax exclusion, since their tax rate is lower, and may now qualify for premium tax credits on the Marketplace.10 However, if their employer offers coverage, workers are not eligible for premium tax credits, regardless of how low their household income is.

Employee costs to obtain coverage on the Marketplace and the level of assistance for which they would qualify depend on their age, family size, household income, and where they live. Instead of offering employer sponsored insurance, firms could adjust workers’ compensation to offset the loss of that coverage, and enable workers to purchase insurance on the Marketplace. Firms, however, are not permitted to pay workers with the same job different amounts based on whether the worker qualifies for premium tax credits, but could make an adjustment based on the aggregate characteristics of their workforce.

The Supreme Court is expected to issue its decision by the end of June 2014. While the Court could write a nuanced opinion that finds a middle ground, it is instructive to consider the coverage and cost implications on the workers and the employers of the two decisions on each extreme: The Court either finds that Hobby Lobby must comply with the contraceptive requirement, or that Hobby Lobby does not need to comply with the contraceptive requirement because it violates their religious rights.

If the Court decides that Hobby Lobby must comply with the contraceptive coverage requirement, Hobby Lobby will likely choose to stop providing health insurance, given the litigation around the violation of religious rights and the very high costs of the $100 per employee penalty for not providing the required benefits. In this outcome, the option of paying a $2000 tax per employee seems to be the most likely outcome. This $2,000 tax per employee is not deductible as a business expense like health insurance or wages. Without information about Hobby Lobby’s sponsored insurance and characteristics of their workforce, it is not possible to estimate Hobby Lobby’s specific costs or savings of not offering health insurance to their workers or make a direct comparison to a plan on a Marketplace.11

If Hobby Lobby were to adjust their worker’s compensation to offset the loss of employer sponsored insurance and maintain a competitive advantage, the amount and form of compensation will depend on a number of factors including: Hobby Lobby’s prior contribution toward worker coverage, the type of coverage, the age and income distribution of their workforce, and labor market conditions. As we discussed earlier, there would be different tax consequences for employees of varying incomes if they were to receive additional compensation in the form of wages rather than health insurance. Hobby Lobby could adjust compensation in various ways other than increased wages by offering additional vacation time, retirement, or other wellness benefits, that may be attractive to higher wage workers.12

If, however, the Supreme Court exempts Hobby Lobby from the requirement that they include all prescribed FDA approved contraceptives as the ACA requires, some female employees and dependents who are covered by Hobby Lobby’s health insurance may either have to go without their preferred contraceptive method, pay out of pocket, or seek subsidized services at a government funded clinic. Intrauterine devices (IUDs), one of the contraceptives that Hobby Lobby has objected to, are the most effective form of contraceptives, but they also have more upfront charges, as the average cost of an IUD including insertion is over $1,000. In this case, the objection is to IUDs and emergency contraceptive pills, but it would be easy to envision that other corporations with religious objections to the full range of contraceptives would eliminate coverage of all contraceptive methods from their plans if this avenue were available to them. The “burden” of the costs of contraceptive care would be placed on the women and in some cases on the taxpayers who will pay for care at subsidized clinics, if they are available to the women.

Clearly, the impact of the Supreme Court’s decision will likely be far-reaching, affecting not only the corporations that are objecting to the requirement but also the scope of coverage and out of pocket costs, and contraceptive choices that the women workers and their dependents will have to make.