The economic downturn and change in Administration are likely to bring renewed attention to gaps in Medicaid coverage in states that have not expanded eligibility under the Affordable Care Act (ACA). In recent months, millions have gained health insurance coverage through Medicaid as a result of the economic effects of the pandemic as well as the maintenance of eligibility and continuous coverage requirements tied to access to temporary enhanced Medicaid matching funds. However, in the 12 states that have not adopted the Medicaid expansion as of January 2021, Medicaid eligibility for adults remains limited. At a time when many are losing income and potentially health coverage during a health crisis, these eligibility gaps leave many without an affordable coverage option and could contribute to growth in the uninsured rate. The Biden Administration is likely to make coverage expansion for low-income populations a priority, including filling in the “coverage gap” that exists for adults in non-expansion states.

Adults who fall into the coverage gap have incomes above their state’s eligibility for Medicaid but below poverty, the minimum income eligibility for tax credits through the ACA marketplace (Figure 1). Medicaid eligibility for adults in states that did not expand their programs is quite limited: the median income limit for parents in these states is just 41% of poverty, or an annual income of $8,905 for a family of three in 2020, and in nearly all states not expanding, childless adults remain ineligible.1 Because the ACA envisioned low-income people receiving coverage through Medicaid, it does not provide financial assistance to people below poverty for other coverage In contrast, in states that have adopted the ACA Medicaid expansion, Medicaid eligibility is extended to nearly all low-income individuals with incomes at or below 138 percent of poverty ($17,609 for an individual in 20202). 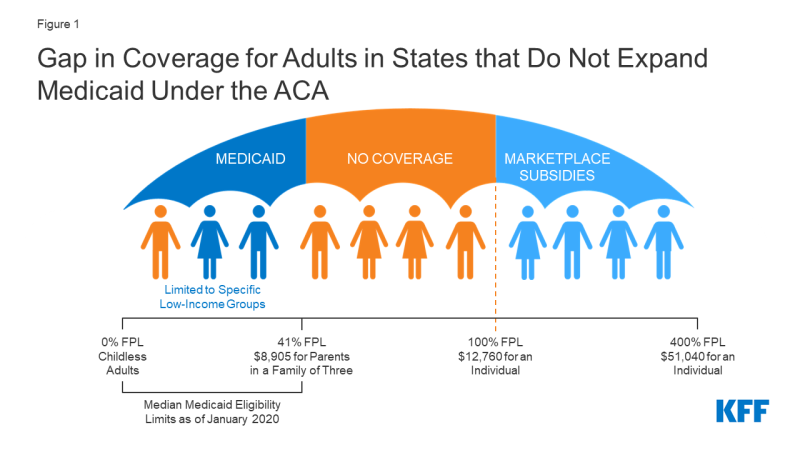 This brief presents estimates of the number of people in non-expansion states who could be reached by Medicaid if their states adopted the expansion and discusses the implications of them being left out of ACA coverage expansions. It is based on coverage data from 2019, the most recent year available. Because this data predates the pandemic and associated job and income loss, it is likely that the number of people in the coverage gap has grown since the start of the pandemic, and these estimates may be a lower bound of how many people are currently in the coverage gap. An overview of the methodology underlying the analysis can be found in the Data and Methods, and more detail is available in the Technical Appendices.

Nationally, more than two million3 poor uninsured adults fell into the “coverage gap” that results from state decisions not to expand Medicaid (Table 1), meaning their income was above Medicaid eligibility but below the lower limit for Marketplace premium tax credits. These individuals would be eligible for Medicaid had their state chosen to expand coverage. Reflecting limits on Medicaid eligibility outside ACA pathways, most people in the coverage gap (77%) are adults without dependent children.4

The geographic distribution of the population in the coverage gap reflects both population distribution and regional variation in state take-up of the ACA Medicaid expansion. The South has relatively higher numbers of poor uninsured adults than in other regions, has higher uninsured rates and more limited Medicaid eligibility than other regions, and accounts for the majority (8 out of 12) of states that opted not to expand Medicaid.5 As a result, the vast majority of people in the coverage gap in 2019 reside in the South (Figure 2). 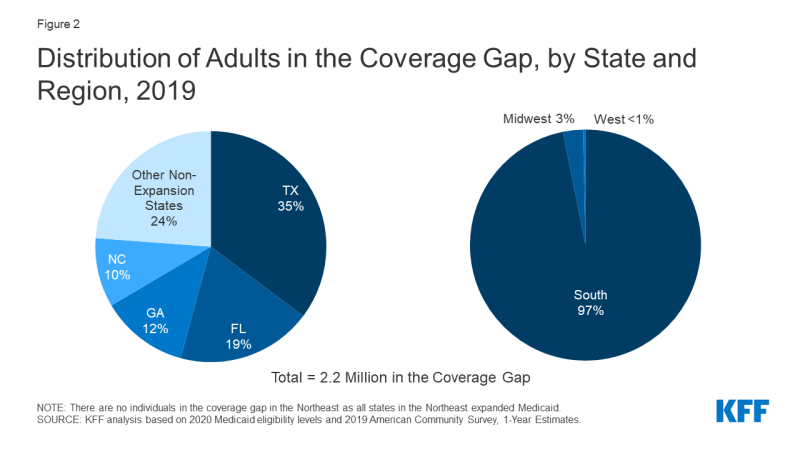 Figure 2: Distribution of Adults in the Coverage Gap, by State and Region, 2019

If states that are currently not expanding their programs adopt the Medicaid expansion, all of the nearly 2.2 million adults in the coverage gap would gain Medicaid eligibility. In addition, 1.8 million uninsured adults with incomes between 100 and 138% of poverty6 (most of whom are currently eligible for Marketplace coverage) would also gain Medicaid eligibility (Figure 3 and Table 1). Though most of these adults are eligible for substantial tax credits to purchase Marketplace coverage,7 Medicaid coverage would likely provide more comprehensive benefits and lower premiums or cost-sharing than they would face under Marketplace coverage. For example, research from early implementation of the ACA showed that coverage of behavioral health services, prescription drugs, rehabilitative and habilitative services, and long-term services and supports may be more limited in the Marketplace compared to Medicaid.8,9 In addition, research examining the population with incomes between 100-138% FPL in expansion and non-expansion states finds that Medicaid expansion coverage produced far greater reductions than subsidized Marketplace coverage in average total out-of-pocket spending, average out-of-pocket premium spending, and average cost-sharing spending. 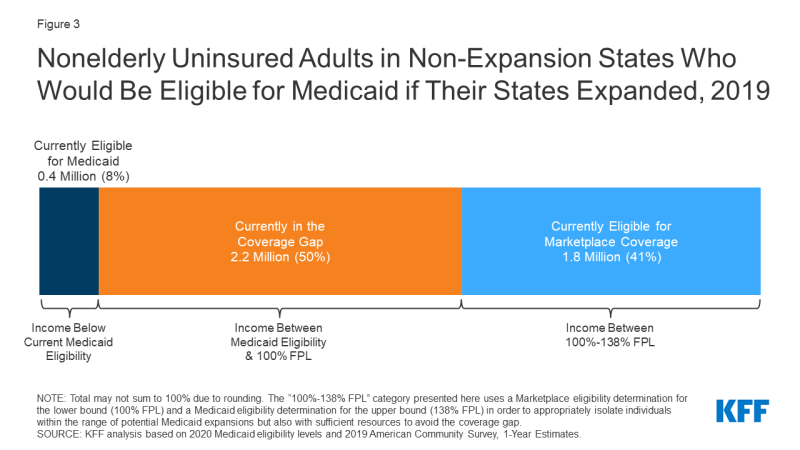 Figure 3: Nonelderly Uninsured Adults in Non-Expansion States Who Would Be Eligible for Medicaid if Their States Expanded, 2019

A smaller number (about 356,000) of uninsured adults in non-expansion states are already eligible for Medicaid under eligibility pathways in place before the ACA. If all states expanded Medicaid, those in the coverage gap and those who are instead eligible for Marketplace coverage would bring the number of nonelderly uninsured adults eligible for Medicaid to more than 4.3 million people in the twelve current non-expansion states. The potential number of people who could be reached by Medicaid expansion varies by state (Table 1).

At a time when many need health care services due to the health care crisis or face loss of financial security due to the economic downturn, millions fall into the Medicaid coverage gap due to their state’s decision not to expand eligibility. The ACA Medicaid expansion was designed to address historically high uninsured rates among low-income adults, providing a coverage option for people with limited access to employer coverage and limited income to purchase coverage on their own. In states that expanded Medicaid, millions of people gained coverage, and the uninsured rate dropped significantly as a result of the expansion. However, with many states opting not to implement the Medicaid expansion, millions of uninsured adults remain outside the reach of the ACA and continue to have limited options for affordable health coverage. In 2019 the uninsured rate in non-expansion states was nearly double that of expansion states (15.5% vs. 8.3%).

By definition, people in the coverage gap have limited family income and live below the poverty level. They are likely in families employed in very low-wage jobs, employed part-time, or with a fragile or unpredictable connection to the workforce. Given the economic downturn and limited offer rates of employer-based coverage for employees with these work characteristics, it is likely that employer-based coverage is not a viable option for them.

There is no deadline for states to opt to expand Medicaid under the ACA, and debate continues in some states about whether to expand. In 2020, two states (Missouri and Oklahoma) adopted the Medicaid expansion via ballot initiatives, and both states plan to implement expansion in mid-2021 (these states are considered Medicaid expansion states in this analysis). In addition, there will be new federal focus on encouraging expansion, either through legislative or Administrative actions. Biden has proposed creating a Medicare-like public option plan, which would be available to anyone and automatically cover people with low incomes in states that have not expanded Medicaid. Other possible legislative actions include reinstating the 100% matching for states that newly adopt the expansion for a period of time (the current match rate for the expansion is 90%). The Biden Administration could also can revise current demonstration waiver policy or promote new waivers to focus on expanding coverage. Whether, and to what extent, these actions are implemented and extend Medicaid to people currently in the coverage gap will be a key policy issue for the upcoming year.