Medicaid Coverage of Pregnancy-Related Services: Findings from a 2021 State Survey

The Medicaid program finances more than four in ten (42%) births in the United States, and more than half of births in several states. In recent years, policymakers have devoted new attention to maternal health in response to rising rates of pregnancy-related deaths and the substantially higher rates experienced by Black and American Indian and Alaska Native (AIAN) people. This is a particular concern for the Medicaid program, which finances approximately two-thirds of births among Black and AIAN individuals nationally.

The range of pregnancy-related services that states cover is shaped by many factors, with federal law setting the following baseline requirements that states must follow:

While federal law establishes a floor for benefits and eligibility, states have significant latitude to set income eligibility levels, define specific maternity care services, and apply utilization controls such as prior authorization and preferred drug lists (PDL). To understand how states cover reproductive health services under Medicaid, KFF (Kaiser Family Foundation) and Health Management Associates (HMA) conducted a survey of states between June 2021 and October 2021 about the status of Medicaid benefit policies across the nation. This report presents findings on states’ coverage of maternity care services under Medicaid as of July 2021. Forty-one states and the District of Columbia responded to the survey. States that did not respond to the survey are: Arkansas, Georgia, Kentucky, Minnesota, Nebraska, New Hampshire, New Mexico, Ohio, and South Dakota. Key themes from the survey findings are summarized in Figure 1. A companion report with findings on coverage of family planning benefits is available here. 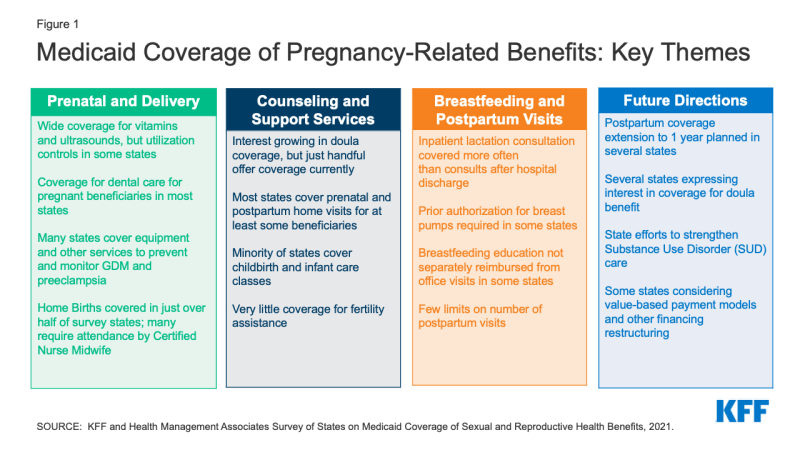 Several states are considering efforts to enhance maternity benefits, particularly extending the postpartum coverage period, adding doula benefits, and developing targeted initiatives to address substance use disorders for pregnant and postpartum beneficiaries. Under federal Medicaid rules, pregnancy-related coverage lasts through 60 days postpartum, but in recent years, there has been interest in extending coverage through the first year postpartum among policymakers at the federal and state levels. Extending postpartum Medicaid coverage was the most commonly reported new initiative that states are considering with regard to maternal health. KFF is tracking state activity on this policy, and the most up to date information is available in this tracker.

While few states had doula benefit in place as of July 2021, at least 11 other states are considering adding coverage for doula benefits, including four states reporting they planned to begin coverage by the end of 2022. A number of states also reported that they are trying to strengthen care for pregnant and postpartum beneficiaries with substance use disorders, with a focus on improving access to treatment services.