The survey finds that affordability of health care is a concern for many Texans, more so than affordability of other basic needs such as housing and transportation. Over half (55 percent) of Texas residents say it is difficult them and their family to afford health care, including a quarter who say it is “very difficult” (Figure 1). Fewer report finding it difficult to afford the cost of their rent or mortgage (45 percent), monthly utilities (42 percent), gasoline or other transportation costs (37 percent), or food (36 percent). 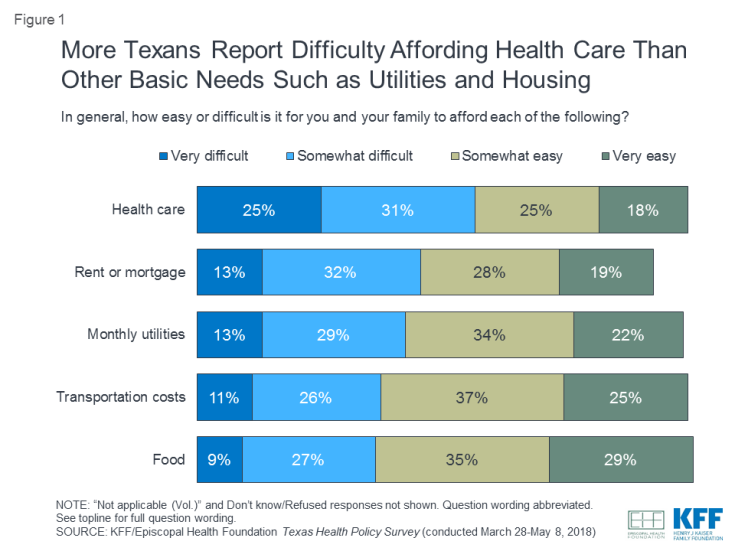 Poll: 38% of Texans say they or someone in their household had problems paying medical bills in the past year; most of this group say it had a major impact.

In addition to general difficulty affording care, about four in ten Texas (38 percent) say they or someone in their household had problems paying medical bills in the past 12 months (Figure 2). Among Texans who had problems paying medical bills, most say the bills have had a major impact on their family (23 percent of all Texans) while 14 percent say they have had a minor impact and few say they’ve had no real impact (1 percent). 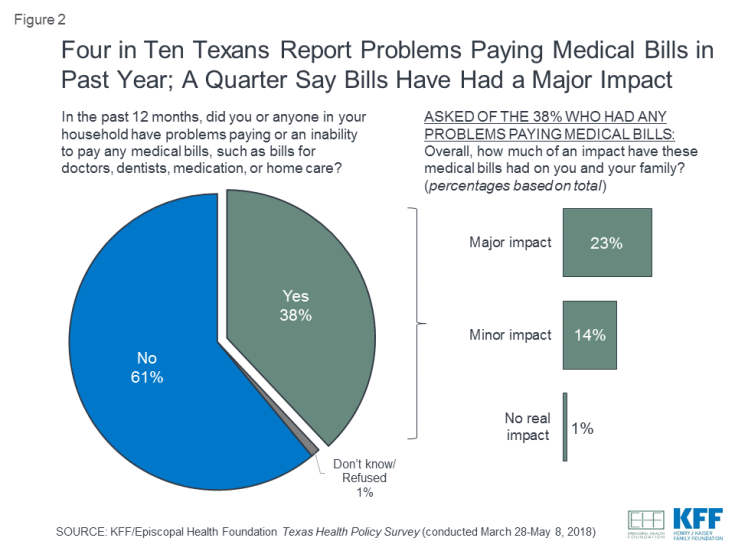 Figure 2: Four in Ten Texans Report Problems Paying Medical Bills in Past Year; A Quarter Say Bills Have Had a Major Impact

Further highlighting Texans’ challenges with health care expenses, a considerable share say they or a family member living in their household have skipped or put off getting some form of care in the past year because of the cost (Figure 3). The most common of these are skipping dental care or checkups (44 percent) and putting off or postponing needed health care (42 percent). About a third report skipping a recommended medical test or treatment (36 percent) or not filling a prescription for a medicine (31 percent). Fewer Texans say they or a family member cut pills in half or skipped doses of medicine (21 percent), or that they had problems getting mental health care (14 percent) in the past year due to cost. In total, six in ten Texans (61 percent) say they or another family member have done at least one of these in the past year because of the cost. 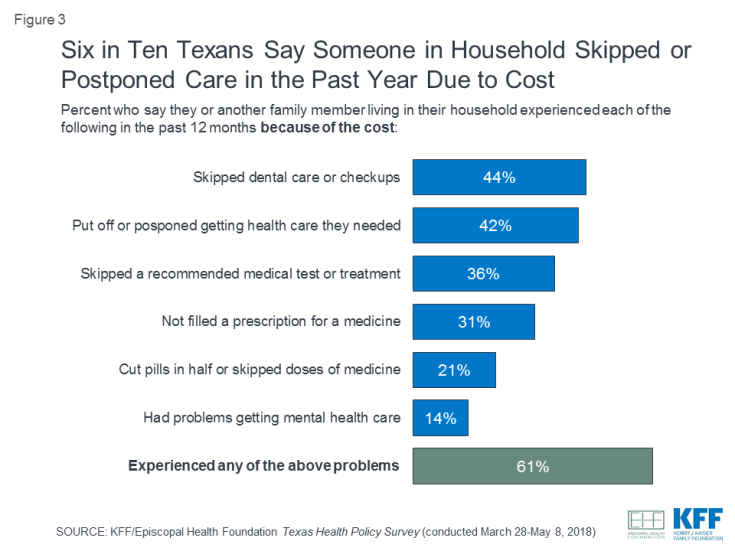 Figure 3: Six in Ten Texans Say Someone in Household Skipped or Postponed Care in the Past Year Due to Cost

The shares of Texans who report problems with health care affordability are higher than the shares of adults nationally who report the same in recent Kaiser Health Tracking Surveys. For example, 38 percent of Texans say they or someone in their household had problems paying medical bills in the past 12 months, compared with 27 percent of adults nationally who reported the same in a KFF poll in March 2018. And in Texas, 61 percent say they or a family member skipped or postponed some type of health care in the past year because of the cost, higher than the 48 percent of adults nationally who reported the same in a December 2016 KFF survey (Figure 4). These differences between Texas and national averages likely reflect the fact that Texas has a somewhat higher share of people living in poverty and a larger share of people without health insurance compared to national averages. 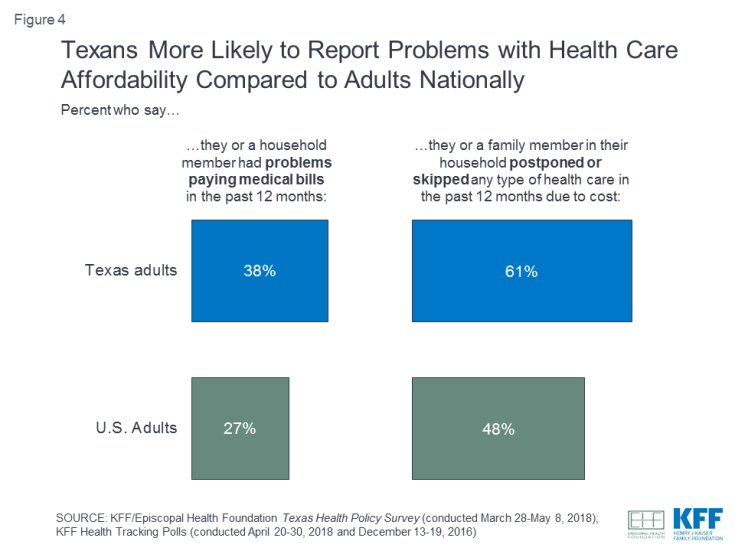 When it comes to problems related to health care costs, certain groups of Texans are more likely than others to report difficulty. In general, those with lower incomes, Hispanic residents, and those in poorer health are more likely to report experiencing these types of problems compared to their higher-income, white, and healthier counterparts (Figure 5).

For example, Texans with self-reported family incomes under 250 percent of the federal poverty level (FPL) are nearly twice as likely as those with higher incomes to say it is difficult for their family to afford health care (71 percent versus 36 percent). They are also much more likely to say they’ve had problems paying medical bills in the past year (48 percent versus 26 percent) and to say someone in their family has put off or postponed some type of medical care in the past year because of the cost (72 percent versus 47 percent).

Similarly, Hispanic residents are more likely to report difficulty affording health care compared to their Black and white counterparts (68 percent, 54 percent, and 47 percent, respectively). Hispanic Texans are also more likely than whites to say they’ve had problems paying medical bills in the past 12 months (42 percent versus 34 percent). However, there is no significant difference by race or ethnicity in the share who report skipping or postponing care because of the cost. Health status makes a difference on all these measures; those who say their own health is only fair or poor are much more likely than those who report being in better health to report difficulty affording health care (77 percent versus 48 percent), problems paying medical bills (56 percent versus 31 percent), and skipping or postponing care due to cost (76 percent versus 55 percent). 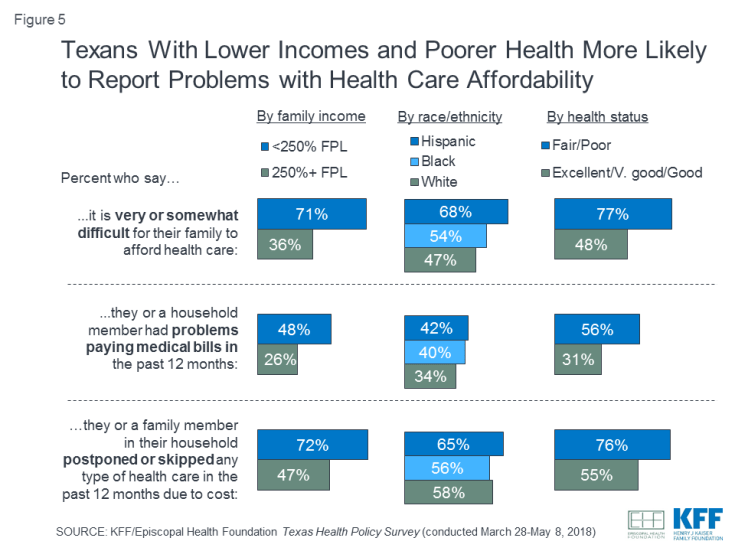 Problems with Health Care Affordability among the Uninsured

Texas is home to the largest number of uninsured adults and has the highest uninsured rate of any U.S. state; 21 percent of adults between the ages of 19-64 in Texas are uninsured, compared to the national average of 12 percent.1 One contributing factor to the uninsured rate is the fact that Texas has not expanded Medicaid under the Affordable Care Act, and Texas has relatively strict adult Medicaid eligibility criteria compared to other states.2

Previous research, both nationally and in Texas, has found that individuals without health insurance are more vulnerable to high medical bills and more likely to report problems with health care affordability compared to their insured counterparts.3 The current survey finds similar results. Large majorities of uninsured Texans ages 18-64 say that health care is difficult for their family to afford (82 percent) and that someone in their household has skipped or postponed some type of medical care in the past year because of the cost (76 percent). About half of the uninsured (49 percent) say someone in their household had problems paying medical bills in the past 12 months (Figure 6).

However, while problems with health care affordability are a major problem for the uninsured, it is notable that insurance doesn’t offer ironclad protection against such problems. Even among Texans ages 18-64 with health insurance, nearly half (47 percent) say health care is difficult for their family to afford, about six in ten (58 percent) report skipping or postponing care due to cost, and about a third (35 percent) say they’ve had problems paying medical bills in the past year. 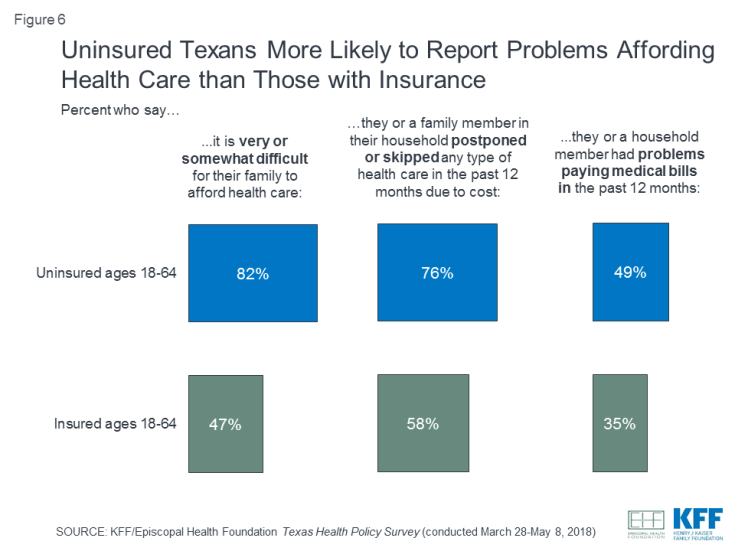 For the uninsured, issues with affordability extend not only to health care services, but also to their ability to obtain health insurance. Among Texans ages 18-64 who are uninsured, the top reason reported for not having insurance is because is too expensive or they cannot afford it (50 percent, Figure 7). Smaller shares cite other explanations such as reasons related to employment (15 percent), citizenship or residency issues (7 percent), or being too busy (6 percent). Just 7 percent of those without coverage say they are uninsured because they don’t want insurance or feel they don’t need it. These findings are consistent with previous research from the Episcopal Health Foundation and Rice University’s Baker Institute among uninsured adults in Texas and national results from previous Kaiser Family Foundation surveys.4 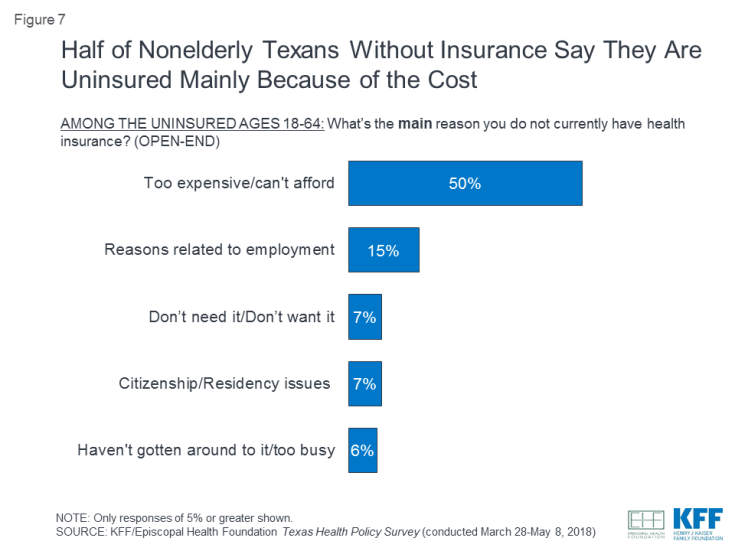 Figure 7: Half of Nonelderly Texans Without Insurance Say They Are Uninsured Mainly Because of the Cost 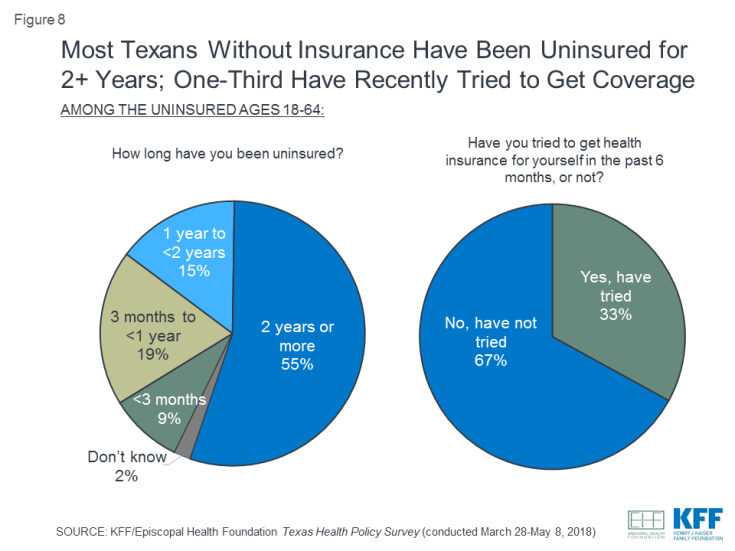 Figure 8: Most Texans Without Insurance Have Been Uninsured for 2+ Years; One-Third Have Recently Tried to Get Coverage

Beyond the cost of health care, access to providers can be a barrier to receiving needed medical care for some individuals. About a quarter of Texans say that there is either no place they usually go when they are sick or need advice about their health (21 percent), or the place they usually go to is a hospital emergency room (5 percent). About four in ten Texans (44 percent) say they usually go to a doctor’s office, while one in five say they visit a clinic or health center, and smaller shares report relying on another place of care such as an urgent care center or hospital outpatient department (Figure 9). 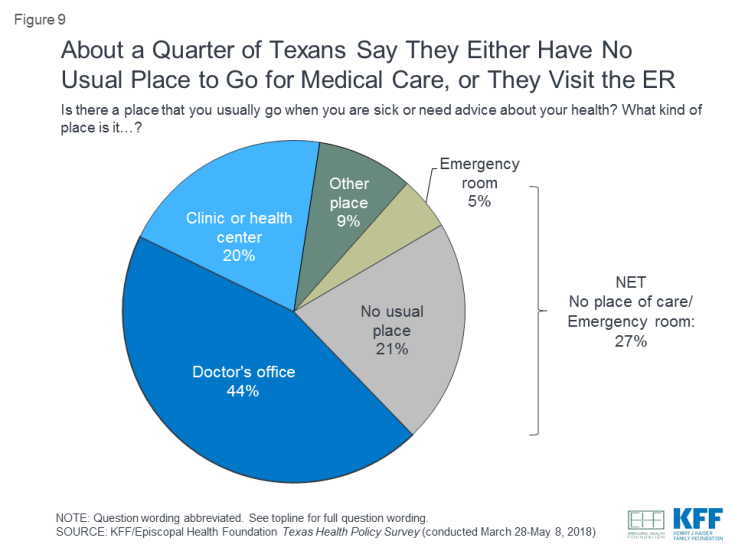 Figure 9: About a Quarter of Texans Say They Either Have No Usual Place to Go for Medical Care, or They Visit the ER

There are differences by race/ethnicity, income, and insurance status in the places where Texans report receiving their medical care. Lower-income adults, those without health insurance, and Black and Hispanic residents are more likely than their higher-income, insured, and white counterparts to say they don’t have a usual source of care or they rely on hospital emergency rooms. Hispanic adults and those with lower incomes are also more likely than other groups to report visiting a clinic or health center for their care (Table 1).

Even among Texans who have a place they usually go to when sick or in need of advice, difficulty traveling to this place can be a barrier for some. Overall, the large majority of Texans with a usual place for medical care say it is either “very easy” (61 percent) or “somewhat easy” (23 percent) to travel there, but 16 percent say it is “somewhat” (13 percent) or “very difficult” (3 percent). More vulnerable individuals, such as Texans with lower incomes, Medicaid enrollees, seniors, and those in fair or poor health are particularly likely to report difficulty traveling to the place they usually receive care. For example, among those with a usual place to go for medical care, Texans with self-reported incomes under 250 percent of the federal poverty level are three times as likely as higher-income residents to say it is difficult to travel to that place (25 percent versus 7 percent). And among Texans ages 18-64 with Medicaid coverage and those who report being in fair or poor health, roughly three in ten say it is difficult to travel to their place of care (Figure 10). 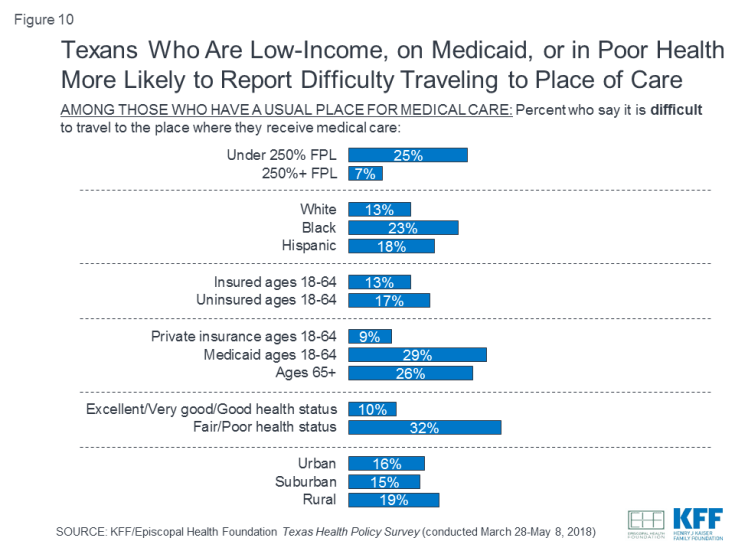 Figure 10: Texans Who Are Low-Income, on Medicaid, or in Poor Health More Likely to Report Difficulty Traveling to Place of Care