In 2015, just 1 in 10 (11%) nonelderly people with HIV were uninsured, on par with the share in the general population that year (13%).1,2 In addition, while not directly comparable to the earlier MMP sample, this appears to have continued a downward trend that began in 2014, after ACA implementation. In 2014,14% of nonelderly people receiving HIV care were uninsured, down from 18% pre-ACA, in 2012.3

40% of people with #HIV are enrolled in Medicaid — the single largest source of insurance coverage for people with HIV in the U.S. States that expanded their Medicaid programs under the ACA have lower uninsured rates among people with HIV. 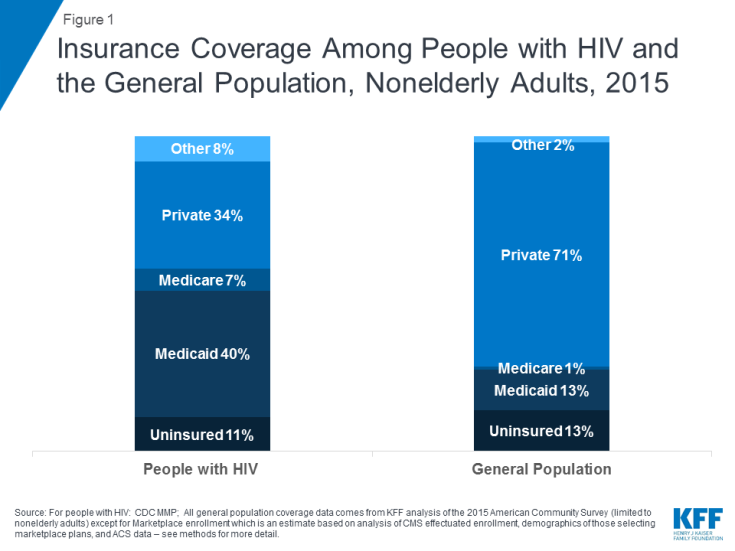 Figure 1: Insurance Coverage Among People with HIV and the General Population, Nonelderly Adults, 2015

In our earlier analysis, we found that the main driver of coverage gains under the ACA among people in HIV care was Medicaid expansion.5 Similarly, in 2015, this continues to hold true. Among the states sampled, uninsurance rates were significantly lower in states that had expanded their Medicaid programs compared to non-expansion states (5% v 19%) and rates of Medicaid coverage were significantly higher (48% v 29%). 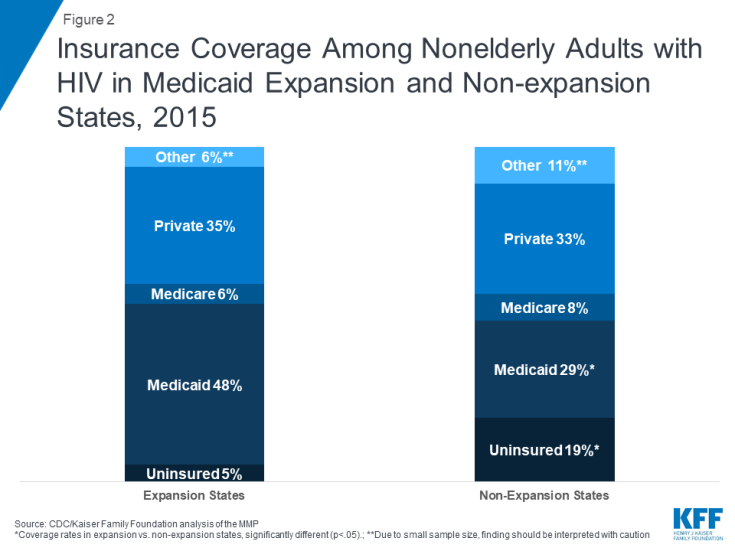 The nation’s Ryan White HIV/AIDS Program provides outpatient HIV care, treatment, and support services to people with HIV who are underinsured and uninsured. The program also assists with purchasing insurance on behalf of clients with access to coverage. Overall, in 2015, about half (46%) of non-elderly people with HIV received assistance from Ryan White. Ryan White plays an especially important role for the uninsured, 82% of whom received assistance through the program (e.g. direct medical care, medications, insurance purchasing, and/or support services). Ryan White also plays a meaningful role for those with insurance coverage, supporting 41% in 2015 by addressing gaps in coverage and assisting with insurance and out-of-pocket drug and medical costs related to HIV care and treatment. A much higher percentage of those with marketplace coverage relied on Ryan White (60%) than those with employer sponsored insurance (31%), potentially reflecting the role of Ryan White in helping clients purchase insurance, especially among a group likely to have lower incomes relative to those with employer coverage. 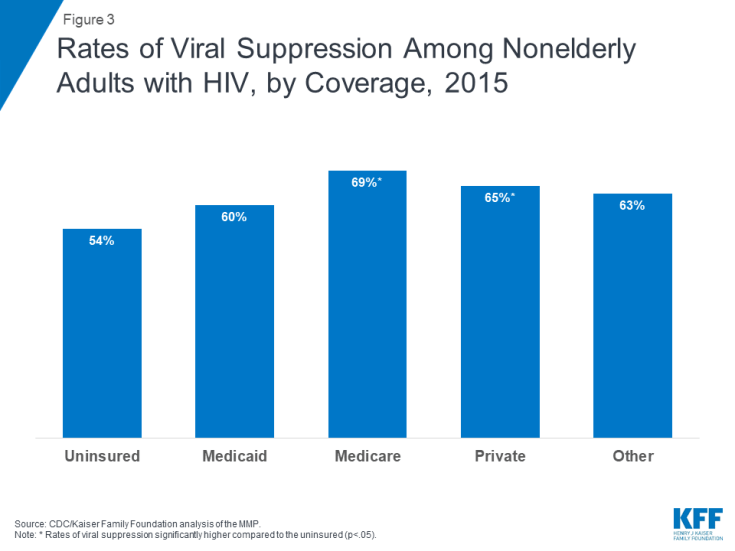 Figure 3: Rates of Viral Suppression Among Nonelderly Adults with HIV, by Coverage, 2015

The ACA has played a significant role in increasing insurance coverage for people with HIV, particularly through Medicaid in those states that expanded coverage. As of 2015, the uninsurance rate among nonelderly people with HIV was similar to that of the public at large. We also find that the Ryan White HIV/AIDS Program remains a critical source of care, treatment, and support for people with HIV, especially for those who are uninsured but also for a substantial share of those who do have coverage. Both insurance coverage and Ryan White were associated with higher rates of sustained viral suppression, a crucial indicator of optimizing the individual and public health benefits associated with antiretroviral treatment.

The future of the U.S. healthcare landscape continues to be a source of significant debate, with some parties seeking to repeal the ACA or certain aspects of the law and others aiming to move towards even more expansive coverage options. Either approach would stand to significantly impact coverage, and likely care outcomes, for people with HIV, as well as the success of the new Ending the HIV Epidemic Initiative. Looking ahead, it will be important to continue to monitor access to care and coverage among people with HIV, particularly given the importance of engagement in care and treatment in optimizing the individual and public health benefits of treatment.