What Have Pandemic-Related Job Losses Meant for Health Coverage?

The coronavirus pandemic has caused a sharp increase in unemployment across the country. The unemployment rate peaked at 14.7% in April and remained above 10% until very recently. In the United States, health insurance and employment often go hand-in-hand: With the majority of working age adults receiving coverage through an employer-sponsored plan, people who lose work due to the pandemic also risk losing their health coverage when they might need it most. An earlier KFF brief, based on unemployment figures through the start of May, estimated that roughly 27 million people were at risk of losing their job-based coverage when they or family members lost their jobs. However, at the time, it was unclear what decisions employers were making about whether to keep their workers covered (e.g. by keeping furloughed workers on health plans or by helping employees pay for COBRA continuation coverage).

Data has now become available that provide a glimpse into what has happened to enrollment among employer plans since the start of the pandemic. Surprisingly, in comparison to the nearly 9% drop in employment from March to June, early data suggests that employers had kept coverage rates remarkably steady, at least through mid-summer. We examined data that insurance companies submit to the National Association of Insurance Commissioners, compiled by Mark Farrah Associates, finding that enrollment in the fully-insured group market dropped by just 1.3% from the end of March through the end of June (Figure 1). 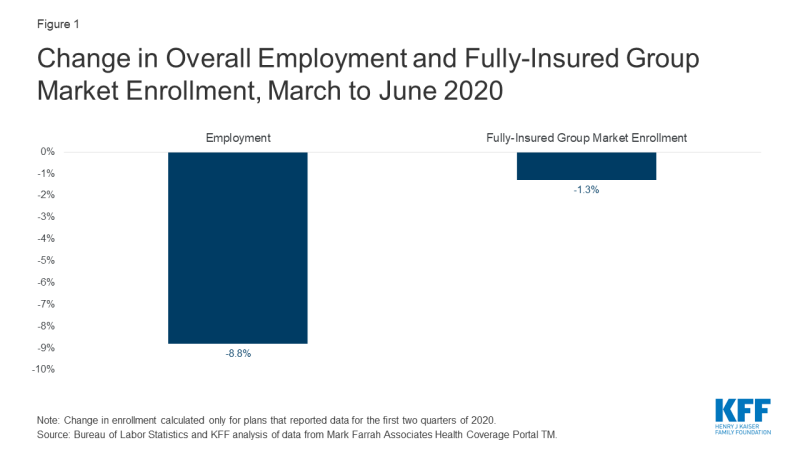 Part of the explanation for this apparent discrepancy could be that many of the people who lost employment were never enrolled in employer-based coverage in the first place, as lower-wage workers are less likely to be covered by their employer’s plan. Even so, there are some reasons this 1.3% drop may even overstate employer coverage losses during the early months of the pandemic. For years, the fully-insured group market has gradually shrunk: While the 1.3% is the largest drop in recent years and is likely largely driven by job losses, over the last several years we have seen enrollment drops from the first to second quarter of the year ranging from 0.3% to 0.7% in the fully-insured market. Also, though we do not have data on self-funded plan enrollment rates, there are reasons to suspect the types of companies that self-insure (which tend to be larger companies) were better able to weather the early financial hits and might have had fewer job losses or might have been in a better position to let their employees retain their health benefits.

The relatively low coverage losses through the end of June are consistent with data showing growth in Medicaid enrollment through May and relatively flat Marketplace enrollment, not yet indicative of big losses in employer coverage. If there were large coverage losses in the employer market, we previously estimated that 85% would have been eligible to move to Medicaid or the ACA Marketplaces.

From discussions with employers and benefit consultants, we have heard that some employers elected to keep furloughed workers enrolled in health coverage. As the pandemic continues it’s unclear how long this can continue. Data from BLS show that temporarily laid-off workers made up the vast majority of the unemployed in the spring and early summer. However, temporary lay-offs have decreased, while the number of permanent job losses has increased through the summer. If this trend continues, we could see larger coverage losses later this year.