Employer- and union-sponsored retiree health benefits have served as an important source of supplemental coverage for people on Medicare.  Retiree health plans help fill the gaps in Medicare’s benefit design, often cover some or all of Medicare’s cost-sharing requirements and deductibles, and include a cap on out-of-pocket spending – a benefit that is required to be provided by all Medicare Advantage plans, but not covered under traditional Medicare, and of great value to retirees needing costly medical care.  For retirees, employer-sponsored supplemental coverage limits the costs they would otherwise incur for their medical care.

The Kaiser Family Foundation has been tracking trends in employer-sponsored health coverage, and has documented a significant drop in the share of large employers (200+ workers) offering retiree health coverage, from 66 percent in 1988 to 23 percent in 2015.  Firms that continue to offer retiree health benefits have adopted various strategies to limit their liability for these costs, including: hard caps on their financial liability, a shift from a defined benefit to a defined contribution approach, and increases in premiums and cost-sharing requirements paid by retirees and  their spouses.  In recent years, some employers have elected to offer retiree benefits through contracts with Medicare Advantage plans and private health insurance exchanges. 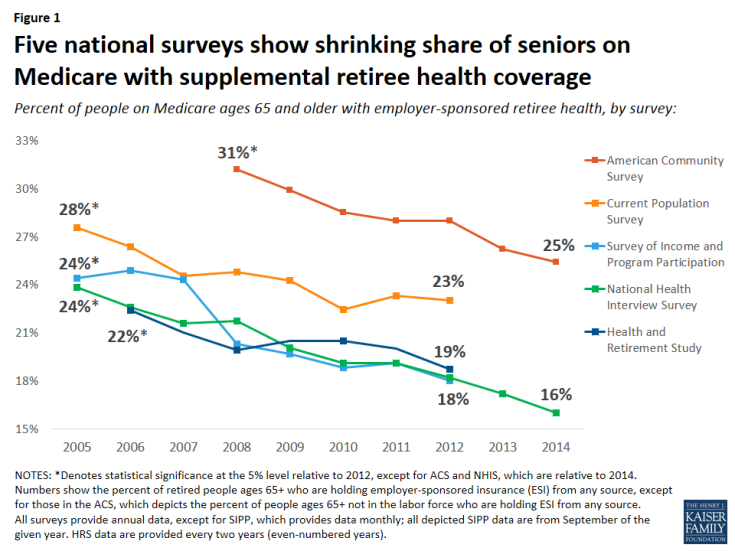 In this data note, we draw upon five large national surveys to assess how the termination of retiree health coverage has affected coverage among seniors on Medicare (Figure 1).  These five surveys produce different estimates of retiree health coverage – differences that may be due to variations in sample size, question wording, skip patterns and sample population (Table 1). 1, 2

Together, however, these five national surveys paint a clear picture:  the share of seniors on Medicare with employer-sponsored retiree health coverage is shrinking. For example, in the survey providing the highest estimates of retiree coverage among people ages 65 and older on Medicare—the American Community Survey—the share declines from 31% in 2008 to 25% in 2014.  In the National Health Interview Survey, the share declines from 24% in 2005 to 16% in 2014. 3

The drop in retiree health coverage has important implications for retiring boomers who are approaching their Medicare years with a different set of insurance needs and choices than their parents’ generation.  A growing number of boomers are aging on to Medicare without the additional financial protection of an employer-subsidized retiree health plan.  Some will shift on to traditional Medicare, without supplemental coverage, and face multiple deductibles and cost-sharing requirements when they seek medical care, unless they forego care due to costs.  The decline in retiree coverage could lead to an increase in the demand for individually-purchased Medicare supplemental (Medigap) insurance policies and contribute to the rise in Medicare Advantage enrollment, particularly among those who are willing to trade more limited provider networks for the financial protection that comes with a limit on out-of-pocket spending.

Employer-sponsored retiree health coverage once played a key role in supplementing Medicare.  Any way you slice it, this coverage is eroding.

Tricia Neuman is with the Kaiser Family Foundation, and Anthony Damico is an independent consultant.