Section 2: The Public’s Perceptions of Loneliness and Social Isolation

Awareness and Views of the Issue

Across the U.S., the U.K., and Japan, majorities say they have heard “a lot” or “some” about the issue of loneliness and social isolation in their country. Not surprisingly given recent efforts by the U.K. government to address the issue, visibility is highest in the U.K. with two-thirds (67 percent) saying they’ve heard at least something about it, followed by 58 percent in Japan and 51 percent in the U.S. In the U.K., where a new minister for loneliness was appointed earlier this year, three in ten say they have heard or read “a lot” or “some” about recent efforts by the British government to address loneliness in the U.K. Another third say they’ve heard or read “only a little” and another third say they’ve heard “nothing at all.” 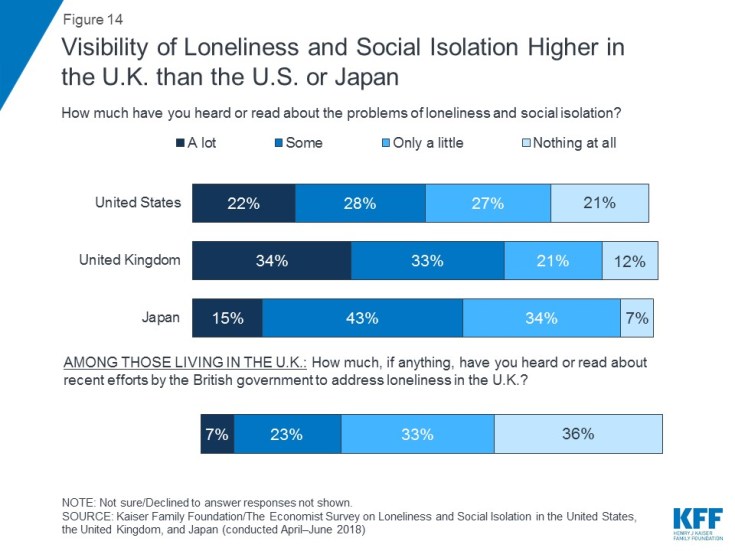 Figure 14: Visibility of Loneliness and Social Isolation Higher in the U.K. than the U.S. or Japan 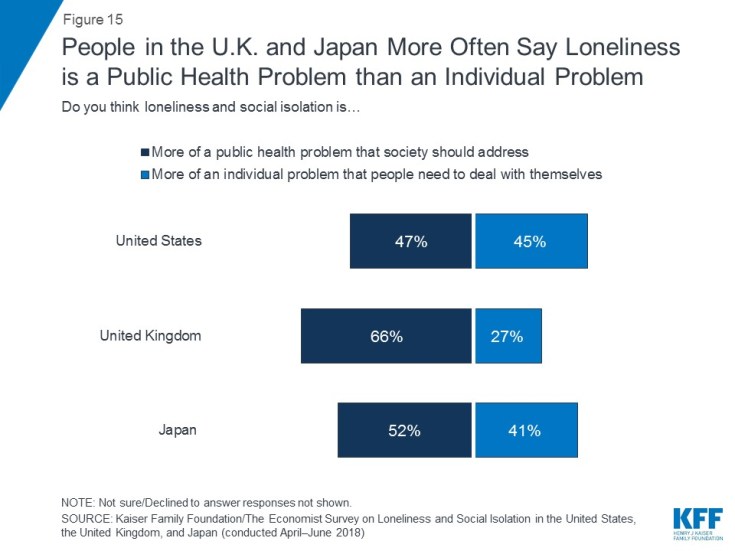 Figure 15: People in the U.K. and Japan More Often Say Loneliness is a Public Health Problem than an Individual Problem

Japan has unique terms for two specific conditions related to loneliness. One is Hikikomori, or the acute social withdrawal of adolescents and young adults, and the other is Kodokishi, which refers to the concept of dying alone. In Japan, eight in ten or more say that these are very or somewhat serious problems. Those reporting loneliness in Japan are more likely than others to say Hikikomori and Kodokishi are “very” serious problems (43 percent vs. 31 percent and 60 percent vs. 40 percent, respectively). 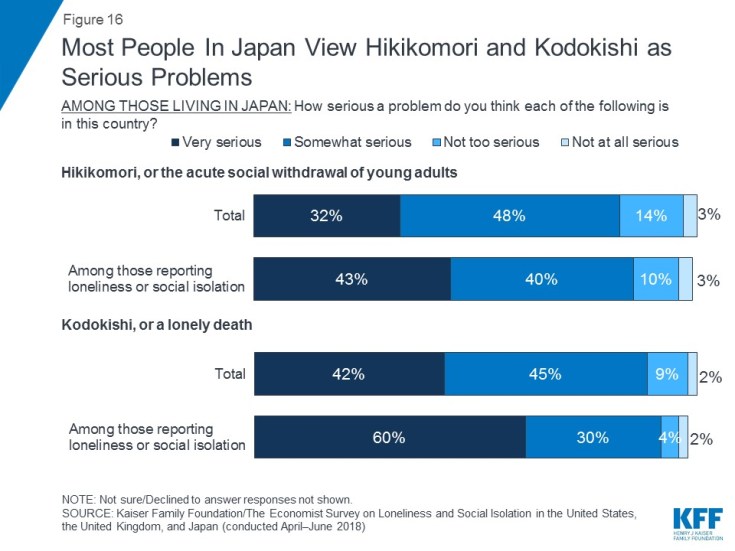 Figure 16: Most People in Japan View Hikikomori and Kodokishi as Serious Problems 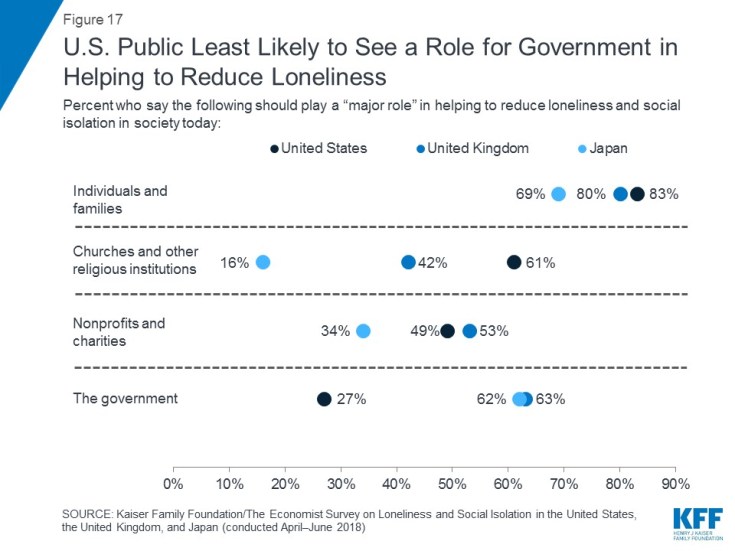 Figure 17: U.S. Public Least Likely to See a Role for Government in Helping to Reduce Loneliness

Perceptions of Reasons for Loneliness 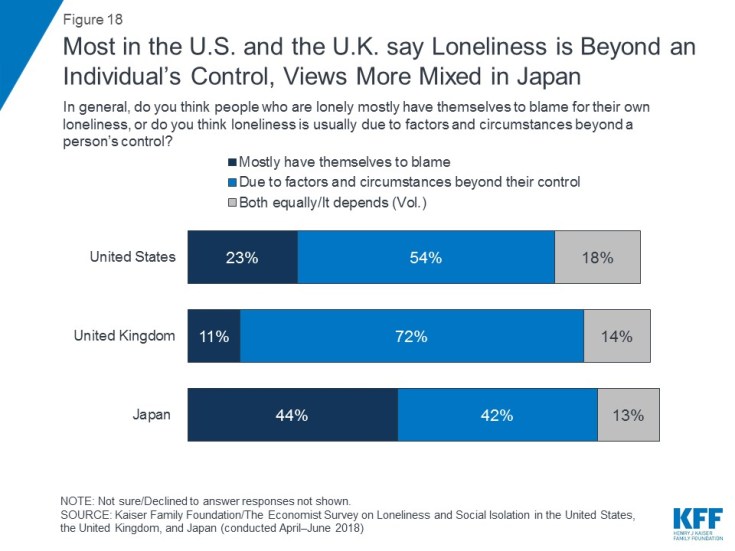 Figure 18: Most in the U.S. and the U.K. say Loneliness is Beyond an Individual’s Control, Views More Mixed in Japan

There are a number of different societal factors that may play a role in loneliness and social isolation and views of these potential reasons for loneliness differ across the U.S., U.K. and Japan. In one place of agreement, majorities across countries say that long-term unemployment is a major reason why people are lonely or socially isolated in their country. Much of the public in the U.S. and U.K. point to increased use of technology and adults playing less of a role in helping aging parents as major reasons, whereas fewer in Japan say the same. In addition, residents of the U.K. are more likely than those in the U.S. to say people moving away from where they grew up is a major reason for loneliness. Residents of the U.K. are also more likely than people in the U.S. or Japan to say cuts in government social programs is a major reason for loneliness. Views are similar regardless of whether or not someone reports personally experiencing loneliness or social isolation themselves. 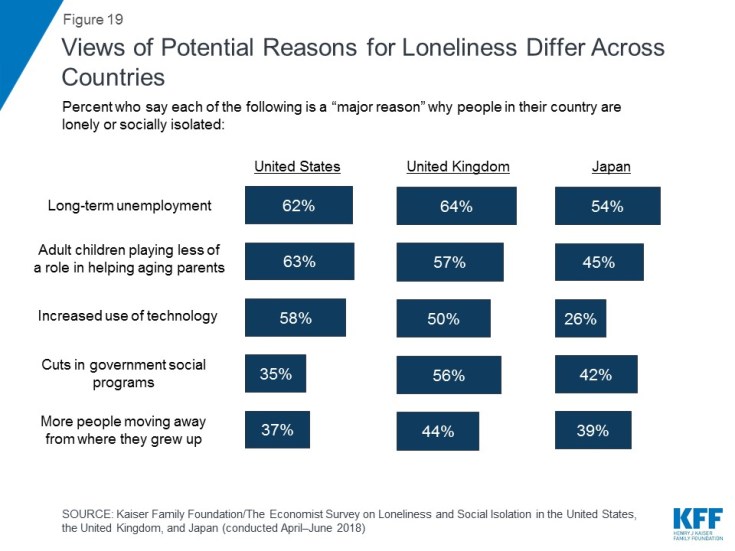 Figure 19: Views of Potential Reasons for Loneliness Differ Across Countries 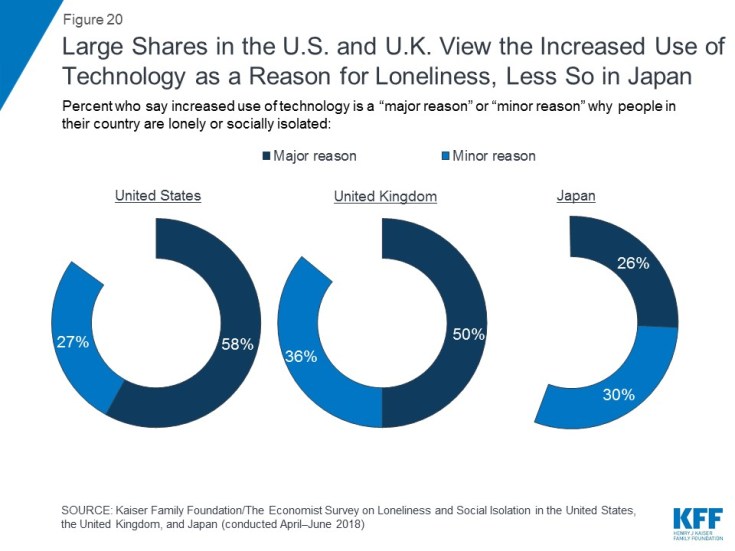 Figure 20: Large Shares in the U.S. and U.K. View the Increased Use of Technology as a Reason for Loneliness, Less So in Japan 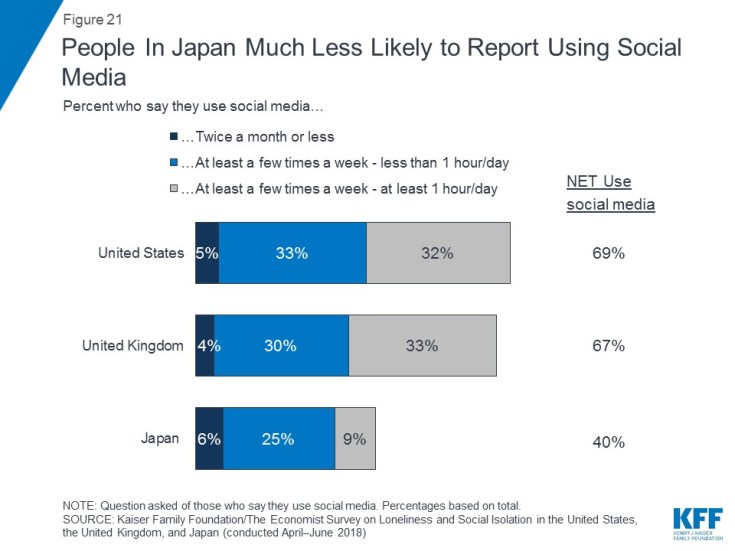 While most Americans view increased technology use as a major reason why people feel lonely/isolated, those who always or often feel that way are divided on social media’s impact

For the most part, people who report being socially isolated or lonely in each country are not more likely than their peers to report using social media. However, those experiencing loneliness in the U.S. and Japan are more likely than others to say they use social media for 2 hours or more per day (22 percent vs. 12 percent in the U.S. and 11 percent vs. 4 percent in Japan). 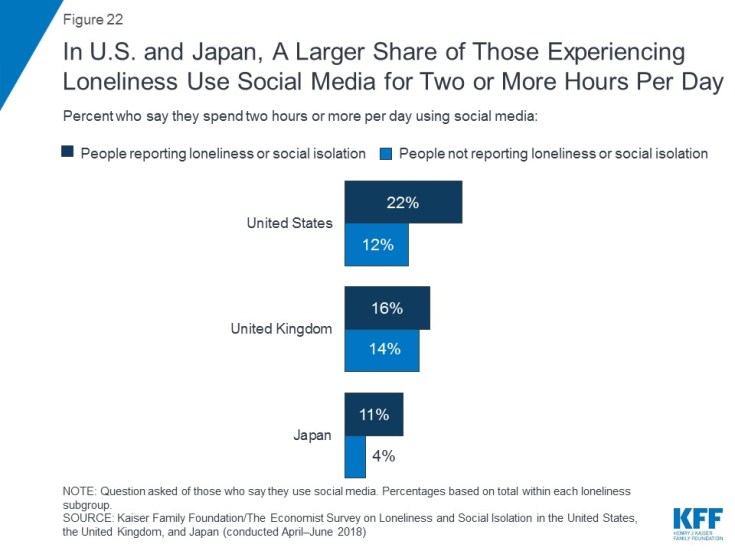 Figure 22: In U.S. and Japan, A Larger Share of Those Experiencing Loneliness Use Social Media for Two or More Hours Per Day

In each country, more of the public overall says that they think their ability to connect with others in a meaningful way is strengthened by social media than say it is weakened. However, those who are experiencing loneliness are more divided. 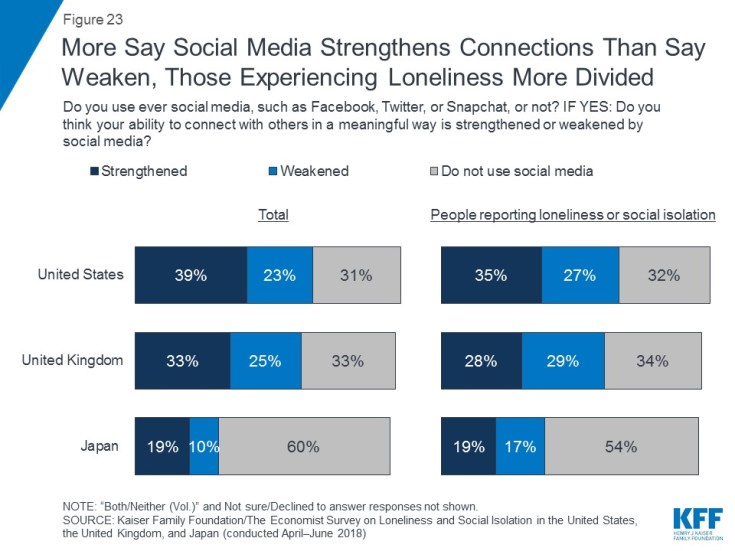 On the question of whether one’s personal feelings of loneliness are made better or worse by social media, roughly similar shares of those experiencing loneliness in the U.S., U.K., and Japan say better or say worse. 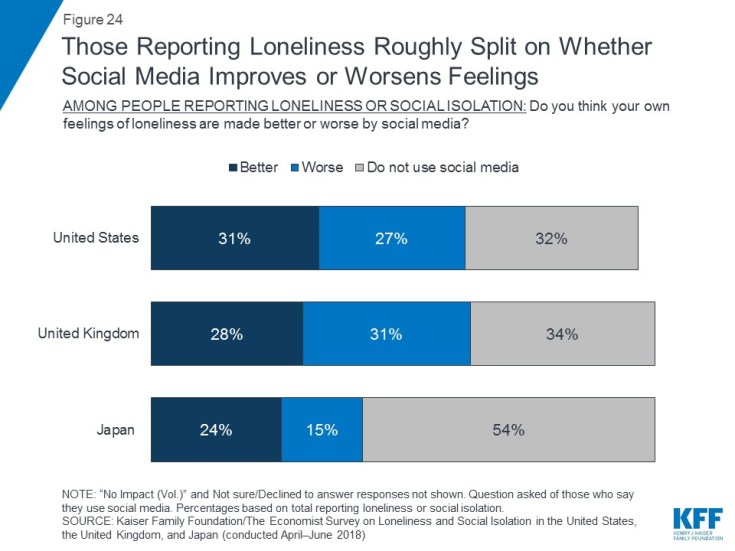 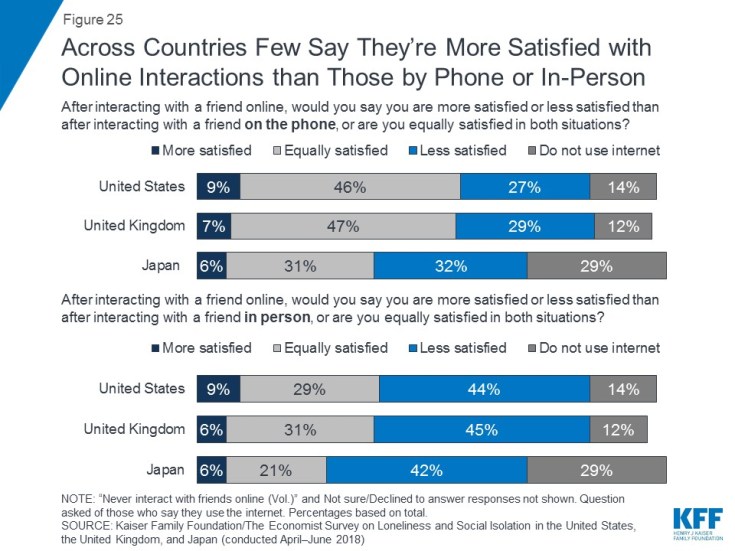 Figure 25: Across Countries Few Say They’re More Satisfied with Online Interactions than Those by Phone or In-Person

More broadly, across countries, more say technology in general has made it harder to spend time with friends and family in person than say it has made it easier. A third or more say it hasn’t made a difference. People experiencing loneliness or social isolation in the U.K. or Japan are more likely than others to say technology has made it harder to spend time with family and friends. In the U.S., shares are similar for those who are experiencing loneliness and those who aren’t. 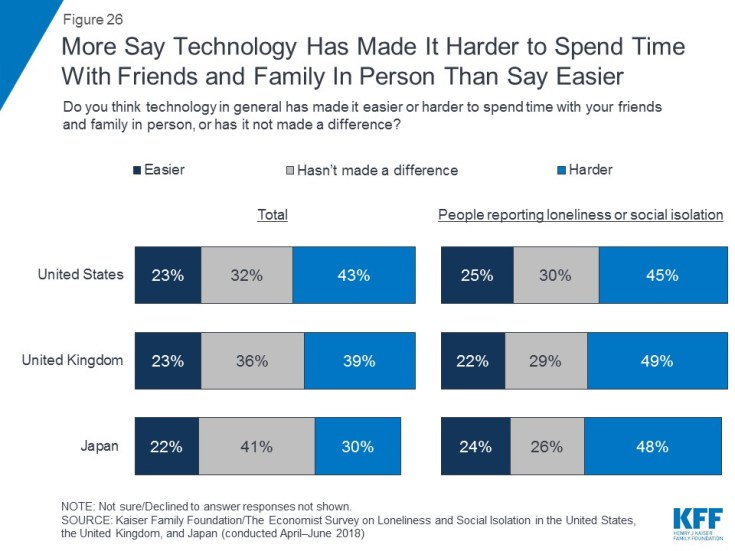 Figure 26: More Say Technology Has Made It Harder to Spend Time with Friends and Family In Person Than Say Easier

Section 1: Characteristics and Experiences of Those Who Report Often Feeling Lonely or Socially Isolated Methodology