The elimination of the individual mandate penalty raised concerns that healthy enrollees would leave the individual insurance market, insurers would in turn raise premiums significantly, and the market would enter a “death spiral”. The impacts of the mandate penalty repeal are particularly relevant to a pending federal court case, Texas v. U.S., in which plaintiffs seek to strike down the entire Affordable Care Act (ACA) based on the argument that the mandate is unconstitutional without a penalty and is not severable from the rest of the ACA.

Going into 2019, insurers reported that the reduction of the penalty to $0 drove premiums up by about 5 percentage points. Nonetheless, premiums were largely steady in 2019, on average, in part because insurers had priced too high in 2018. Despite concerns about the continuing impact of the loss of the mandate penalty, the individual market has remained fairly stable through 2019. Enrollment among those not eligible for subsidies declined by 10% in early 2019, but individual market enrollment overall appears to be stabilizing, with total market enrollment falling by just 5%.

In this analysis, we look at financial data through the third quarter of 2019 to examine how the individual insurance market has responded to these recent changes. We use financial data reported by insurance companies to the National Association of Insurance Commissioners and compiled by Mark Farrah Associates to look at the average premiums, claims, medical loss ratios, and gross margins from third quarter 2011 through third quarter 2019 in the individual insurance market. These figures include coverage purchased through the ACA’s exchange marketplaces and ACA-compliant plans purchased directly from insurers outside the marketplaces (which are part of the same risk pool), as well as individual plans originally purchased before the ACA went into effect. These new data from the first nine months of 2019 suggest that insurers in the individual market remain profitable, and that the risk pool is not significantly sicker than it was while the individual mandate was still in effect.

As we found in our previous analysis, insurer financial performance as measured by loss ratios (the share of health premiums paid out as claims) worsened in the earliest years of the ACA marketplaces, but began to improve more recently. This is to be expected, as the market had just undergone significant regulatory changes in 2014 and insurers had very little information to work with in setting their premiums.

The chart below shows simple loss ratios, which differ from the formula used in the ACA’s medical loss ratio (MLR) provision.1 Loss ratios began to decline in 2016, suggesting improved financial performance. In 2017, following relatively large premium increases, individual market insurers saw significant improvement in loss ratios, a sign that individual market insurers on average were beginning to better match premium revenues to claims costs. Loss ratios continued to fall in 2018, suggesting that insurers were able to build in the loss of cost-sharing subsidy payments when setting premiums and some insurers over-corrected. With such low loss ratios, insurers generally could not justify premium hikes for 2019, and loss ratios for the third quarter of 2019 rose slightly to 75%. 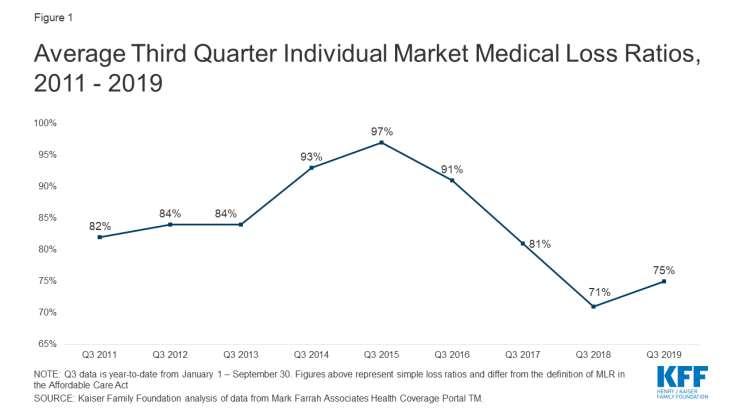 Another way to understand individual market financial performance is to examine average gross margins per member per month, or the average amount by which premium income exceeds claims costs per enrollee in a given month. Gross margins are an indicator of performance, but positive margins do not necessarily translate into profitability since they do not account for administrative expenses. 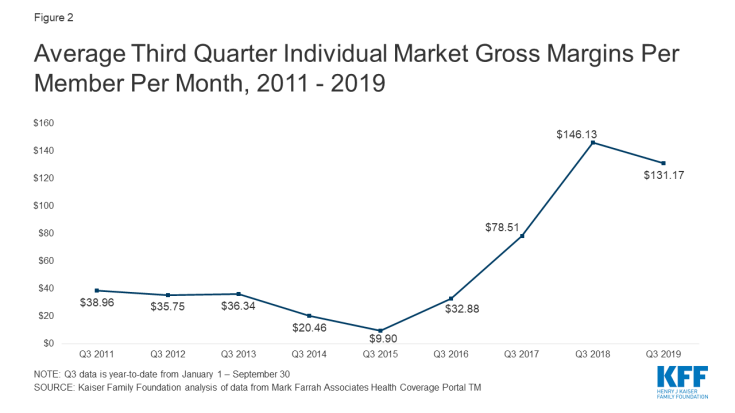 Gross margins show a similar pattern to loss ratios. Insurer financial performance declined slightly from the third quarter of 2018 to 2019, but margins were still higher than all other previous years through 2017. Third quarter data tend to indicate the general direction of the annual trend and, while annual 2019 margins are unlikely to end as high as they are in the third quarter, these data suggest that insurers in this market remain on average financially healthy. 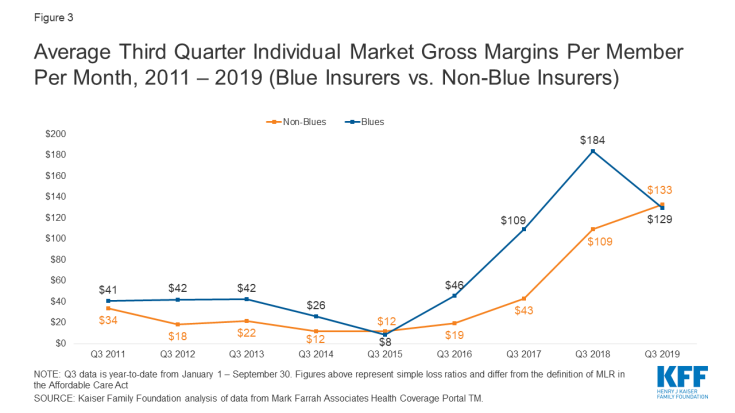 Premiums per enrollee rose slightly in 2019 while claims costs continued to grow at a similar pace to previous years. On average, premiums per enrollee rose 2% from late 2018 to 2019, while per person claims grew 7%. Claims growth is generally a function of changes in both prices and utilization of health services, and can also reflect the mix of enrollees (e.g., the share who are healthy versus sick). 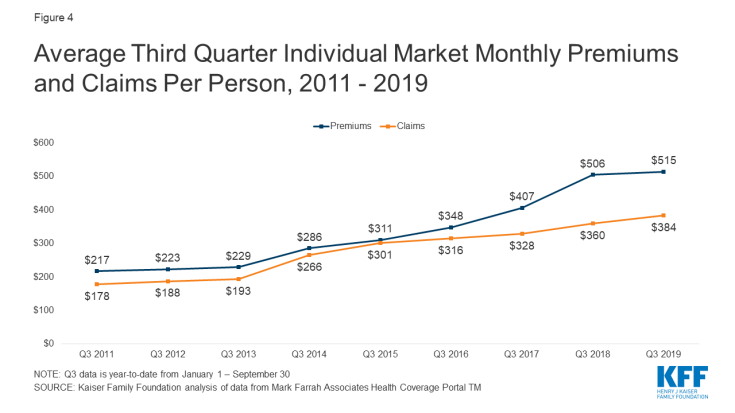 One concern about the effective repeal of the individual mandate was whether healthy enrollees would drop out of the market in large numbers in 2019, leaving the market sicker with higher average claims costs. Individual market enrollment did fall by 5% between the first quarter of 2018 and 2019, driven by declining enrollment among those who do not qualify for premium subsidies. However, the relatively modest growth in claims costs during the first nine months of 2019 – similar to previous years – suggests that these policy changes and enrollment declines did not cause the individual market to become significantly less healthy on average. In fact, the average number of days individual market enrollees spent in a hospital in the first nine months of 2019 was slightly lower than inpatient days in the previous four years.2 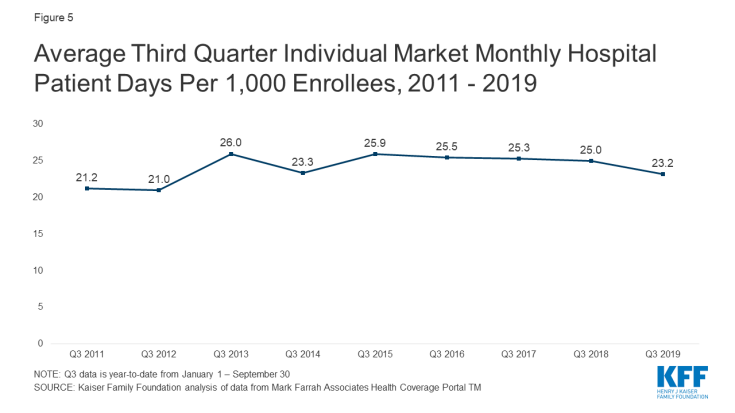 Taken together, these data suggest that the individual market risk pool is relatively stable, though sicker on average than the pre-ACA market, which is to be expected since people with pre-existing conditions have guaranteed access to coverage under the ACA.

While markets in some parts of the country, especially in rural areas, remain more fragile with fewer insurers and higher premiums than in urban areas, the individual market on average appears stable. Some insurers exited the market in previous years, but others have been successful and expanded their footprints, as would be expected in a competitive marketplace. Marketplace premiums are decreasing by 2-3% on average in 2020, further indicating that insurers expect the individual market to remain stable. Marketplace enrollment for 2020 is generally steady.

With a continuing legal battle threatening the exchange markets and the ACA as a whole, significant uncertainties remain. While insurers are now locked in to 2020 premiums for ACA-compliant plans, it remains to be seen how this continued uncertainty around the future of the ACA may affect premiums and plan participation in 2021 or beyond.