Medicaid, the nation’s public health insurance program for people with low income, covers 74 million Americans today, including millions of low-income adults. The Affordable Care Act (ACA) expanded Medicaid to nonelderly adults with income up to 138% of the federal poverty level (FPL), and, in the 32 states (including DC) that implemented the expansion, more than 11 million adults have gained Medicaid as a result. Chronic illness is prevalent in the adult Medicaid population. Preventive care, including immunizations and regular screenings that permit early detection and treatment of chronic conditions, improves the prospects for better health outcomes. This Data Note focuses on Medicaid’s role in providing access to preventive care for low-income adults.

Why is preventive care for adult Medicaid enrollees important?

Adults in Medicaid have high rates of preventable and controllable conditions. Nearly one-third (30%) of non-elderly adult Medicaid beneficiaries report that they are in only fair or poor health – roughly double the percentage of low-income privately insured and uninsured adults who report fair or poor  health (Figure 1). Medicaid adults also have significantly higher rates of chronic conditions and risky health behaviors that may be amenable to preventive care. One in 10 adult enrollees has a diagnosed mental illness; 7 in 10 are overweight or obese, and almost 1 in 3 smoke tobacco. 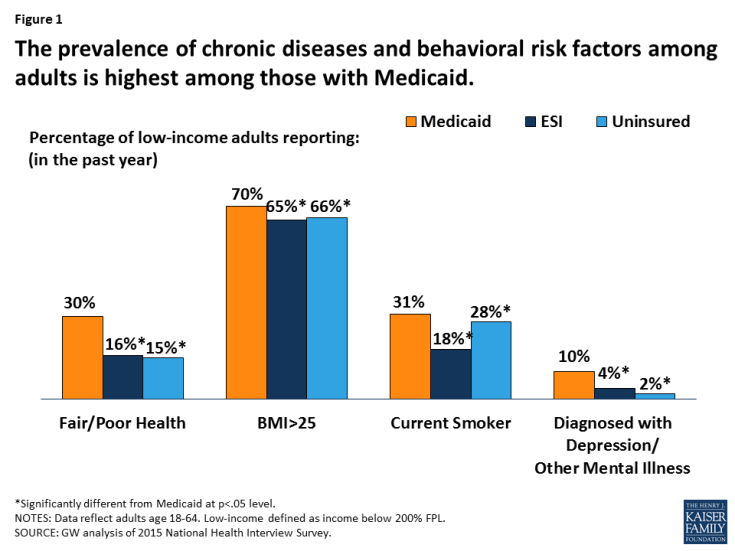 Figure 1: The prevalence of chronic diseases and behavioral risk factors among adults is highest among those with Medicaid.

Preventive care can reduce disease and avoidable use of high-cost services. Increased access to screening for diabetes, cancer, depression, and o ther chronic conditions, and counseling to address behavioral risk factors, have the potential to reduce disease and prevent exacerbations of conditions that can be medically managed. Improved health may reduce the use of avoidable hospital and other high-cost care, and reduce Medicaid spending. For example, smoking can cause heart disease and other chronic illnesses that one study estimated may be responsible for more than $75 billion in Medicaid costs. Medicaid coverage of smoking cessation services, including quit lines and medications, has the potential to mitigate both the health and cost impacts of smoking. Obesity, a major driver of preventable chronic illness and health care costs, affects about two-thirds of low-income adults. Findings from one study indicate that severe obesity in adults cost state Medicaid programs almost $8 billion in 2013, suggesting that “effective treatment for severe obesity should be part of each state’s strategy to mitigate rising obesity-related costs.”

What preventive services does Medicaid cover for adults?

Most state Medicaid programs covered many adult preventive services before the ACA took effect. A 2014 study found that most state Medicaid programs covered all EHB-required adult preventive services in 2013, although some had cost-sharing charges. At the same time, another study found that documented state coverage policies in effect prior to the ACA did not always correspond precisely with the EHB requirements for preventive care, indicating there was room for improvement. Eight states – California, Minnesota, Nevada, New Hampshire, New Jersey, New York, Oklahoma, and West Virginia – have opted to cover the recommended adult preventive services without cost-sharing for all Medicaid adults. Seven of these states implemented the Medicaid expansion to low-income adults.

How do adults with Medicaid fare in accessing preventive care?

Nearly all adults with Medicaid have a usual place where they get routine or preventive care. One measure of Medicaid’s effectiveness is the extent to which beneficiaries have a usual source of care, which opens the door to the health care system, including preventive care. Over 90% of adults with Medicaid report having a usual place of care – the same as the percentage of low-income privately insured adults with a usual place, and significantly exceeding the share of low-income uninsured adults who do (Figure 2). Adults with Medicaid are also significantly more likely than adults in the other two groups to have had a primary care visit and a mental health visit in the past year. Research shows that people with a usual source of care have better outcomes and that having a primary care physician as the usual source of care increases the likelihood of receiving appropriate care. 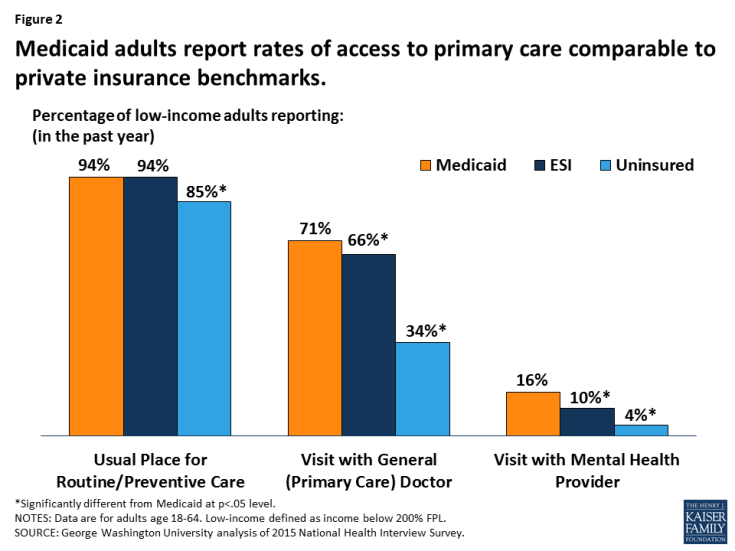 Medicaid is as effective as private insurance at connecting low-income adults with recommended clinical preventive services. The percentage of Medicaid adults who report receiving recommended clinical preventive services is at least as high as the percentage of low-income privately insured adults receiving these services (Figure 3). In fact, Medicaid adults are significantly more likely than the privately insured to report a blood pressure check (84% versus 79%) and a cholesterol check (60% versus 56%). Medicaid adults do significantly better than the uninsured on every measure of preventive care. Notably, the share of low-income adults who report receiving recommended cancer screenings is no more than about half, pointing to a need for increased investment and effort to improve access to these services as well as public education about their importance. 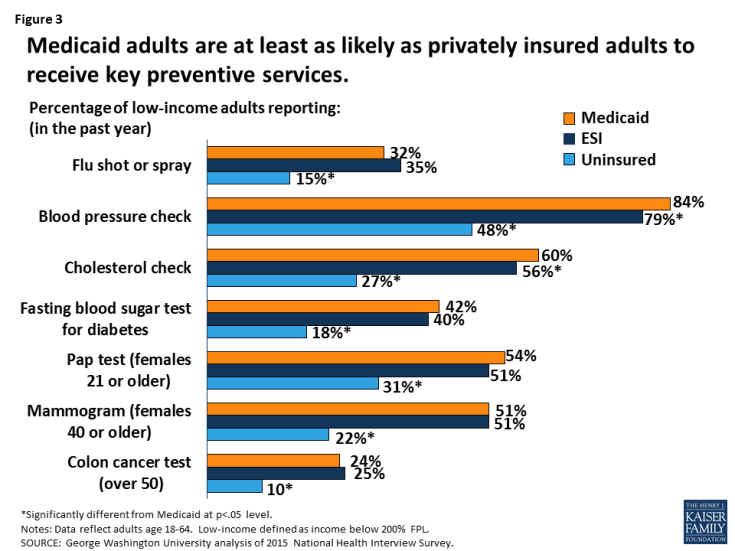 The major health risks and costs posed by overweight/obesity and smoking point to a need for more focus on patient counseling, including in Medicaid. As mentioned earlier, 70% of Medicaid adults are overweight or obese and nearly one-third smoke, somewhat higher rates than those for low-income privately insured adults (65% and 18% respectively). Both obesity and smoking are risk factors for preventable chronic diseases, including cancer, that increase morbidity and mortality as well as health care costs. The share of overweight/obese adults and adult smokers in Medicaid who report being counseled by their provider on diet (38%) or smoking (63%), while similar to the share for privately insured adults, highlights an important gap in preventive care and a need for more investment and effort (Figure 4). 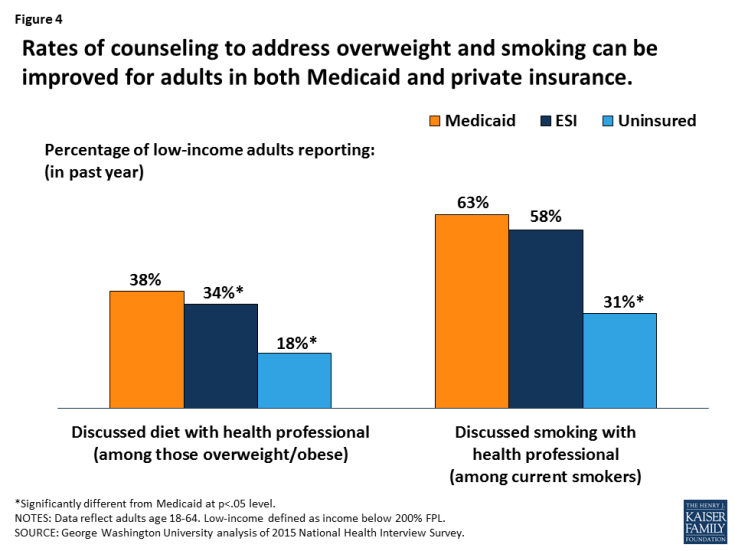 Figure 4: Rates of counseling to address overweight and smoking can be improved for adults in both Medicaid and private insurance.

What impact has the Medicaid expansion had on access to preventive care for low-income adults?

A large and growing body of studies demonstrate that Medicaid eligibility expansions can improve access to primary and preventive care. Research shows that Medicaid expansion is associated with increased visits to primary care providers and increased diagnosis of diabetes and high cholesterol, as well as increased screening for diabetes, and reduced rates of skipped medication due to cost. The Oregon Health Insurance Experiment provides strong evidence of increases in screening and medication use for depression and declines in self-reported and clinically observed depression among previously uninsured adults who randomly won a limited number of Medicaid “slots” through a state lottery. The expansion also led to increases in diabetes screening and medication use among the adults who gained Medicaid compared to those who remained uninsured. A focused study of health center patients in Oregon found increases in screening for obesity, blood pressure, smoking, and chlamydia, as well as increased rates of mammograms, Pap tests, and lipid testing for adults in the Medicaid group. The pre-ACA expansion of Medicaid in Massachusetts was associated with an increase in hospital utilization, as would be expected, but hospitalizations for preventable conditions fell.

Because Medicaid plays a large role in covering low-income adults and adult Medicaid enrollees are at elevated risk for preventable or treatable chronic conditions, ensuring access to preventive care and boosting utilization of these services among Medicaid adults is important to the national goal of improving population health while lowering health care costs. Medicaid expansion states have put preventive care within affordable reach of millions of previously low-income adults. State coverage of recommended preventive services without cost-sharing for all Medicaid adults would lower financial barriers to these services for many more of the nation’s poorest and sickest adults, increasing early detection and treatment of health conditions and risky behaviors, a necessary step to improve health outcomes and long-term trends in Medicaid costs. The House-passed American Health Care Act (AHCA) would both terminate enhanced federal funding for the Medicaid expansion to low-income adults and repeal the federal EHB requirements for Medicaid adults, threatening large losses of Medicaid coverage for adults as well as retrenchment in covered benefits, including preventive care for adults.