More Than 4 in 10 Republicans and a Third of Parents Now Oppose Schools Requiring Children to Get Vaccinated for Measles and Other Illness, Up Since the COVID-19 Pandemic Began

About 4 in 10 Seniors Have Gotten the New COVID-19 Booster; Many Vaccinated Adults Who Have Not Gotten the Booster are Skeptical of Its Value

Amid controversies around the COVID-19 vaccine and growing distrust of public health authorities, more than four in ten Republicans and Republican-leaning independents, and a third of parents, now say they oppose requiring children in public schools to receive some childhood vaccines, up since 2019, a new KFF COVID-19 Vaccine Monitor survey finds.

Overall, nearly three in ten adults (28%) nationally now say that parents should be able to decide not to vaccinate their children for measles, mumps, and rubella rather than those vaccinations being required to attend public schools, up from 16% in a 2019 Pew Research Center poll conducted before the COVID-19 pandemic. Among parents, opposition to requiring those childhood vaccines now stands at 35%, up from 23% in 2019.

While most of the public still say that healthy children should be required to get those vaccines to attend public schools (71%), that share is down from 82% in 2019.

The growing opposition stems largely from shifts among people who identify as Republican or lean Republican, with 44% now saying parents should be able to opt out of those childhood vaccines, up from 20% in 2019.  In contrast, the vast majority of Democrats and those who lean Democratic support requiring the vaccines for public school students (88%), little changed from 2019 (86%). 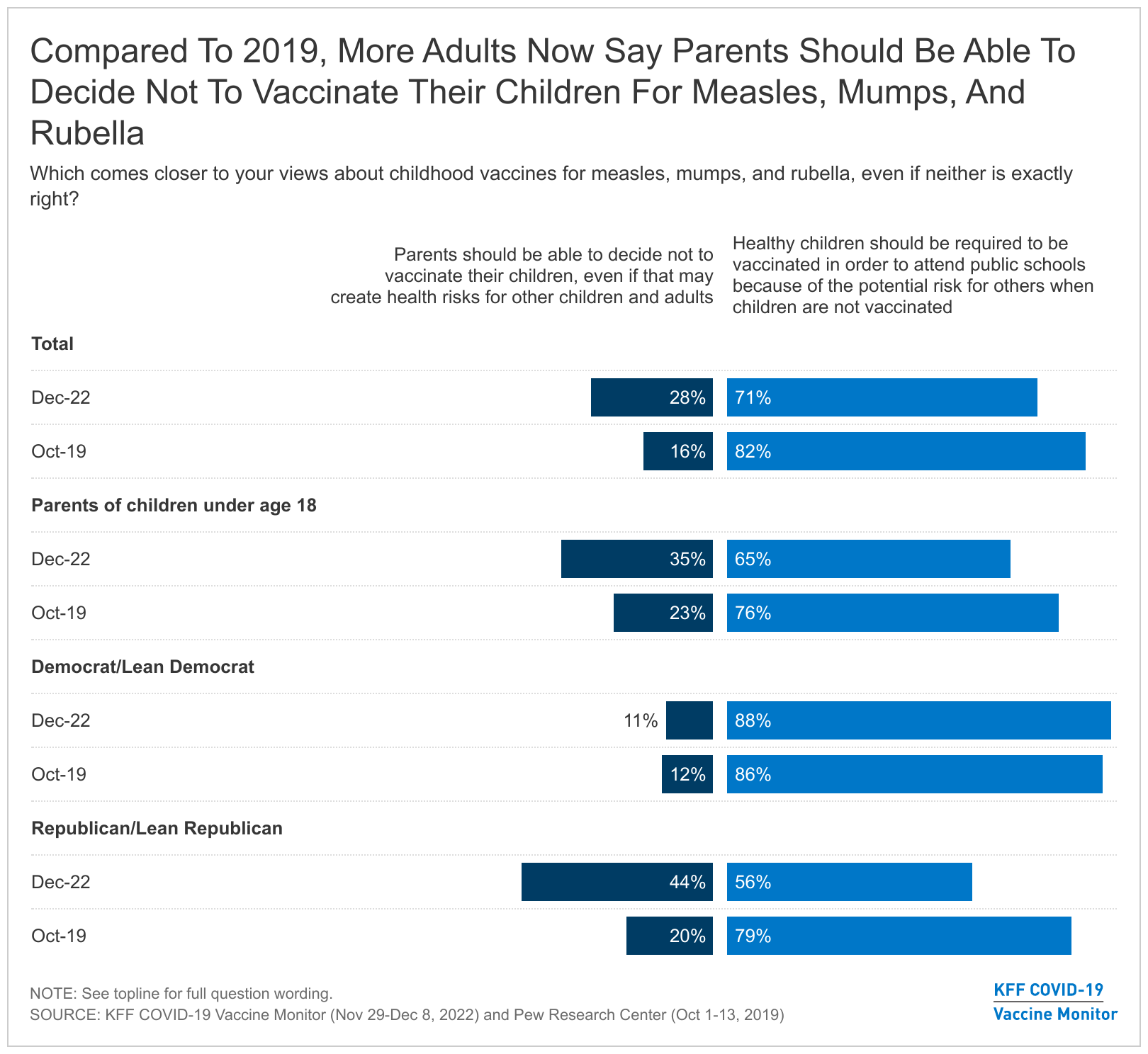 Currently, all states and the District of Columbia require children to be vaccinated against certain diseases, including measles and rubella, in order to attend public schools, though exemptions are allowed in certain circumstances.

The new survey also finds that about four in ten adults report that they either have already gotten the recommended bivalent booster shot (22%) or say they will get it as soon as they can (16%). The bivalent booster targets both the original and omicron COVID-19 strains and has been available since September.

Among adults ages 65 and older, who face higher risks from COVID-19, about four in ten (39%) say they have already gotten the bivalent booster, and another 16% say they intend to do so as soon as possible. Still, this currently leaves more than half of older adults without the protection of the bivalent booster.

Democrats (38%) are much more likely than independents (18%) or Republicans (12%) to say that they’ve gotten the new booster.

Vaccinated adults who have not gotten a bivalent booster are largely skeptical about its value. Among this group, more than four in ten (44%) say they don’t think they need the new booster, and more than a third (37%) say that they don’t think its benefits are worth it. A similar share (36%) say they are too busy and haven’t had time to get it.

Fewer cite other reasons such as bad side effects from earlier COVID-19 vaccines (23%), waiting to see if cases increase in their area (17%), or waiting until they travel or see vulnerable family and friends (12%).

About half (49%) of adults nationally say that they are worried there will be an increase in COVID-19 cases and hospitalizations in the U.S., though just about a third (36%) say they are worried they personally will get seriously sick from the virus. As in the past, Black and Hispanic adults, as well as people over age 65, are among the groups most likely to worry about getting seriously ill.

Amid reports about rising flu and RSV cases, parents are now at least as likely to worry about their children getting sick from those illnesses as from COVID-19. Roughly half of parents say they are at least somewhat worried that their children will get sick from RSV (56%), the flu (51%) and COVID-19 (47%).

Designed and analyzed by public opinion researchers at KFF, the Vaccine Monitor survey was conducted from Nov. 29 – Dec. 8, 2022, online and by telephone among a nationally representative sample of 1,259 adults, in English and in Spanish. The margin of sampling error is plus or minus 4 percentage points for the full sample. For results based on other subgroups, the margin of sampling error may be higher.