A new interactive map from the Kaiser Family Foundation provides a broad look at states’ laws shaping access to coverage for abortion in Medicaid and private insurance. The map includes the ability to view snapshots showing the extent of such limitations in states across the nation for the years 2000, 2010 and 2014. Taken together, the maps chart the increase in such limitations over that time period. 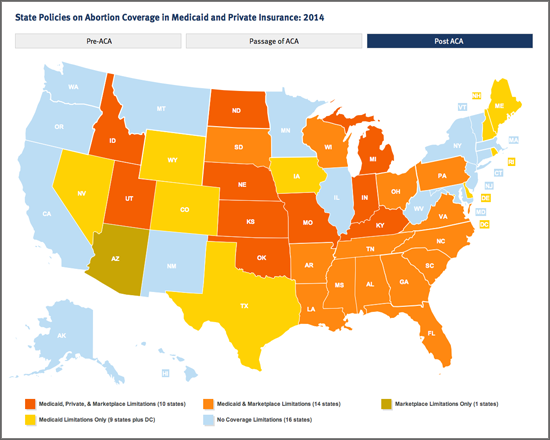 State and federal attempts to limit private insurance and Medicaid coverage of abortion services began soon after the 1973 Roe v. Wade Supreme Court decision legalizing abortion. However, the passage of the Affordable Care Act in 2010 fueled a new round of legislative efforts to curb insurance coverage of abortion, this time focusing on private plans in the new ACA insurance marketplace. While a handful of states restricted abortion coverage in private insurance prior to the ACA, many more enacted private plan limits and banned abortion coverage from Marketplace plans in the wake of the law’s enactment.

In addition to the new interactive map, a related resource, Coverage for Abortion Services and the ACA, provides a more detailed look at current federal and state policies on Medicaid and insurance coverage of abortion services.  For information about state policies impacting abortion, see the State Health Facts section of the Kaiser Family Foundation’s website.

For more information about Women’s Health Policy and the ACA, visit kff.org.