Nearly Half of the Uninsured, or 15.7 Million People, Are Eligible for Medicaid or Subsidized Affordable Care Act Coverage, Analysis Finds

Weeks away from the Affordable Care Act’s third open enrollment period, a new Kaiser Family Foundation analysis finds nearly half (49% or 15.7 million) of the 32.3 million nonelderly people in the United States without health insurance at the beginning of 2015 are eligible for Medicaid or subsidized coverage through an ACA marketplace.

On a state level, the share of the uninsured population eligible for those two forms of insurance-related financial assistance ranges from 35 percent in Nebraska and Texas to 75 percent in West Virginia, according to the analysis, which uses data from the 2015 Current Population Survey Annual Social and Economic Supplement and other sources. 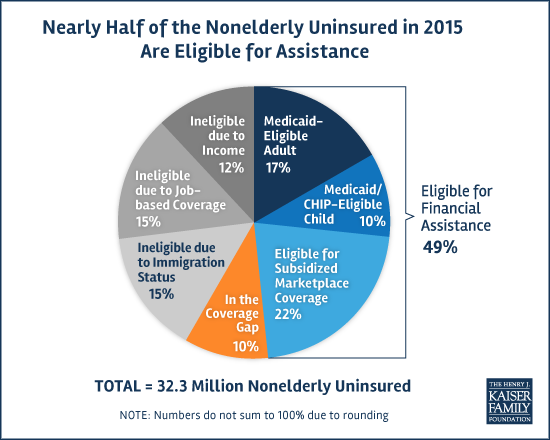 The analysis, based on an eligibility model developed by Kaiser researchers, provides state-level data on people without insurance who are eligible for Medicaid or subsidized ACA coverage, and on those who are ineligible.

Ten percent (3.1 million) of the nonelderly uninsured fall into a coverage gap in which they earn too much to be eligible for Medicaid but not enough to qualify for financial assistance through an ACA marketplace. The gap exists in the 20 states that have opted not to expand Medicaid – the state/federal insurance program serving low-income people — under the health care law.

New Estimates of Eligibility for ACA Coverage among the Uninsured is available at kff.org

For more information on the uninsured population in the United States, see our updated fact sheet Key Facts About the Uninsured Population.