As of Spring 2015, states had completed the second open enrollment period for the new Health Insurance Marketplaces established by the ACA and most of the 30 states that have adopted the Medicaid expansion to low-income adults were well into their second year of implementation, with a few implementing the expansion more recently. With the experience of two open enrollment periods under their belt, states can provide key lessons learned about outreach and enrollment experiences under the ACA. Moreover, with new coverage options now in place for over two years, state experiences can offer early insights into how health care access and utilization is changing as a growing number of people have gained coverage.

This brief provides an on-the-ground view of ACA implementation after completion of the second open enrollment period. It is based on 40 in-person interviews conducted in five states that have made different implementation choices, including three states (Colorado, Kentucky, and Washington) that have developed a SBM and adopted the Medicaid expansion and two states (Utah and Virginia) that rely on the FFM for enrollment of individuals into QHPs and that have not adopted the Medicaid expansion to date. The interviews were conducted by the Kaiser Family Foundation’s Commission on Medicaid and the Uninsured and Perry Undem Research/Communication with a range of stakeholders in each state, including Medicaid and Marketplace officials, consumer advocates, assisters, and hospital and community health center (CHC) representatives, during April and May 2015.

This work builds on previous analysis that examined states’ preparation for implementation prior to the beginning of the initial ACA open enrollment period in October 2013 and a subsequent report that identified key lessons learned from four states leading enrollment efforts at the completion of that first open enrollment period. Together, this body of work provides an in-depth, local level understanding of ACA implementation from multiple perspectives, tracking and documenting experiences and providing key lessons learned to help shape efforts moving forward.

The report presents key findings related to enrollment systems; enrollment and renewal; outreach, marketing, and enrollment assistance; and access to and utilization of care. It concludes with key priorities identified by stakeholders looking head.

The study states included in this report represent a mix of implementation approaches (Table 2). The ACA expanded health coverage through two key vehicles, new Health Insurance Marketplaces offering QHPs, which provide premium tax credit subsidies to offset the cost of coverage for moderate income adults, and a Medicaid expansion to low-income adults with incomes up to 138% of the federal poverty level. However, the 2012 Supreme Court ruling on the constitutionality of the ACA effectively made the Medicaid expansion optional for states. States have implemented the ACA in varied ways, with some establishing SBMs and others relying on the FFM or a partnership model. For the second open enrollment period, 17 states including the District of Columbia operated a SBM, though three of these states (New Mexico, Nevada, and Oregon) used the federal healthcare.gov website for enrollment; 7 states operated a Partnership Marketplace; and 27 states relied on the FFM. As of June 2015, 30 states, including DC, have adopted the Medicaid expansion, while the remaining 21 states have not, although debate continues in several states. Among the study states, Colorado, Kentucky, and Washington each established their own SBMs and have adopted the Medicaid expansion. Utah and Virginia rely on the FFM, healthcare.gov, to enroll individuals into QHPs, although Utah has its own state-operated Small Business Health Options (SHOP) Marketplace, Avenue H (See Figure 1). Neither state has adopted the Medicaid expansion to date, although there has been ongoing debate about the expansion in both states. Governors in both states put forward proposals for expansion but faced legislative opposition. Virginia’s legislative session concluded without adoption of the expansion, although the Governor continues to support it; Utah’s session concluded with the creation of a committee to continue work this summer followed by a possible special session. 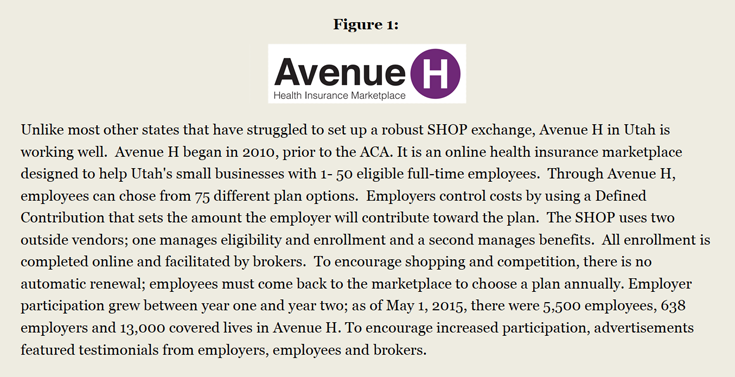