As noted above, making health care more affordable ranks second in the public’s overall priority list for the incoming administration, just behind improving public education. One reason for this may be people’s own experiences affording health care for themselves and their families. For example, one in five California residents (20 percent) reports problems paying medical bills, rising to three in ten among those with a debilitating medical condition (34 percent), those ages 18-64 who are on Medi-Cal (31 percent) or without health insurance (31 percent), and those with self-reported incomes below 200 of the federal poverty level (29 percent). Problems paying medical bills are also more common among California residents who are Black (30 percent) or Hispanic (28 percent) compared with those who are white (16 percent) or Asian (8 percent). [Figure 30]

Many of those struggling to pay medical bills report having to make certain sacrifices to pay off their bills. For example, about seven in ten of those with bill problems report cutting spending on basic household items (72 percent), two-thirds report putting off vacations or major purchases (66 percent), and 61 percent report using up all or most of their savings to pay their medical bills. [Figure 31]

Unexpected medical bills are also a problem for those with insurance. Three in ten non-elderly Californians with health insurance (31 percent) say there was a time in the past year when they received a medical bill they thought was covered, but their insurance did not cover the bill at all or paid less than they expected. About four in ten of this group (12 percent of all insured Californians) say this happened because the provider was not in their plan’s network. [Figure 32]

Whether or not they have personally experienced such bills, unexpected medical bills represent a large financial worry for Californians. Nearly two-thirds (63 percent) say they are very or somewhat worried about being able to afford unexpected medical bills, ranking higher than worries about affording out-of-pocket medical costs in general (56 percent), prescription drug costs (42 percent), or health insurance premiums (39 percent of those with insurance). Worries about surprise medical bills outrank worries about affording other basic needs, such as transportation costs (53 percent), housing costs (52 percent), and utilities (47 percent). [Figure 33]

Just a third (34 percent) of those with health insurance are aware that California law (through Assembly Bill No. 72 passed in 20171) prohibits providers from charging out-of-network prices for care received at in-network hospitals. [Figure 34]

Challenges affording care also may lead some Californians to delay or forgo medical treatments or prescription drugs. Over four in ten residents (44 percent) say they or another family member in their household has postponed or skipped care in the past year because of the cost, including skipping dental care or check-ups (30 percent), putting off or postponing getting health care (20 percent), skipping recommended tests or treatments (19 percent), not filling a prescription for medicine (18 percent), cutting pills in half or skipping doses of a medicine (12 percent), or putting off or postponing getting mental health care (10 percent). [Figure 35]

Californians with lower incomes, those without health insurance, and Black and Hispanic residents are more likely than their counterparts to experience problems paying medical bills, postponing or forgoing health care because of the cost, and worries about affording care. For example, those with self-reported incomes below 200% FPL are almost twice as likely as those with higher incomes to report problems paying medical bills in the past year, and much more likely to report skipping or delaying care (55 percent versus 36 percent). They are also almost twice as likely to say they are very worried about affording unexpected medical bills or general out-of-pocket health care costs. [Figure 36]

While numerous public and private initiatives seek to increase cost transparency for individuals, most Californians (62 percent) say it is difficult to find out how much different medical treatments and procedures provided by different doctors and hospitals would cost before they receive them. [Figure 38] As noted above, 76 percent of Californians think it is extremely or very important for the new governor and legislature to work on making information about provider costs more widely available. 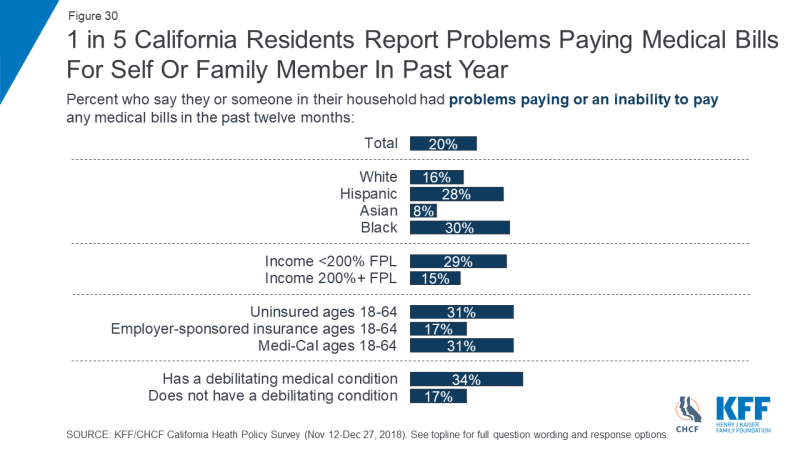 Figure 30: 1 in 5 California Residents Report Problems Paying Medical Bills For Self Or Family Member In Past Year 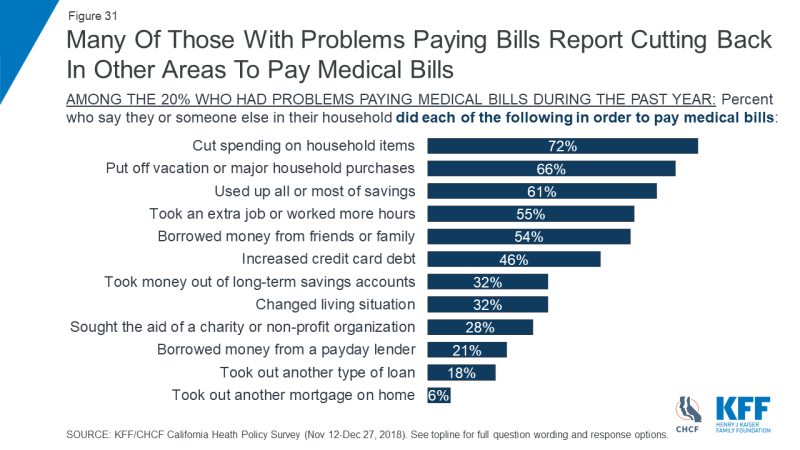 Figure 31: Many Of Those With Problems Paying Bills Report Cutting Back In Other Areas To Pay Medical Bills 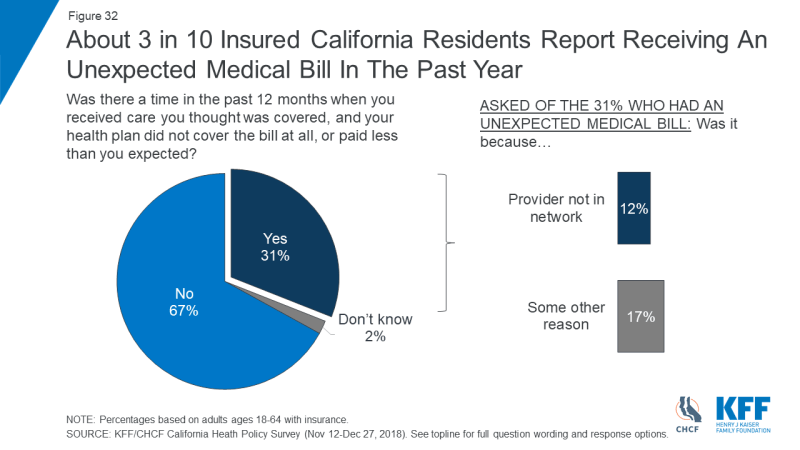 Figure 32: About 3 in 10 Insured California Residents Report Receiving An Unexpected Medical Bill In The Past Year 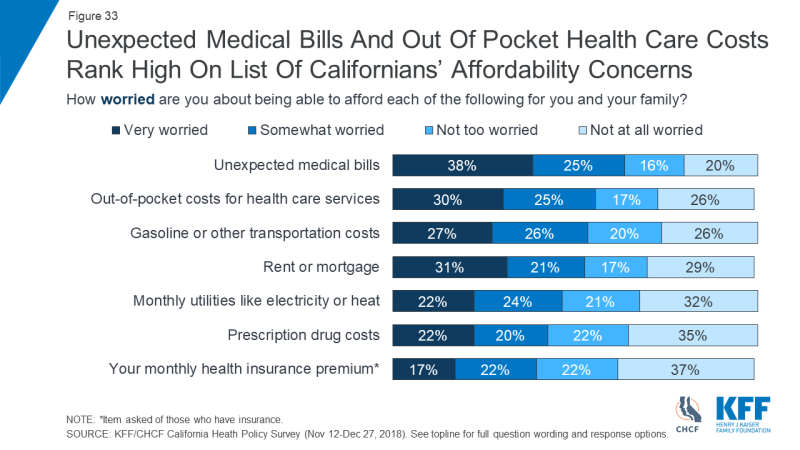 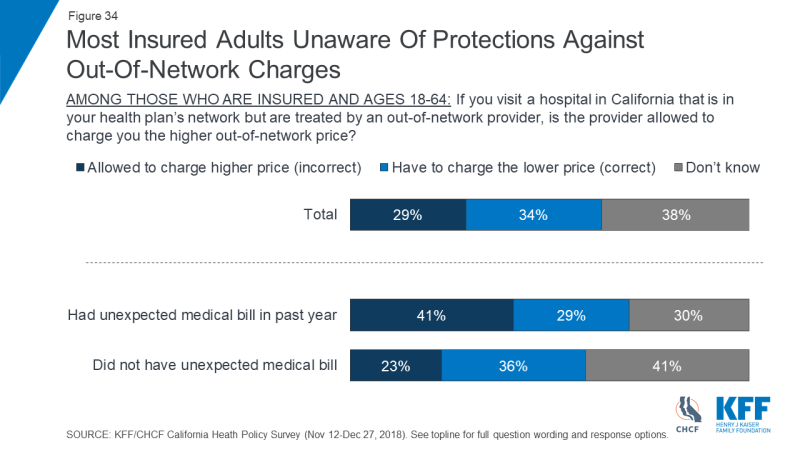 Figure 34: Most Insured Adults Unaware Of Protections Against Out-Of-Network Charges 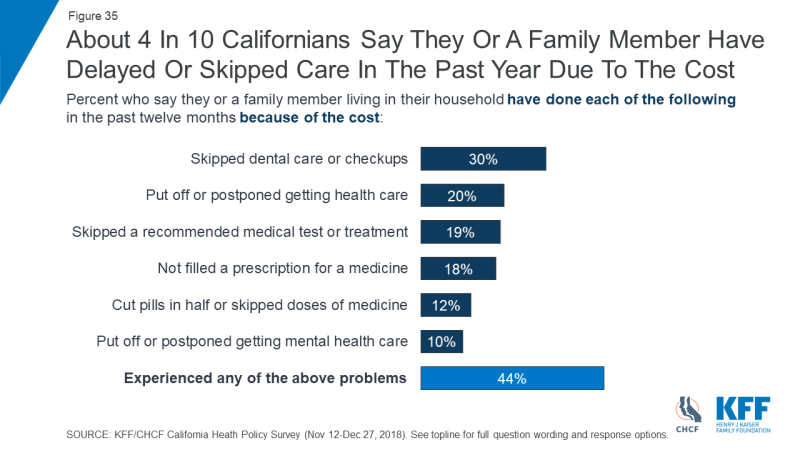 Figure 35: About 4 In 10 Californians Say They Or A Family Member Have Delayed Or Skipped Care In The Past Year Due To The Cost 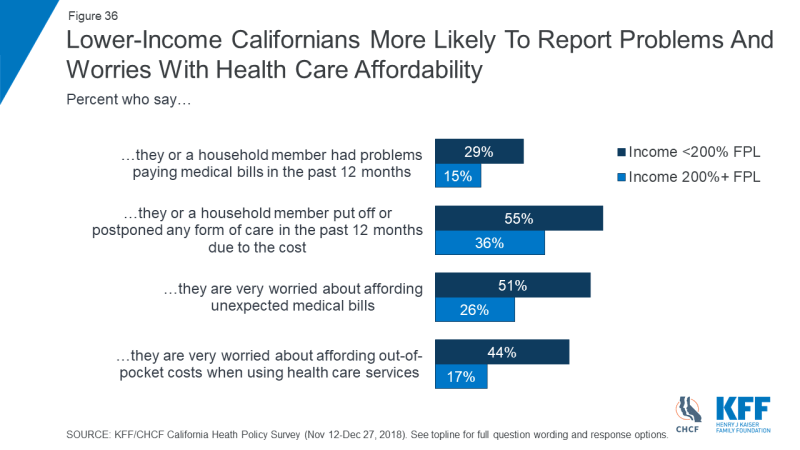 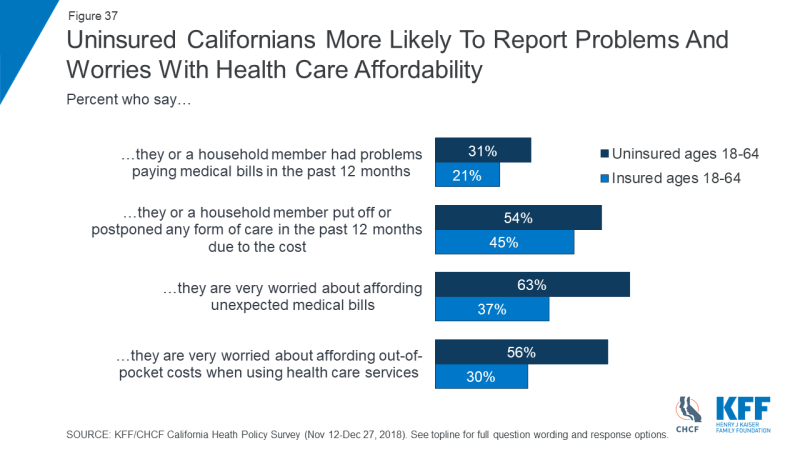 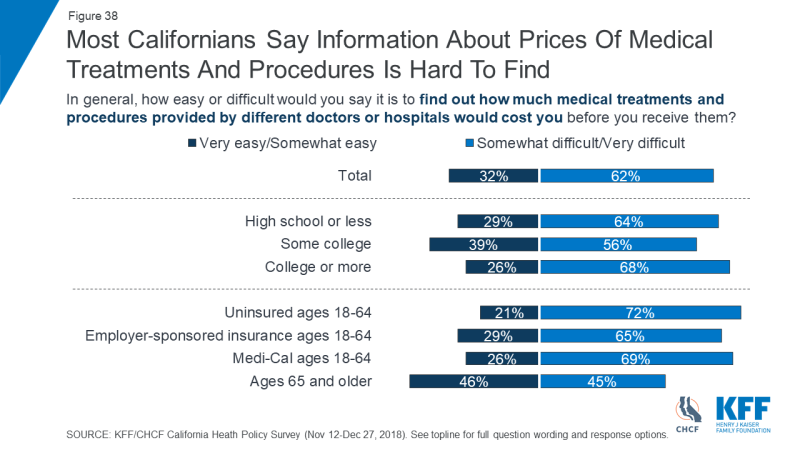 Figure 38: Most Californians Say Information About Prices Of Medical Treatments And Procedures Is Hard To Find

Section 4: Access To Providers And Provider Shortages Section 6: Experiences Of The Uninsured