Over 58 million Americans reside in geographic areas or belong to population groups that are considered primary care shortage areas. In these areas, known officially as primary care Health Professional Shortage Areas (HPSAs), the supply of primary care physicians relative to the population falls below federally defined standards.1 The proportion of Americans living in HPSAs varies widely by state, from 1.4% (Nebraska) to 57.3% (Mississippi), but in almost half the states, it is at least 20%, including six states (including DC) where it exceeds 30% (Figure 1). 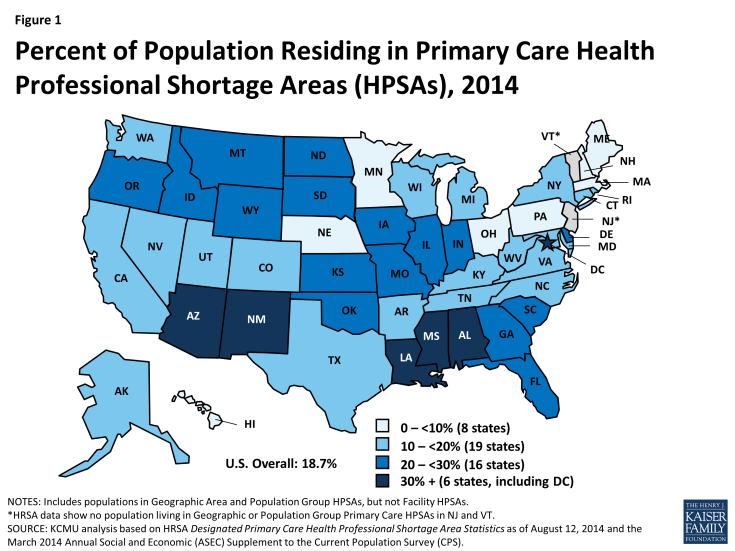 The demand for primary care is projected to rise over the next five years, due largely to population growth and aging, and to a smaller extent, to expanded health insurance.2 The Health Resources and Services Administration (HRSA), the federal agency focused on improving access to care and strengthening the health care workforce, projects a shortage of 20,400 primary care physicians in 2020, and other experts, too, have projected a large shortfall in the coming years.3 4 However, a recent Institute of Medicine (IOM) report on shaping the health care workforce for the future noted that such projections of primary care physician shortages are generally based on traditional health care delivery models and do not consider the potential of an expanded primary care role for physician assistants and advanced-practice nurses, redesign of health care, telehealth, and other innovations.5 This brief focuses on the untapped potential of one type of advanced-practice nurses – nurse practitioners – to increase access to primary care.

In 2012, about 127,000 NPs were providing patient care in the U.S., roughly half of whom – around 60,400 – were practicing in primary care settings.6 NPs are registered nurses who have completed Master’s degrees or higher level nursing degrees. Close to  90% of all NPs are prepared in primary care.7 Primary care NPs are significantly more likely than primary care physicians to practice in urban and rural areas, provide care in a wider range of community settings, and serve a high proportion of uninsured patients and other vulnerable populations.8 Studies show that NPs can manage 80-90% of care provided by primary care physicians.9 In addition, evidence from a substantial research literature shows that primary care outcomes, including disease-specific physiologic measures, improvement in pathological condition, reduction of symptoms, mortality, hospitalization and other utilization measures, and patient satisfaction, are comparable between patients served by NPs and patients served by physicians.10

The growing number and effective integration of NPs in our health care system could help alleviate pressures on primary care capacity. It takes much less time to produce new NPs than new physicians – an average of six years of education and training, compared to 11 or 12 years for physicians, including education and residency.11 HRSA projects a 30% increase in the supply of primary care NPs over the period 2010-2020, and estimates that projected increases in NPs and physician assistants (PAs), whose numbers are also projected to grow, could potentially reduce the expected shortage of primary care providers in 2020 by about two-thirds, to 6,400, if they are effectively integrated into the health care delivery system.12

However, state legislative and regulatory barriers prevent NPs in many states from practicing to their full potential. NP practice is regulated largely by the states through licensure laws and policy on “scope of practice” and prescriptive authority. Scope of practice refers to the range of services that NPs are permitted by their state to provide, and the terms on which they may provide them (Box).

The ACA included investments to expand the role of NPs in providing primary care. The law authorized up to $50 million for nurse-managed health clinics, and in 2012, the Department of Health and Human Services awarded $15 million in grants to support 10 such clinics over three years, expected to expand access to primary care and support training for more than 900 advanced-practice nurses. HHS has also used ACA funds to make grants to nursing schools to increase full-time enrollment in NP and nurse midwife programs.13

In some states, NPs have “full practice authority,” which means that they can evaluate, diagnose, and initiate and manage the treatment of patients, including prescribing medication, under the exclusive licensure authority of the state board of nursing. NPs in full practice states consult and refer patients to physicians and other providers based on patient needs, but the state does not require physician supervision of their practice. Other states permit “reduced” or “restricted practice,” requiring different degrees of physician involvement in NP practice. NPs in these states also face limits on their ability to diagnose, treat, and/or prescribe medication for patients.

The IOM has recommended that NPs be able to practice to the full extent of their education and training. The IOM’s first recommendation in its 2011 report, The Future of Nursing: Leading Change, Advancing Health, was “Remove scope-of-practice barriers.”14 The IOM report observed, “… what nurse practitioners are able to do once they graduate varies widely for reasons that are related not to their ability, education or training, or safety concerns, but to the political decisions of the state in which they work.” The IOM called for a review of state regulations by the Federal Trade Commission and the Department of Justice to identify those with unjustified anticompetitive effects.

What is the environment for NPs today?

Fewer than half the states permit NPs full practice authority. Today, NPs in 20 states (including DC) have full practice authority (Figure 2). Nineteen states require NPs to have a formal, written collaborative agreement with a physician in order to provide care, and these states restrict NP practice in at least one domain (e.g., treatment, prescribing). In the remaining 12 states, NP practice is even more restricted. These states require physician supervision or delegation for NPs to provide care. 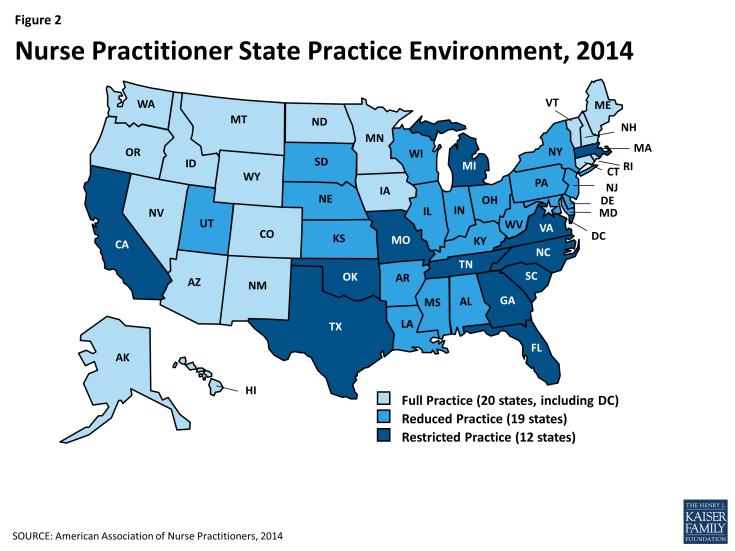 Medicaid fee-for-service programs cover services provided by pediatric and family NPs and pay them directly, but NPs’ situation is more complicated in Medicaid managed care. Some states pay NPs the same Medicaid fee-for-service (FFS) rates they pay physicians, but at least 20 states pay them at a lower rate, ranging from 75% to 95% of the physician fee for the same service.15 In the Medicaid managed care arena, various barriers impede the full deployment of NPs in many states. First, most but not all states (44) recognize NPs as primary care providers (PCPs) under state law or administrative policy.16 These policies affect

the role NPs can play in Medicaid, as well as more broadly. Second, while federal Medicaid law specifically permits states to recognize pediatric and family NPs as PCPs in their Medicaid primary care case management (PCCM) programs, it does not require them to do so, leaving this matter to state discretion. Third, the law is silent regarding the inclusion of NPs in Medicaid managed care organizations’ (MCO) provider panels. As a result, whether NPs can be designated PCPs in MCOs – which now serve more than half of all Medicaid beneficiaries – depends on states’ policy choices and individual MCO credentialing policies. Some state Medicaid programs enroll NPs as PCPs, while others do not, and few states require Medicaid plans to empanel NPs.

Medicare provides for direct payment to NPs for their services. Medicare generally pays NPs 85% of the rate a physician providing the same service would get from Medicare. Under the ACA, NPs are included among the primary care providers eligible to receive a quarterly 10% Medicare bonus payment for primary care services through 2015.

Rising demand for primary care, attributable to population growth and aging and expanded health insurance coverage under the ACA, is increasing already sharp strains on access to primary care in our health system. In the context of a broader set of strategies to shape a health care workforce and delivery systems that meet the needs of all Americans, optimizing our existing primary care capacity by removing barriers to NPs’ full deployment is a step that states, public and private health insurance programs, and managed care plans are in a position to take in the immediate term. Fuller participation of NPs in primary care might help, in particular, to increase access in underserved rural and urban areas. Also, NPs can play an integral role in team-based and patient-centered models of care, such as medical homes, Medicaid health homes, and Accountable Care Organizations (ACOs), which are aimed at improving care especially for people with chronic and complex health care needs. Delivery system innovations along these lines, underway in pockets around the country, may provide new evidence about effective approaches to organizing care, ensuring access, and improving outcomes for patients.