While many employers pay for a large share of covered workers’ health insurance premiums, the survey finds that employer-sponsored health insurance does not offer iron-clad protection against health care affordability challenges. Four in ten adults with employer coverage say that in the past year they had problems paying medical bills or difficulty affording their premium, deductible, co-pays, or an unexpected medical bill for themselves or a family member. When this group is asked to say which has been the biggest problem for their family, medical bills they had to pay before meeting their deductible (31 percent) and unexpected medical bills (23 percent) top the list, while fewer say the biggest burden is their prescription drug costs (11 percent), medical visit co-pays (10 percent), or health insurance premiums (8 percent). 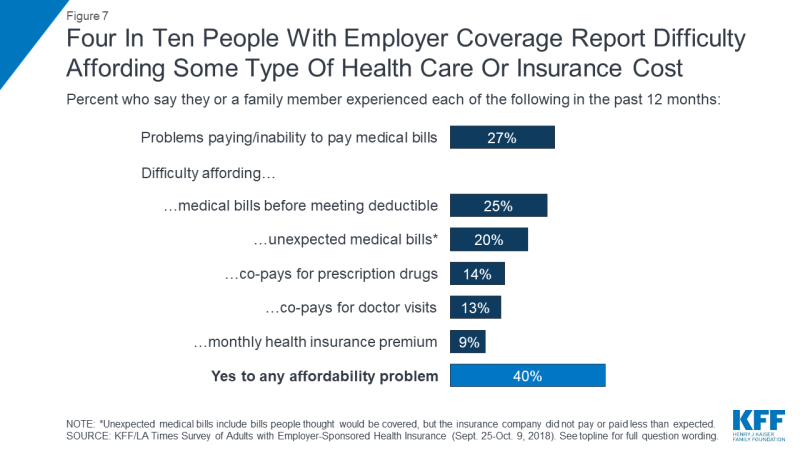 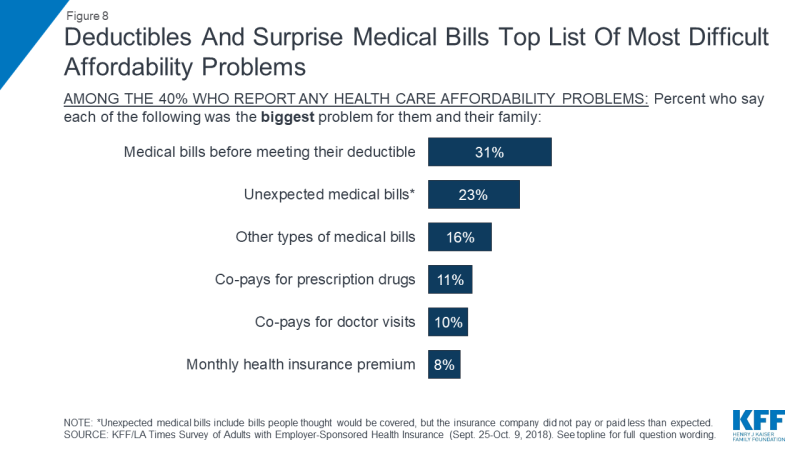 Among the 40 percent who report problems affording some type of health care cost in the past year, many report making various sacrifices in order to pay these costs. Two-thirds of this group (representing about a quarter of all adults with ESI) say they put off vacations or major household purchases or cut back spending on food, clothing, or basic household items. About half (one in five among the total) say they increased their credit card debt or used up all or most of their savings to pay for health care. One-third (14 percent of total) say they took on an extra job or worked more hours and a quarter (10 percent of total) reporting borrowing money from friends or family or taking money out of a long-term savings account. Smaller shares say they took out a loan, sought the aid of a charity or non-profit, changed their living situation, or used the internet to raise funds to pay for medical care.

Figure 9: Those With Employer Coverage Who Have Problems Affording Health Care Report Many Sacrifices To Pay Bills

In addition, 41 percent of those who had difficulty affording health care costs (17 percent of all adults with employer-sponsored insurance) say they feel they have had to make a difficult sacrifice in order to pay health care or insurance costs in the past 12 months. When asked to describe in their own words the most difficult sacrifice they have made, responses ranged from cancelled vacations, to skipped meals, to increased debt, to forgoing needed medical care.

In addition to making sacrifices to afford care, about half (51 percent) of adults with employer health coverage report that they or someone in their household has skipped or delayed some type of medical care or prescription drugs in the past 12 months because of the cost. This includes about a third each who report relying on home remedies or over-the-counter drugs instead of going to see a doctor (35 percent) or putting off or postponing needed care (33 percent), about a quarter (24 percent) who report not getting a recommended medical test or treatment, and about one in five (18 percent) who report not filling a prescription, cutting pills in half, or skipping doses of medicine because of the cost. 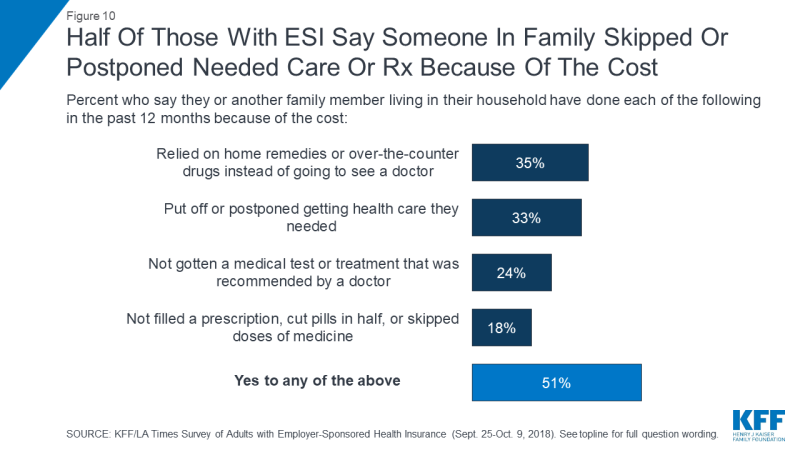 Figure 10: Half Of Those With ESI Say Someone In Family Skipped Or Postponed Needed Care Or Rx Because Of The Cost

Both difficulty affording health care expenses and forgoing or delaying care due to cost are more commonly reported among certain groups, including those with lower incomes, those in higher deductible plans, and those who say someone covered by their plan has a chronic health condition. For example, while 40 percent of all adults with employer coverage say they’ve had problems paying medical bills or difficulty affording health care or insurance costs for themselves or their family in the past year, the shares are higher among those with annual household incomes below $40,000 (65 percent), those who say someone covered by their plan has a chronic condition (49 percent), and those in the highest deductible plans (49 percent). Similarly, while about half overall report that someone in their household skipped or postponed some type of health care in the past year because of the cost, the share rises to around six in ten among those with the lowest incomes, the highest deductibles, or a chronic condition. 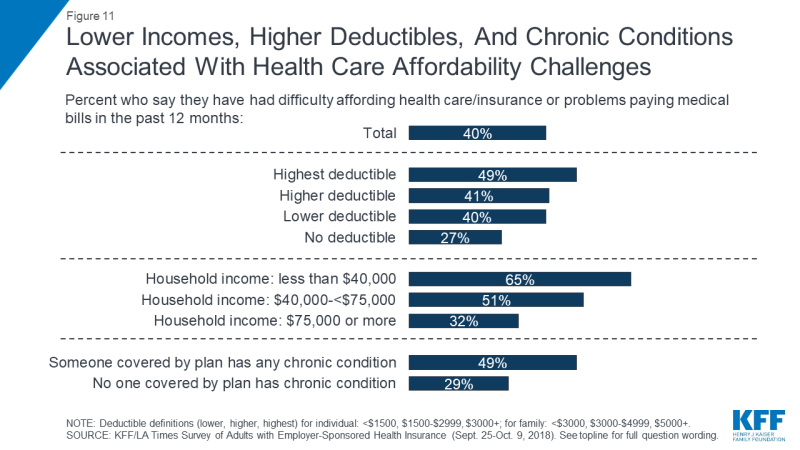 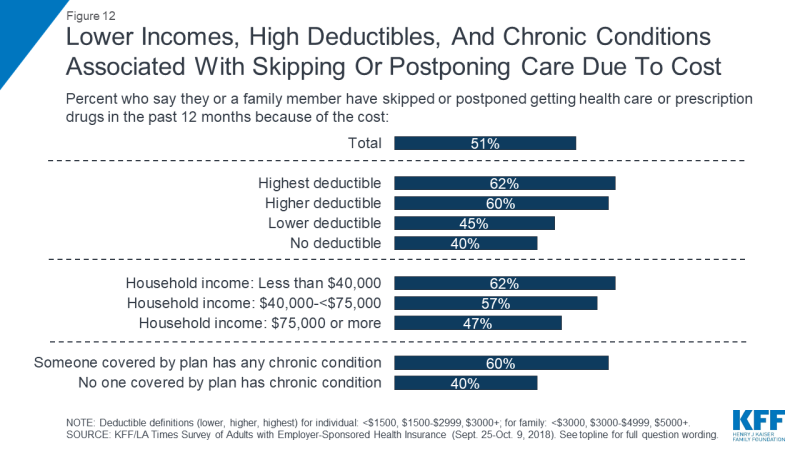 Section 1: Profile of adults with employer-sponsored health insurance and overall views of coverage Section 3: The experiences of those with high deductibles and those with chronic conditions