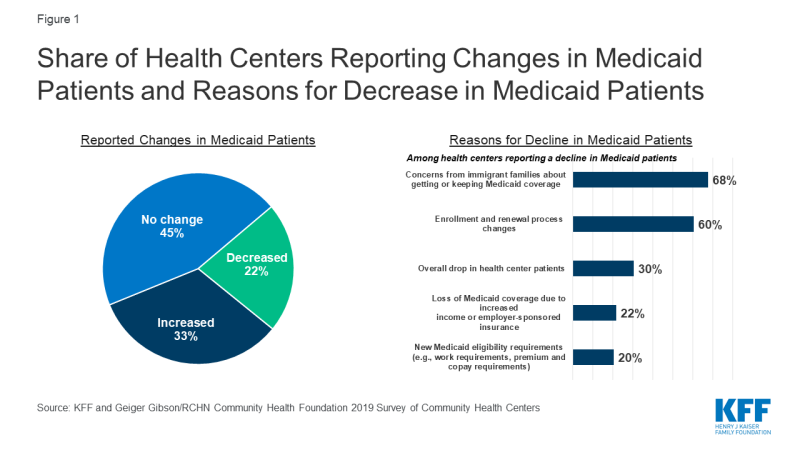 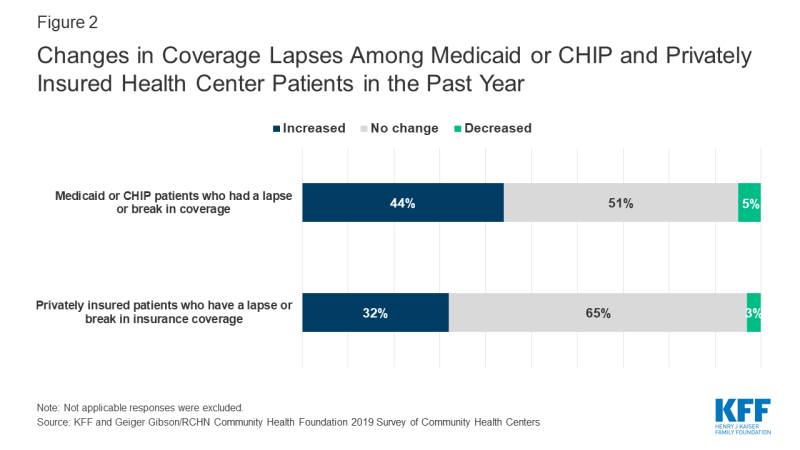 Figure 2: Changes in Coverage Lapses Among Medicaid or CHIP and Privately Insured Health Center Patients in the Past Year

Health centers reported their privately insured patients face increasing challenges affording coverage. More than six in ten health centers (61%) reported an increase in the past year in the percentage of insured patients who are unable to pay their deductibles and cost-sharing payments, and nearly half (49%) reported an increase in privately insured patients paying sliding scale fees (Figure 3). Health center patients qualify for sliding fee scale payments based on their income. An increase in the number of patients with private insurance who pay the sliding fee scale in lieu of the health plan’s copayments or other cost sharing suggests those payments are unaffordable to the individual. 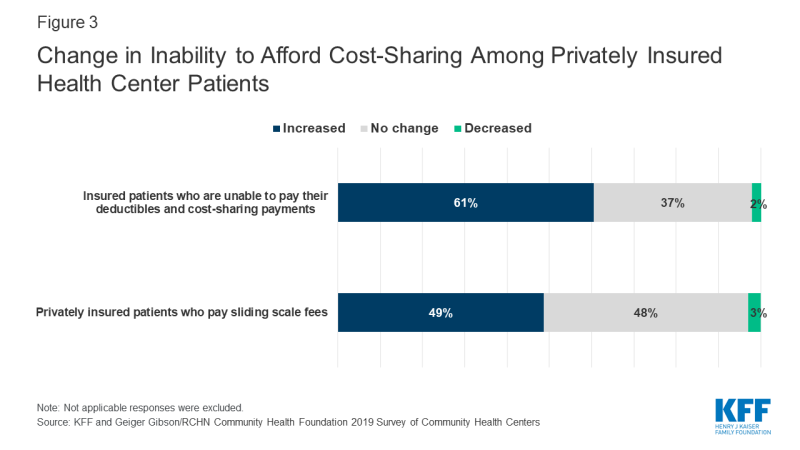 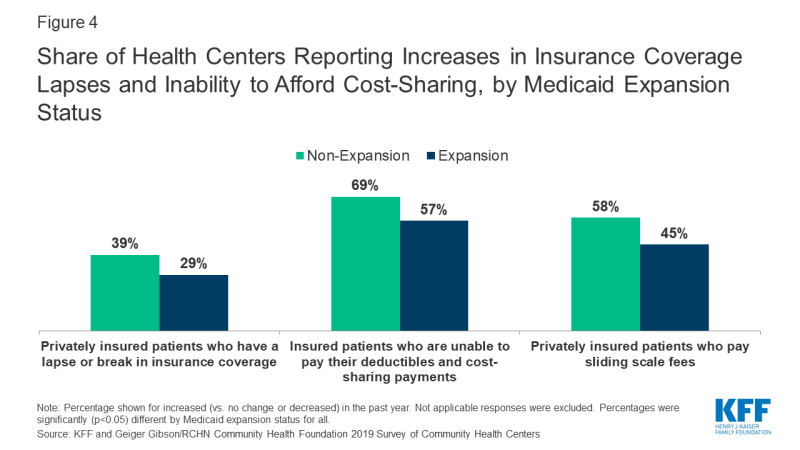 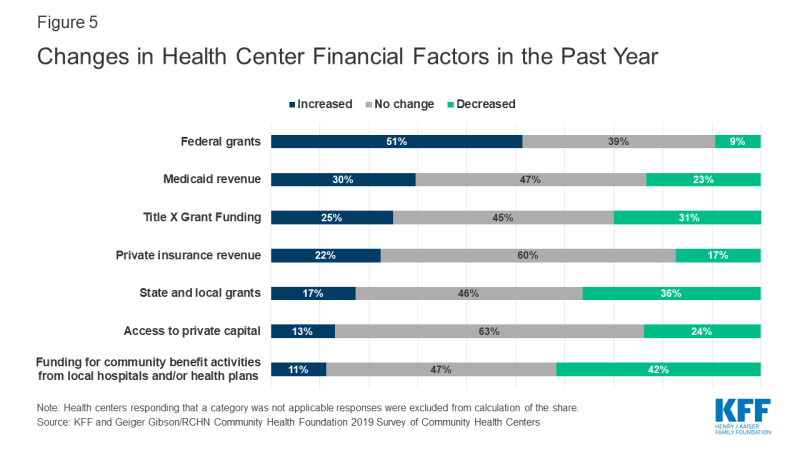 Figure 5: Changes in Health Center Financial Factors in the Past Year 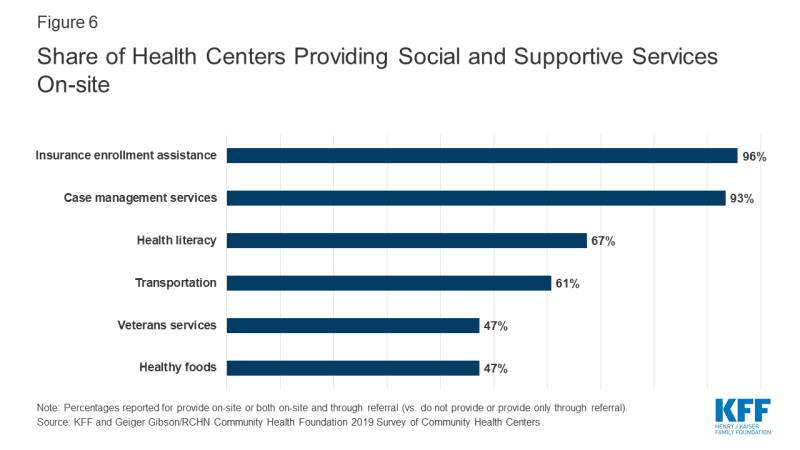 As of March 2020, the Centers for Medicare & Medicaid Services (CMS) had approved Medicaid Section 1115 waivers to implement work/community engagement requirements for ten states and ten state proposals are pending.3 At the same time, federal courts have set aside four approvals (Arkansas, Kentucky, Michigan, and New Hampshire) and work requirements in another four states with approved waivers—Arizona, Ohio, South Carolina, and Wisconsin—have not yet been implemented. Indiana, which has implemented work requirements, announced that it will temporarily suspend enforcement of the requirements pending the outcome of a legal challenge.4 A work demonstration was in effect and moving forward in Utah but was suspended on April 2, 2020 due to the COVID-19 pandemic.5 However, the future of these demonstrations may be in doubt following a ruling by a federal appeals court upholding a lower court’s decision striking down the work requirements in Arkansas. Before Arkansas’s work requirements program was halted by the court, over 18,000 Medicaid enrollees lost coverage; over 95% of those losing coverage either met the requirements or qualified for an exemption.6

Survey findings revealed a great deal of confusion and lack of information about the status of work requirement waivers and how those work requirements would be implemented. In states with an approved or pending waiver at the time of the survey, one in five respondents incorrectly identified the status of the state’s approved or pending waiver or indicated that they did not know if the state had or was considering a waiver. Among the survey respondents who correctly said that their state had an approved or pending waiver to implement Medicaid work/community engagement requirements or was considering developing a waiver, six in ten said their state had neither provided nor offered to provide training on the work requirements (Figure 7). Despite this lack of training from the state, nearly half (48%) of health centers reported they or their Primary Care Association (PCA) had provided or planned to provide training to their employees. 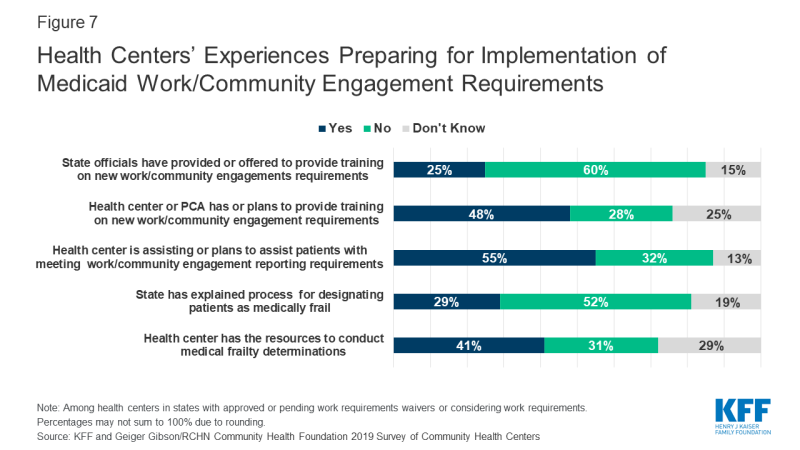 Health centers perceive that their patients who are not currently working face many barriers to work. All health centers, regardless of their state’s waiver status, were asked about potential barriers to working among their adult, non-elderly, and non-disabled Medicaid patients who are not currently working. They reported a mix of health and mental health-related barriers as well as geographic and economic barriers to work. Over seven in ten health centers reported that many of their patients faced substance use disorders, acute or chronic mental health conditions, and acute or chronic physical health conditions (Appendix Table 1). Similar shares of health centers noted other barriers, such as child caring responsibilities, lack of transportation to jobs, or inadequate skills or education. Compared to health centers in rural areas, urban health centers were more likely to report as barriers preventing patients from working a mismatch between available jobs and patients’ skills and education and family caretaking responsibilities, while rural health centers were more likely than their urban counterparts to report a lack of jobs in the community, and the seasonal nature of many jobs.

Health centers also indicated their patients would likely face many barriers that would make it difficult for them to report work activity. In addition to confusion over reporting rules and deadlines, over half of health centers (57%) reported that lack of access to a computer would be a barrier for many patients and nearly half (47%) reported not having internet service would be a barrier for many patients, which would prevent them from being able to report work activity by phone or online, as required by several states (Appendix Table 2).

New rules governing the Title X family planning program went into effect on July 15, 2019, imposing new restrictions on grantee activities. These restrictions include blocking participation of program providers that also offer abortion services, barring staff from fully counseling pregnant patients about all options, and requiring mandatory referral of pregnant women for prenatal care regardless of patient choice. Before the restrictions took effect and as of June 2019, 4,008 Title X clinics were in operation. By December 20, 2019, all 410 Planned Parenthood health centers had withdrawn from the program, and an additional 631 Title X clinics, including some community health centers, were no longer participating in Title X.7 The decision to stop participating in Title X means the loss of funding to support family planning services at these clinics and health centers.

As of July 2019, a quarter of health centers reported participating in the Title X program, though that number may have changed following implementation of more restrictive rules. The share of health centers reporting receiving Title X funding was similar to the 26% who said they received Title X funding in 2017.8 Since the survey, which was conducted before the new rules went into effect, a significant number of health centers may have dropped their Title X participation, although a count is not available. Some health centers may perceive a conflict between the Title X counseling and referral ban and its physical and financial separation requirements and health centers’ patient care obligations under their funding authority (Section 330 of the Public Health Service Act).9,10 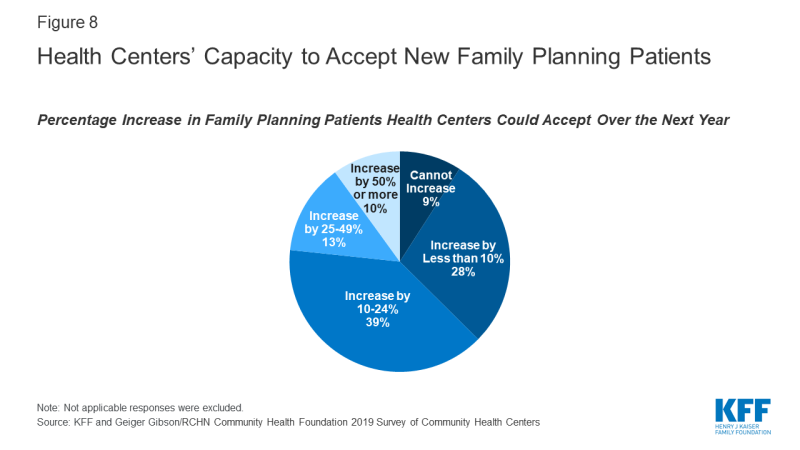 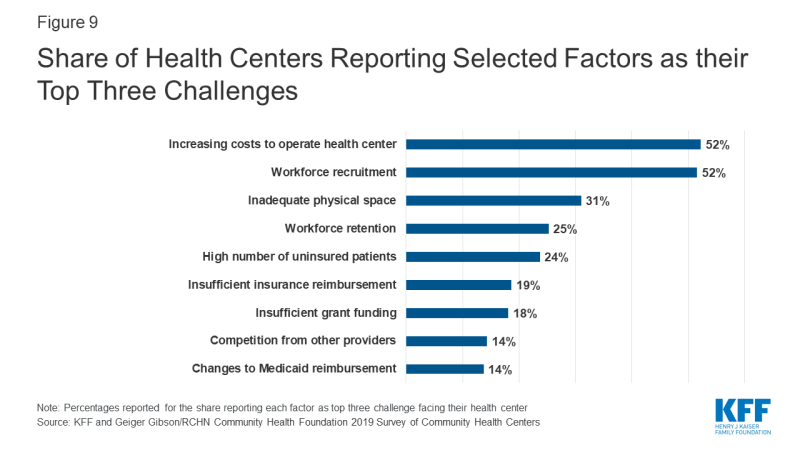 As federal policymakers turn to health centers during this time of crisis, they will play an important role in providing access to COVID-19 testing as well as ongoing primary care services for low-income, medically underserved communities. However, even as health centers continue their historic growth brought about by the ACA that may position them well to respond to the crisis, some have encountered limits on their ability to meet the needs of their patients because of recent policy changes, especially those that have resulted in recent declines in Medicaid coverage. While many states and the federal government have temporarily suspended some policies that create barriers to enrolling in Medicaid or to maintaining Medicaid coverage during the emergency, the reinstatement of these policies after the immediate emergency ends could make it harder for health centers to serve their communities in the longer term.

Through coronavirus response legislation, the federal government directed an initial $100 million to health centers12 and later directed over $1.3 billion in emergency grants to health centers to enable them to continue serving their patients during the crisis, and funded the Community Health Center Fund through November 2020.13 Yet, the economic upheaval from this pandemic is likely to persist long after the threat from the virus diminishes. While over half of health centers reported that federal grant funding had increased in the past year, the failure of Congress to pass a long-term extension of the Community Health Center Fund threatens to jeopardize the stable funding health centers have experienced for the past decade. The importance of stable future funding will be even greater in the aftermath of the pandemic as health centers seek to resume normal operations.