Starting in Spring 2018, the Trump Administration implemented a new zero tolerance policy for individuals entering the U.S. without authorization. This policy resulted in the separation of children from their parents because the parents were criminally prosecuted for illegal entry into the country. On June 20, 2018, President Trump signed an Executive Order to generally detain immigrant families together while their criminal and immigration cases are being processed. However, a court ruling limits the length of time the federal government can hold children in detention to 20 days and the Executive Order did not address reunification of separated families. On June 26, 2017, a court issued a preliminary injunction to prohibit family separation except when a parent is determined to be unfit or presents a danger to a child and require reunification of families who have been separated. This fact sheet highlights key health implications of family separation and detention.

How did zero tolerance policy lead to family separations?

According to media reports, DHS separated over 2,342 children from parents under its zero tolerance policy between May 5 and June 9, 2018, an average of 65 children each day.1 In early May 2018, after an initial pilot period in Texas, the Trump Administration implemented a new zero tolerance policy for individuals entering into the U.S. without authorization. Under this policy, the federal government criminally prosecutes any individual apprehended while crossing the border, which results in them being placed into criminal custody. When the federal government took adults into criminal custody, they separated them from their children since children cannot be held in jail or prison. The Department of Homeland Security (DHS) applied this zero tolerance policy broadly to individuals crossing the border without authorization, including those seeking asylum after entering the U.S. outside a port of entry. However, reports suggest it has become increasingly difficult for individuals to seek asylum through ports of entry,2 and there have been reports that some children were separated from parents who entered through a port of entry to seek asylum.3

DHS designated children separated from their parents as “unaccompanied alien children” and transferred their care to the Office of Refugee Resettlement (ORR), which is within the Department of Health and Human Services (HHS). Historically, this program primarily cared for children who entered into the U.S. without an adult, who are a different group from the children separated from their parents.4 Children separated from their parents generally were placed in an ORR-funded facility, which includes over 100 shelters in 17 states. ORR facilities are responsible for providing children they house with education, health services, case management, and socialization and recreation. Some separated children were also placed into foster care; ORR may also place children with relatives residing in the U.S. DHS indicated that children could be reunited with their parent after the parent is released from custody by the Department of Justice (DOJ) to be deported or begin the process of seeking asylum.5 However, reports suggest that there were no clearly established policies for reuniting families and that some parents were deported without their children or unable to reunite with their children after being released from custody.6

How does the Executive Order affect treatment of families?

On June 20, 2018, President Trump signed an Executive Order that maintains the zero tolerance policy but directs DHS to detain families together where appropriate and consistent with law and available resources for the duration of their criminal and immigration case proceedings.7 Because immigrant cases can take months or longer to process, under this order, families could be facing extended time in detention. However, under a previous court ruling, known as the Flores settlement agreement, the federal government cannot detain children in secure facilities for more than 20 days (Box 1).8 Flores also establishes minimum standards for facilities holding children, including requiring that they be state-licensed. As such, the Executive Order also directs the Attorney General to file a request with the court to modify the Flores settlement agreement. As directed by the Executive Order, on June 21, 2018, the DOJ filed a request that asked the court to modify Flores by allowing the government to detain children with their families for the duration of their criminal and immigration proceedings, beyond the 20-day limit, and to relieve the government of the obligation to hold children in state-licensed facilities.9

What are the key health implications of family separation and detention?

Family separation or detention often compounds existing trauma and stress that children and families have already experienced in their home country or on their journey to the U.S. Many families seeking entry to the U.S. are fleeing dangerous environments where children may have witnessed or experienced violence or gone without basic needs.

Separating children from their parents exposes them to trauma and toxic stress that can have lifelong negative impacts on their mental and physical health. As noted by the American Academy of Pediatrics (AAP), exposing children to traumatic events and prolonged or toxic stress such as separation from a parent disrupts a child’s healthy development and can lead to physiologic changes that result in short- and long-term negative effects on physical, mental, and behavioral health (Box 2).1011 Children in families in which a parent has been detained and deported experience significant behavior changes including changes in eating and sleeping, frequent crying, increased fear and anxiety, and/or withdrawal or anger.12 In addition, some children experience speech and developmental difficulties, including regression and reversal of developmental milestones.13

Detention, for even brief periods, has short- and long-term negative effects on the health of parents and children. Studies show high levels of psychiatric distress, including depression and post-traumatic stress, among detained asylum seekers, even after short detention periods, and that symptoms worsen over time.14 Global studies also show significant effects for children held in detention, including depression, post-traumatic stress, suicidal thoughts and behaviors, developmental delays, and behavioral issues.15 In a policy statement, the AAP notes that research documents negative physical and emotional symptoms among detained children and adults and also shows negative impacts on the parent-child relationship.16

What are the cost implications of these policies?

Detaining families and children is more expensive than alternative community-based supervision and monitoring programs (Figure 1). According to the 2018 budget request for U.S. Immigration and Customs Enforcement (ICE), the average daily rate for a family bed in a detention center is $319.17 Costs for housing a child separately in an ORR-funded facility were $248 on average per day in 2014.18 However, daily costs for recently constructed temporary or tent-based shelters are estimated to be substantially higher, at $775 per person per night.19 The cost of monitoring individuals in the community through alternatives to detention is much lower. Specifically, the 2018 ICE budget request notes that the daily cost of community supervision and monitoring is $4.50.20 The average daily cost was $36 for the Family Case Management Program, a community-based program for families seeking asylum, which the Trump Administration ended in 2017. 21 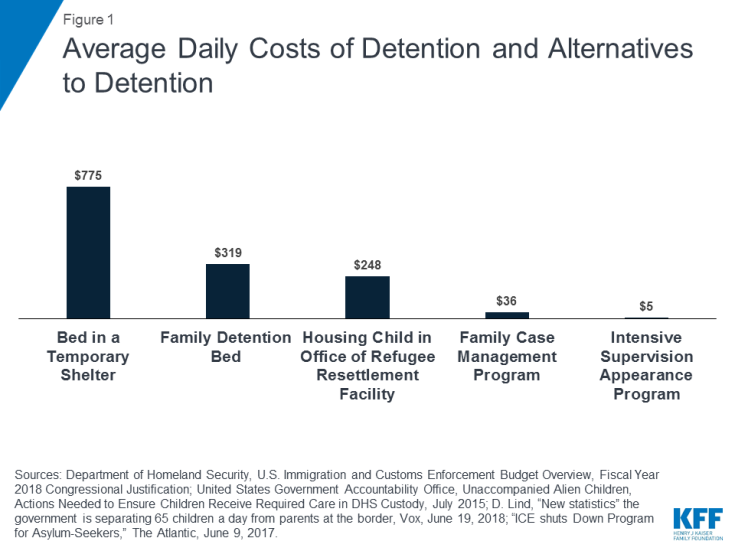 Figure 1: Average Daily Costs of Detention and Alternatives to Detention

After President Trump signed his Executive Order, U.S. Customs and Border Protection issued a statement indicating that family unity will be maintained for families apprehended crossing the border without authorization.22 It remains unclear how the inconsistency between the Executive Order’s requirement for family detention for the duration of criminal and immigration proceedings and the Flores agreement, which establishes a 20 day limit on the length of time a child can be detained, will be resolved. As of June 26, 2018, the court has not yet ruled on the DOJ’s June 21 request for modifications to the Flores agreement that would allow for children to be detained for the duration of their parent’s criminal and immigration proceedings. On June 25, 2018, U.S. Customs and Border Protection indicated that, although the zero tolerance policy is still in effect, they have halted referrals of adult immigrants to criminal prosecution for crossing the border.23

DHS has released information on the process to reunify families separated under the zero tolerance policy, but did not specify how long it would take to reunify all separated children. DHS reports that it has established a process to “ensure that family members know the location of their children and have regular communication after separation to ensure that those adults who are subject to removal are reunited with their children for the purposes of removal.”24 DHS also notes that it knows the location of all children in custody and is working to reunite the children with their families, although it does not specify the timing and process for reuniting parents released from detention but seeking asylum to stay in the U.S. As of June 23, 2018, DHS reports that it has reunited 522 of the over 2,300 children who were separated from an adult under the zero tolerance policy. DHS did not provide an estimate of how long it will take to reunite the remaining families.

On June 26, 2018, a federal judge ordered a preliminary injunction to halt the separation of families and require reunification of separated families within designated timeframes.25 This injunction was in response to a class action suit filed on behalf of all adult parents who have been or will be detained in immigration custody and have a minor child who is or will be separated from them and detained in DHS or ORR custody. Specifically, the preliminary injunction bars the federal government from detaining parents separate from their children, requires that children be reunited with their parents when the parents are released from custody, and prohibits the removal of parents from the country without their children. The court allows for an exception from these requirements if there is a determination that the parent is unfit or presents a danger to the child or the parent voluntarily declines to be reunited with the child. The court further requires that the federal government reunite all children under age five with their parents within 14 days of the order and all children age five and older within 30 days of the order. Moreover, it requires the federal government to immediately take all steps necessary to facilitate regular communication between separated parents and their children and ensure all parents have telephone contact with their children within 10 days of the order. In a separate case, 17 states have filed suit against the Administration challenging family separation.

The zero tolerance policy at the border adds to a range of other recent policies negatively affecting the health and well-being of immigrant families, including families with U.S. born citizen children already residing in the U.S. Since President Trump has taken office, he has implemented a number of policies to enhance immigration enforcement and restrict legal immigration (Figure 2). Focus groups conducted in Fall 2017 found that these policies, along with rising anti-immigrant sentiment, are leading to resounding levels of fear and uncertainty among immigrant families, including those with lawful status. Further, this fear and uncertainty are having significant negative effects on the health and well-being of children in immigrant families already present in the U.S., who are largely U.S.-born citizens. 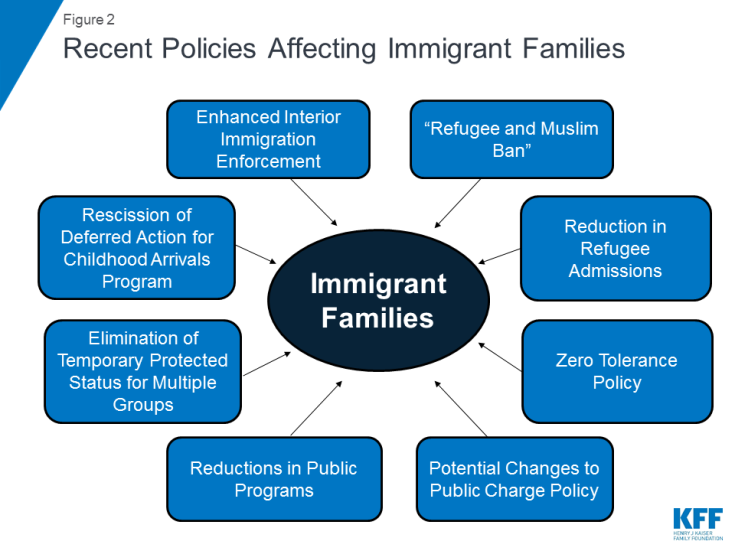 The Administration is considering other potential policy changes that would negatively affect the health and well-being of immigrant families, including their citizen children. Notably, the Administration is pursuing changes that, for the first time, would allow the federal government to take into account use of Medicaid, CHIP, subsidies for Marketplace coverage and other health, nutrition, and non-cash programs when making public charge determinations. Under these changes, use of these programs, including Medicaid, CHIP, and subsidies for Marketplace coverage, by an individual or family member, including a citizen child, could result in the federal government denying an individual a “green card” or adjustment to lawful permanent status or entry into the U.S. These changes would likely result in reduced participation in Medicaid, CHIP, Marketplace coverage, and other programs by immigrant families, including citizen children, even though they would remain eligible. Decreases in Medicaid and CHIP enrollment would increase the number of uninsured and reduce access to care, increase financial strains on families, and widen disparities in coverage.