The latest Medicare projections from the Congressional Budget Office (CBO) show the extent to which the COVID-19 pandemic has hurt Medicare’s financial outlook, and foreshadow the tough choices facing the next President and Congress. According to CBO’s estimates, Medicare’s Hospital Insurance Trust Fund will have insufficient funds to cover all benefit costs beginning in 2024 – just four years from now, and sooner than last year’s projected depletion date of 2026. Addressing this shortfall will require lawmakers to make politically difficult policy choices, such as lowering payments to providers or plans, reducing benefits, or increasing revenues.

The outlook for the Medicare HI trust fund has worsened in recent years due to a combination of factors, including the economic impact of COVID-19 on payroll tax revenue and several laws enacted by Congress and signed into law by President Trump that either increased Medicare spending or reduced revenues, including legislation that cut taxes and repealed the Independent Payment Advisory Board, the ACA individual mandate penalty, and the “Cadillac tax”. 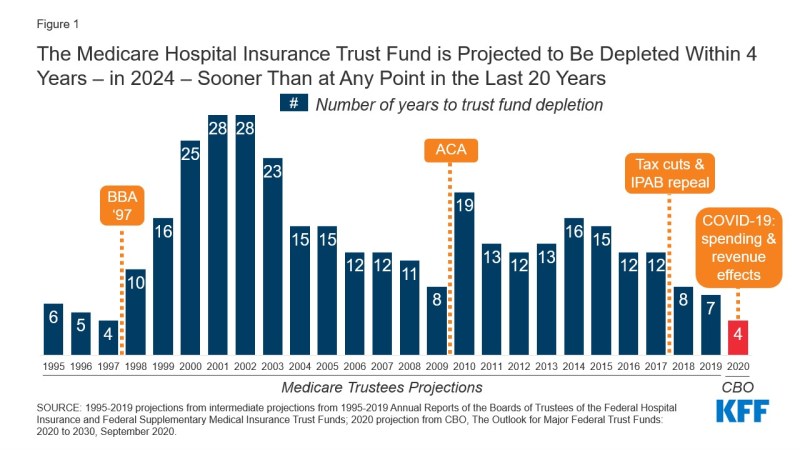 Figure 1: The Medicare Hospital Insurance Trust Fund is Projected to Be Depleted Within 4 Years – in 2024 – Sooner Than at Any Point in the Last 20 Years​

Funded primarily by payroll tax revenues, the HI trust fund pays for Medicare beneficiaries’ inpatient hospital, skilled nursing facility, home health, and hospice services, and covers a portion of Medicare payments to insurers that offer Medicare Advantage plans. If Part A spending exceeds income and the trust fund balance is fully depleted, Medicare will not have sufficient funds to pay all Part A benefits for the full year – a situation that has not occurred since the program was enacted in 1965. Based on CBO’s estimates of income, spending, and trust fund reserves, available funds will cover about 95% of Medicare Part A spending in 2024, but after 2024, this percentage drops to about 80% each year through the end of the decade. There is no automatic mechanism in place to fill this shortfall.

Normally, we rely on the Medicare Trustees’ annual report to gauge trust fund solvency, but the projections in this year’s Trustees’ report released in April of 2020 did not incorporate the spending or revenue effects of COVID-19. CBO incorporated more current information in its September report to reflect the economic impact of COVID-19, and modified its prior projection to advance the depletion date from 2026 to 2024. While CBO and the Medicare Trustees haven’t always projected the same depletion date, they have matched in recent years.

According to CBO, the earlier depletion date reflects lower payroll tax revenue caused by the “recent economic disruption” from COVID-19. The drop in payroll tax revenues is due to widespread layoffs, furloughs, business closures, a shift from full-time to part-time work for many workers, and salary cuts. Since payroll taxes are the primary source of revenues to the HI trust fund, this is an especially critical component of Medicare solvency.

COVID-19’s impact on Medicare’s finances comes on top of legislative changes passed by Congress and signed by President Trump that were projected by the Medicare Trustees to weaken trust fund solvency – even in the midst of a healthy economy and low unemployment prior to the pandemic:

Even before the pandemic, policymakers were already facing tough decisions about how to bolster the Medicare HI trust fund. Now these decisions will need to be made sooner and could be a lot tougher. Pulling either of the two obvious policy levers – decreasing Part A spending through payment or benefit reductions or increasing payroll tax revenues – would face strong political opposition in any environment, but especially so in the current one. But some action will be needed, soon, to fully meet Medicare’s obligations to the millions of seniors and people with disabilities who rely on it.