Most Americans in prime working age who aren’t currently employed hope to return to work in the future, though family responsibilities, health issues and a lack of good jobs pose significant challenges, finds a new survey conducted by the Kaiser Family Foundation, The New York Times and CBS News.

Rather than focusing only on those who meet the official government definition of unemployment, this survey takes a broad look at all adults of prime working age (25-54) who are not working, regardless of their desire for work or job-seeking activities. Conducted to shed light on recent trends in the nation’s employment market, the survey probes why they are not working, how they get by financially, what it would take to get them working, and – for those who used to work – how being out of work has changed their lives. Each news organization plans a series of reports drawing on the survey’s findings, beginning with a segment last night on the CBS Evening News and a story this morning in The New York Times. 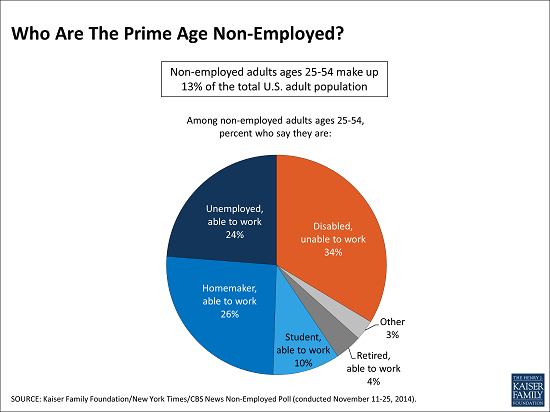 The survey’s findings include: 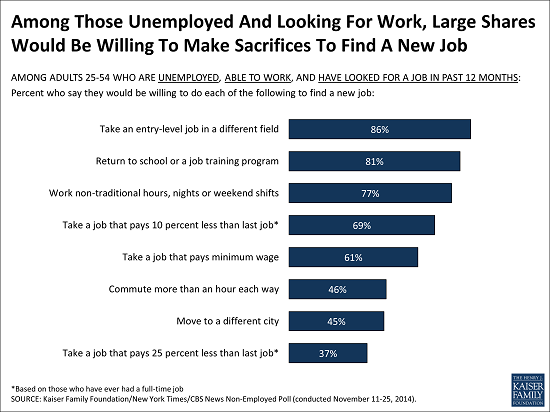 An overview and full survey results are available on the Foundation’s website.

The survey was designed and analyzed by public opinion researchers at the Foundation, the Times, and CBS News, and was conducted from November 11-25 among a nationally representative random digit dial telephone sample of 1,002 adults between the ages of 25-54 who are not employed either full-time or part-time. Telephone interviews conducted by landline and cell phone were carried out in English and Spanish. The margin of sampling error is plus or minus 4 percentage points for results based on the full sample; for subgroups the margin of sampling error is higher.