Among the 1.9 million nonelderly adults with opioid addiction, those with Medicaid were twice as likely as those with private insurance or no insurance to have received treatment in 2016, according to a new analysis by the Kaiser Family Foundation.

The role of Medicaid in combating the opioid epidemic has received renewed attention lately as the Trump Administration has declared addressing the epidemic a key priority and states have sought additional federal help. Forty-three percent of nonelderly adults with opioid addiction who were covered by Medicaid received inpatient and/or outpatient opioid addiction treatment services in 2016, compared with 21 percent of those with private insurance and 23 percent of those who were uninsured, based on analysis of data from the National Survey on Drug Use and Health. 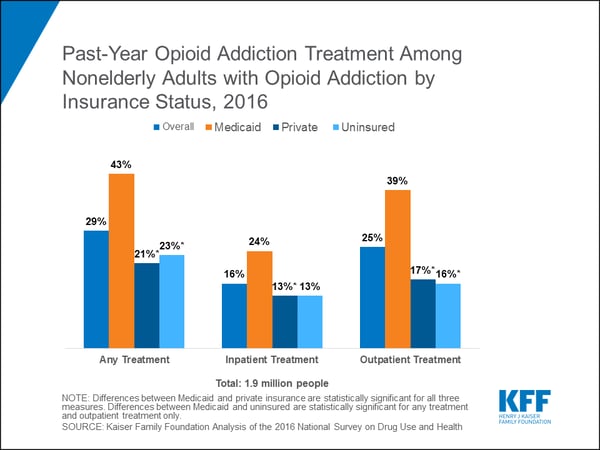 Of the 1.9 million nonelderly adults with an opioid addiction in 2016, Medicaid covered nearly 4 in 10 (38%), in part through Medicaid expansion in 33 states. It provides access to a range of treatment services, including medication-assisted treatment, which combines medication with counseling and other support services. Opioid addiction treatment can be delivered in an inpatient or outpatient setting and can be provided in numerous types of facilities, including hospitals, drug or alcohol rehabilitation facilities, mental health centers, or private doctors’ offices.