The Role of Community Health Centers in Addressing the Opioid Epidemic

Health centers play a critical role in addressing the opioid epidemic and many rely on Medicaid, especially in expansion states, to increase their ability to respond to the crisis.

Community health centers are on the front lines of addressing the opioid epidemic, which affected two million Americans and resulted in 42,249 opioid overdose deaths in 2016.1 Health centers are located in medically underserved rural and urban areas, where the impact of the opioid epidemic has been especially devastating. As providers of comprehensive primary care services, they are increasingly meeting the treatment needs of their patients with substance use disorders (SUD), including those with OUD. The share of health centers providing SUD services has risen. In 2016, 388 (28%) health centers provided these services, which was a substantial increase from 20 percent in 2010.2 Health centers also remove affordability barriers to accessing needed treatment services, particularly for people with OUD who are more likely to have low incomes compared to the general population and are disproportionately covered by Medicaid or are uninsured.3 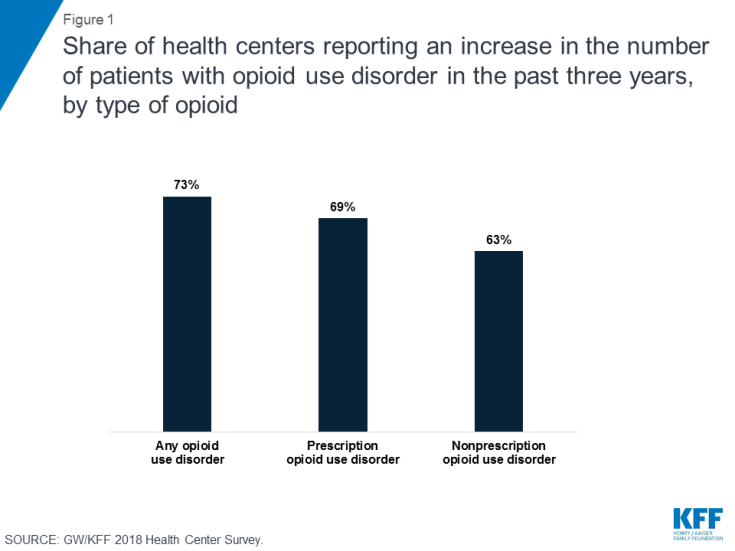 Figure 1: Share of health centers reporting an increase in the number of patients with opioid use disorder in the past three years, by type of opioid

Provision of on-site SUD services at health centers has increased considerably in recent years. As the opioid epidemic has intensified, health centers have responded by adding or expanding SUD services. SUD services are defined in the Uniform Data System (UDS) as those that are provided by SUD workers, including “psychiatric nurses, psychiatric social workers, mental health nurses, clinical psychologists, clinical social workers, family therapists and other individuals providing alcohol or drug use disorder counseling and/or treatment services.”6 From 2010 to 2016, the number of full-time equivalent (FTE) health center staff providing SUD services increased 36 percent from 854 to 1,163, and the number of patients receiving these services increased 43 percent from 98,760 to 141,569.7

It should be noted, however, that these numbers likely underestimate the true magnitude of on-site SUD service provision at health centers. The UDS does not include SUD services provided by physicians and advanced practice clinicians in these totals, and instead codes them as medical visits.8 Additionally, some health centers may also classify visits for both mental health and SUD services as “mental health visits” for purposes of UDS reporting. 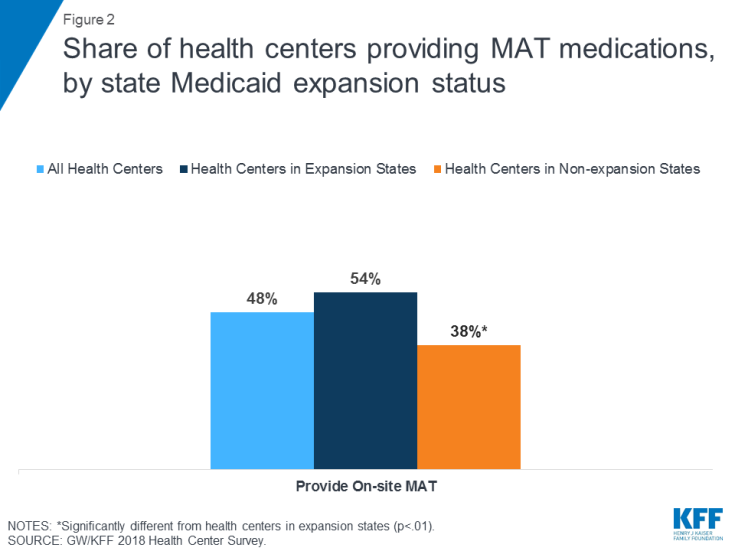 Most health centers that provide MAT services provide more than one medication. Among health centers that provide MAT services, roughly one in 10 (11%) offer all three MAT medications–methadone, buprenorphine, and naltrexone (oral and/or injectable). Over half (54%) offer two MAT drugs, while roughly a third (35%) offer only one drug (Figure 3).  Buprenorphine is the most widely available MAT drug, with 87 percent of health centers that provide MAT medications reporting they provide it. Slightly smaller shares report providing oral naltrexone (68%) or injectable naltrexone (63%), while fewer than one in five (16%) provide methadone (Figure 3). Facilities must be certified as opioid treatment programs in order to dispense methadone, while buprenorphine and naltrexone can be prescribed in any setting.11 Additionally, all state Medicaid programs cover buprenorphine12 and almost all (49) cover naltrexone,13 while only 36 state programs cover methadone.14 As part of a broader initiative to combat the opioid epidemic, the Trump administration included a proposal to require states to cover all three MAT drugs, although it has not yet been implemented.15 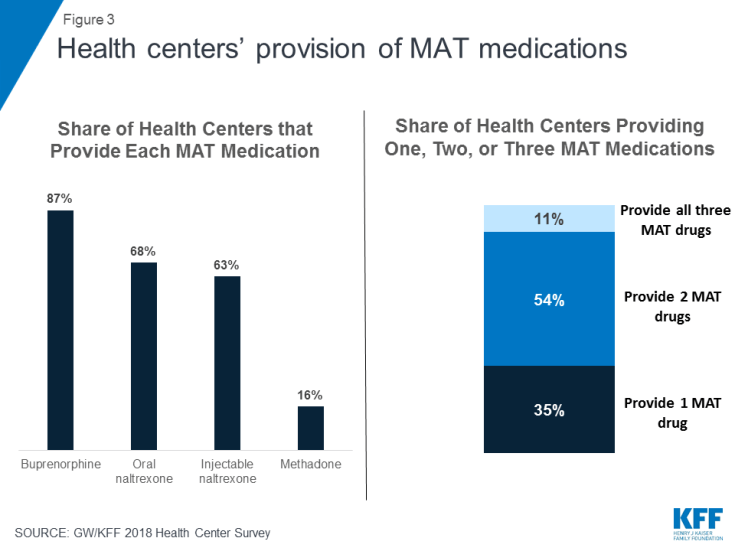 As the opioid epidemic has worsened, health centers have increased access to buprenorphine to treat OUD. Over seven in ten health centers that provide MAT have increased the number of providers who are able to prescribe buprenorphine in the past year (Figure 4). Because buprenorphine is a partial opioid agonist, providers must obtain a Drug Abuse Treatment Act of 2000 (DATA) waiver from the federal government and complete additional training requirements in order to prescribe it.16 In 2016, health centers reported 1,700 on-site or contracted physicians with a data waiver and 39,075 patients who received MAT from a physician with a DATA waiver.17 Previously, only physicians could obtain a DATA waiver, but the Comprehensive Addiction and Recovery Act (CARA), enacted in 2016, enables physician assistants and nurse practitioners to obtain waivers as well.18 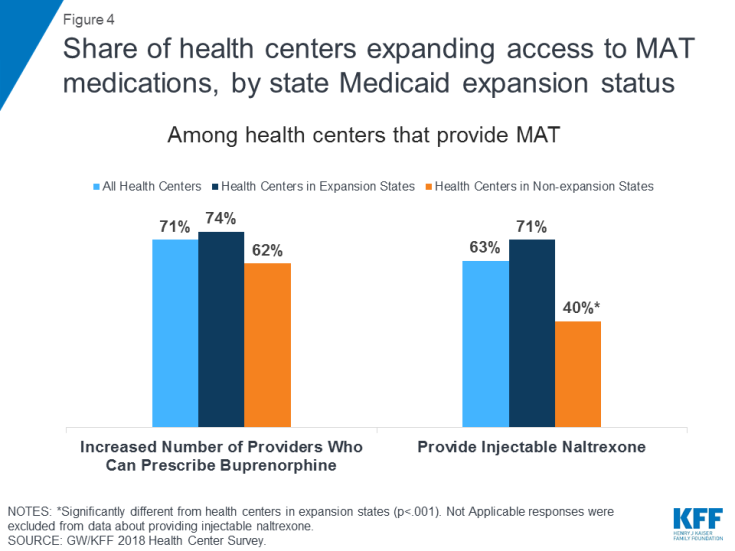 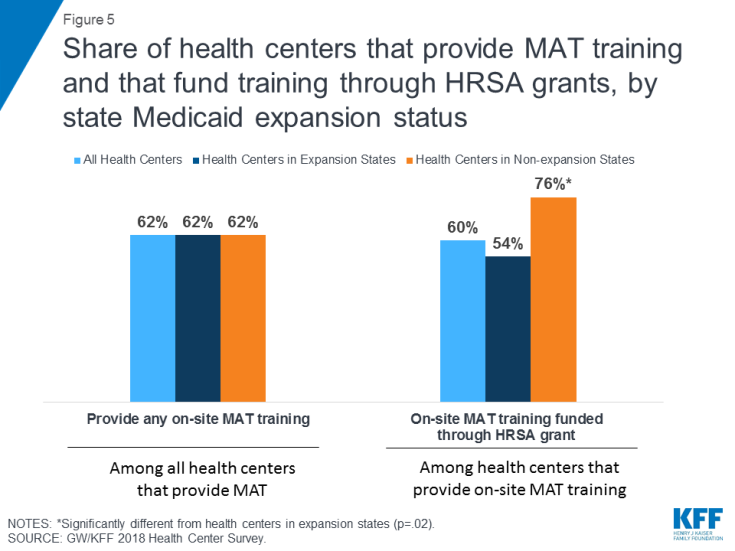 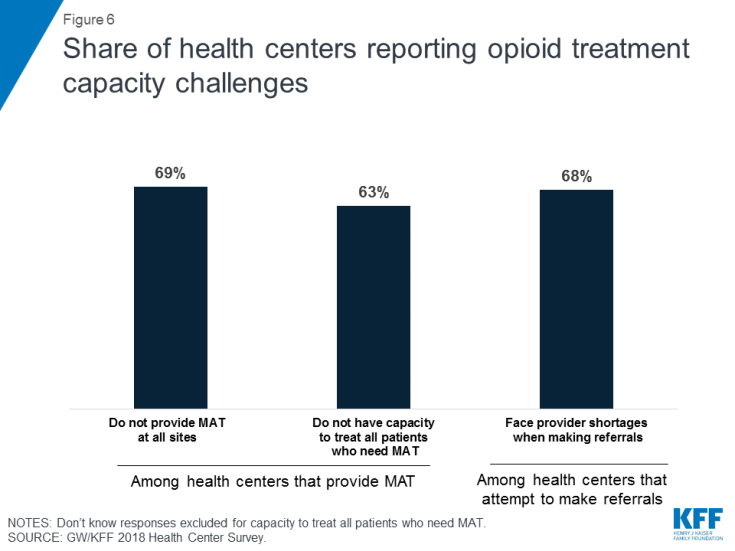 To support the expansion of SUD treatment services, including services to treat OUD, the Health Resources and Services Administration (HRSA) has provided additional funding to health centers. HRSA awarded $94 million to 271 health centers in 45 states and DC in March 2016 and an additional $200 million to 1,178 health centers in all 50 states and DC in September 2017.25,26 These grants funded additional staff, services, and provider training. More recently, in June 2018, HRSA announced the availability of $350 million in supplemental grant funding (including $200 million in one-time grants) to enable health centers to continue to strengthen their services, using a comprehensive, team-centered approach to care.27

Many health centers distribute naloxone, a drug that reverses the effects of an overdose, and benefit from pharmacy benefit management (PBM) strategies to increase access to naloxone. Overall, four in 10 health centers reported distributing naloxone and health centers in expansion states were almost twice as likely as those in non-expansion states to do so (47% vs. 26%) (Figure 7). Among health centers in states that were hit hard by the opioid epidemic, those in expansion states were also significantly more likely to distribute naloxone (51% vs. 32%) (Appendix Table 1). With dramatic increases in opioid overdose deaths in recent years, naloxone has become a critical tool in minimizing fatalities due to the opioid epidemic.28 Most state Medicaid programs have PBM strategies in place to increase access to naloxone for enrollees, such as making some formulations of naloxone available without prior authorization or allowing family or friends to obtain naloxone prescriptions on a Medicaid enrollee’s behalf. Medicaid programs in expansion states are more likely than those in non-expansion states to cover the atomizer for the nasal spray (53% vs. 16%) and the auto-injector (28% vs. 5%) without prior authorization (Table 1).29 They are also more than twice as likely (25% vs. 11%) to cover naloxone for family or friends of an enrollee.30 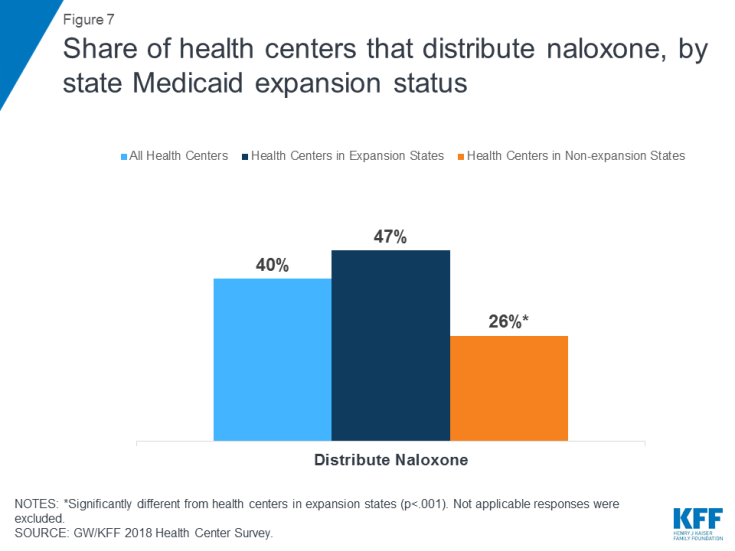 Most health centers have made efforts to make prescribing practices safer. Nearly nine in ten (87%) health centers reported having written policies and procedures regarding the use of prescription drug monitoring programs (PDMP) before writing prescriptions for opioids. PDMPs are electronic databases that enable providers to track controlled substance prescriptions for patients in their state in order to prevent overprescribing to an individual patient.31 Because of their complex health needs, many Medicaid enrollees and other health center patients may be more likely than the general population to need prescription opioids to treat pain. The large share of health centers with policies and procedures regarding the use of PDMPs helps to maximize the likelihood that patients are receiving prescription opioids only when medically necessarily.

As the primary source of health care for many low-income Americans, health centers play a critical role in addressing the opioid epidemic, through prevention, treatment, overdose reversal, and safe prescribing practices. The majority of health centers reported an increase in the share of patients with an OUD, and nearly half provide on-site MAT. Many health centers also distribute naloxone for opioid overdose reversal and prioritize the use of PDMPs. Because of enhanced federal funding from Medicaid expansion, as well as the broad coverage of treatment services through Medicaid, health centers in expansion states appear to be better equipped to address the opioid epidemic. Compared to health centers in non-expansion states, those in expansion states are more likely to provide on-site MAT, and to distribute naloxone.

As the opioid epidemic continues to escalate, health centers will face ongoing challenges in meeting the demand for OUD treatment. Grant funding plays an important but somewhat limited role in this regard. One-time grants can bolster existing services and support service expansions, but the funding per health center grantee is often modest. Health centers rely heavily on Medicaid as an ongoing revenue source in order to continue to meet patients’ needs. Given Medicaid’s role in supporting efforts to expand access to treatment and overdose prevention, decisions by more states to expand Medicaid coverage could increase health centers’ capacity to address the epidemic and to provide long-term recovery support to patients.

Because Medicaid is so important to health centers’ ability to build sustainable treatment and recovery programs, states’ efforts to use Section 1115 waivers to impose work or community engagement, premium, and drug testing requirements for Medicaid enrollees bear close watching. Such demonstrations could create barriers to Medicaid coverage for health center patients with OUD. Even in the case of demonstrations that exempt people receiving SUD treatment, states have not yet defined the concept of active treatment, which could exclude important long-term recovery care. Health centers rely heavily on Medicaid revenue and if patients lose their Medicaid coverage, health centers could be limited in their ability to respond to the epidemic. Additionally, work, premium, and drug testing requirements would create administrative burdens for health centers as they help their patients navigate these requirements, which could interfere with their capacity to provide comprehensive care.