The 2014 Affordable Care Act (ACA) health coverage expansions provide millions of uninsured Americans a new coverage option through Medicaid or Health Insurance Marketplaces. However, effective outreach, enrollment, and retention efforts are essential for ensuring that these new coverage opportunities translate into increased coverage. Past Medicaid and CHIP experience demonstrates that a combination of broad and targeted outreach and enrollment approaches are key to reaching and enrolling eligible people, particularly hard-to-reach individuals.1 The Kaiser Commission on Medicaid and the Uninsured has previously examined a number of innovative strategies that may provide lessons for outreach and enrollment under the ACA, including providing one-on-one enrollment assistance through community health centers in Utah and using technology-based reminders to facilitate renewals of coverage in Michigan.2,3 Another potential avenue for targeted outreach is through text messaging and other mobile technology, which has become an increasingly common source of communication, particularly among low-income adults targeted by the coverage expansions. To provide greater insight into the potential role of text messaging as an outreach vehicle, this brief focuses on the use of standard cell phones and smartphones for text messages and Internet access and illustrates how one text messaging initiative, Text4baby, a free, personalized maternal child health education text messaging service for pregnant women and new mothers, is helping eligible pregnant women and their families connect to health coverage.

Use of Mobile Technology

Mobile technology includes a growing array of handheld or portable electronic devices such as cell phones, smartphones, and tablets. Adults are using these devices more frequently for a number of activities including text messaging, accessing the Internet, and conducting other Web-based activities such as online banking and accessing social media through applications.4 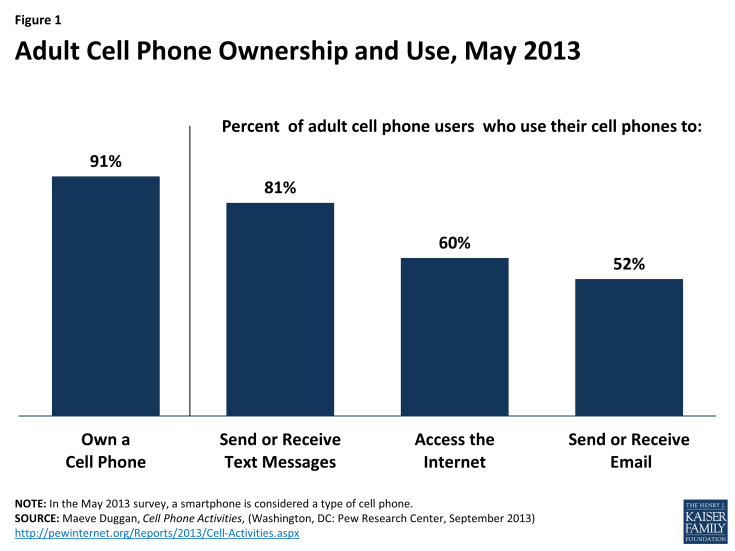 Figure 1: Adult Cell Phone Ownership and Use, May 2013 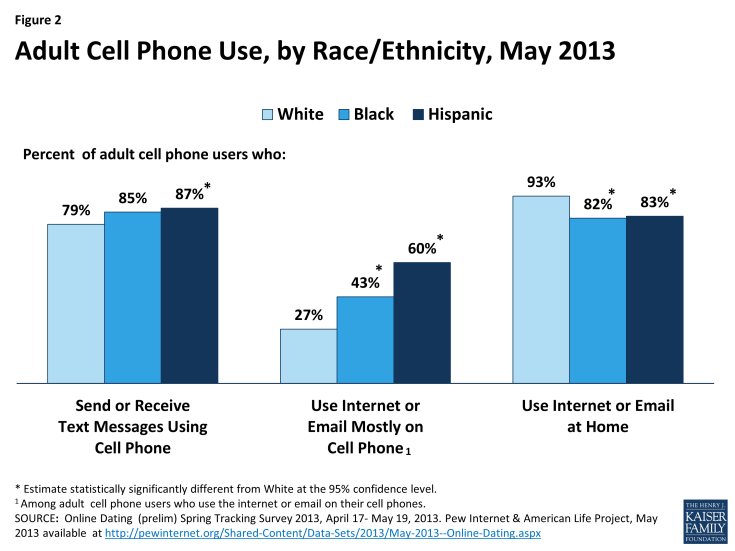 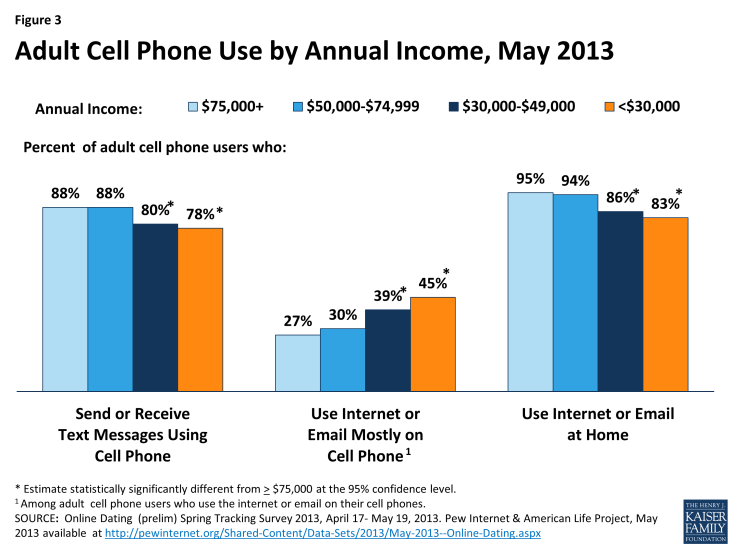 Figure 3: Adult Cell Phone Use by Annual Income, May 2013

Using Text Messaging as an Outreach and Enrollment Tool: The Text4Baby Example

There has been growing interest in using text messaging and mobile technology in health care. For example, a number of insurance companies have developed mobile applications that allow beneficiaries to search for physicians or facilities, view and share member health plan information, or contact a provider about a health care need.10 Researchers have also noted the potential value of cell phones and other mobile technology as a means to improve patient compliance through text message reminders and to help patients communicate with their clinicians and track and manage chronic conditions.11 Some initiatives are also exploring the use of text messaging to reach and enroll more people in health coverage. For example, as highlighted in a previous outreach and enrollment strategy profile, the Michigan Primary Care Association achieved success increasing retention through an innovative text messaging strategy that reminds Medicaid and CHIP enrollees about the need to renew Medicaid coverage and offer renewal assistance to families.12 Similarly, the National Alliance for Hispanic Health launched a text messaging service called the Buena Salud Club to provide free, bilingual health and health coverage information to Hispanic consumers through text messaging. 13  Beginning in 2012, Text4baby, a personalized maternal and child health program, also launched a text messaging outreach and enrollment campaign to connect more pregnant women and their families to Medicaid and CHIP. Early experiences from this initiative are discussed further below.

Text4baby is a free, personalized maternal child health education program that uses text messaging to provide health and safety information and support to pregnant women and new mothers. The program is a public-private partnership that conducts outreach through  over 1,100 promotional members including federal agencies, state and local health departments, Medicaid agencies, health plans, hospital networks, and the media.14 Since Text4baby launched in in February 2010, nearly 680,000 pregnant women and new mothers have enrolled in the program.15 External studies of Text4baby also suggest that it has been effective in reaching its target audience of individuals from underrepresented groups and people of lower economic statuses.16  Women who enroll in the program receive three free text messages a week, timed to their due date or their baby’s birth date, through pregnancy and up until the baby’s first birthday. Messages cover a range of health and safety topics. Recently, Text4baby incorporated use of a series of text messages, referred to as the “Medicaid module,” which were designed to increase enrollment of uninsured pregnant women and their families into Medicaid and CHIP.

Text4Baby and the Medicaid Module

In February 2012, Text4baby partnered with the Connecting Kids to Coverage initiative of the Centers for Medicare and Medicaid Services to drive enrollment in Medicaid and CHIP through a series of interactive text messages. As part of this “Medicaid module,” three days after enrolling in Text4baby, individuals are asked about their type of health coverage. Those who respond with Medicaid or CHIP are then texted a supportive message and information on how to renew their coverage. Those who are uninsured are texted information about Medicaid and CHIP eligibility and how to enroll. They also receive a follow-up text seven days later asking if they applied for coverage (Figure 4). Women who respond they are enrolled in Medicaid or CHIP or applied for Medicaid or CHIP are reminded to renew their coverage. Nearly half (47%) of the over 110,000 women who enrolled in Text4baby between the end of December 2012 and August 2013 responded to the first question of the Medicaid module, and about 13 percent of these women reported they were uninsured.17 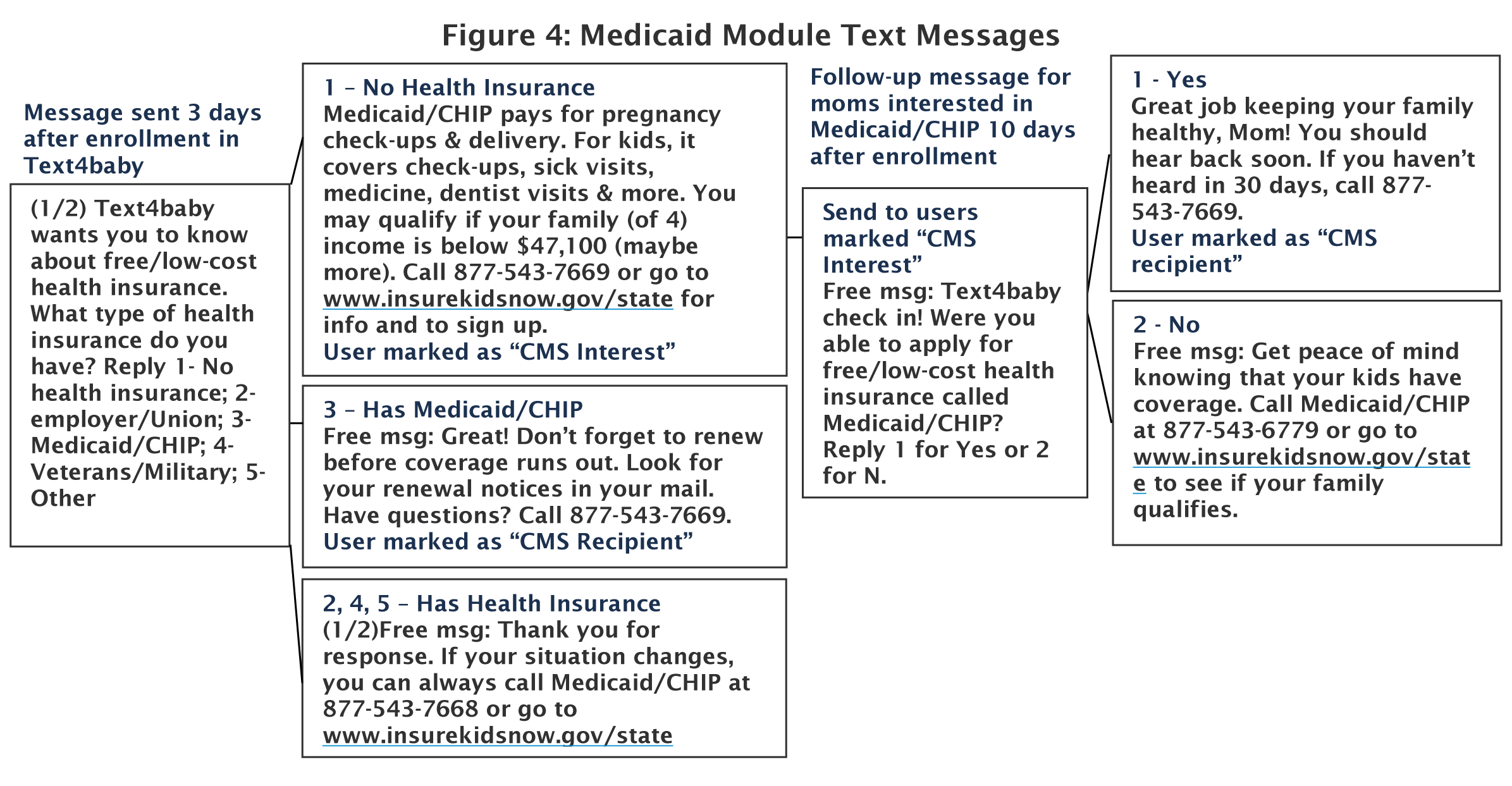 Experiences with the Text4baby Medicaid Module

In late summer 2013, the Kaiser Commission on Medicaid and the Uninsured and PerryUndem Research and Associates conducted structured telephone interviews with 43 women enrolled in Text4baby to take a qualitative look at the impact of the Medicaid module. All interview respondents were uninsured themselves or had at least one uninsured child when they enrolled in Text4baby and recalled receiving the text messages in the Medicaid module. The interviews were conducted in English and Spanish. Key findings are discussed below:

Text4baby respondents included young, low- and moderate-income women with diverse racial and ethnic backgrounds.  Nearly all respondents were between ages 18 and 35 years old, with many between 18 and 24 years old. Respondents included both those who already had children in the home and those who did not yet have any children in the household. They also included women of diverse racial and ethnic backgrounds and immigration statuses, with a number speaking a language other than English in the home. Almost all respondents reported having household income of less than $40,000, with a number reporting income below $20,000 per year.

Many respondents said they sought out additional information about Medicaid and CHIP after receiving Text4baby’s messages about health coverage. Some visited the Insure Kids Now website through their phone or computer or called the Insure Kids Now toll free number. Some tried to learn more about coverage by talking to a health care provider, family and friends, someone from Medicaid, CHIP, or another government office, or a trusted individual in their community.

With the continued rise in the use of mobile technology across the population, including lower-income and diverse groups, text messaging can serve as a useful vehicle to reach and communicate with uninsured individuals. Experience with the Text4baby Medicaid module shows that individuals found text messages about health insurance to be useful and that the messages helped spur them to seek out additional information about health coverage and apply for coverage. Looking ahead, as outreach and enrollment efforts for the ACA coverage expansions continue, these findings suggest that text messaging could be an effective outreach and education tool. Other experience suggests that text messaging may also be an effective tool to facilitate renewals of Medicaid and CHIP coverage. Given that some individuals primarily rely on cell phones to connect to the Internet, it may be useful to explore options that would enable individuals to apply for and renew health coverage directly through their phone. Overall, with the continued rise of use of mobile technology, it will be important to continue to explore its potential uses in enrolling and maintaining health coverage.

This issue brief is part of a Kaiser Commission on Medicaid and the Uninsured series of profiles on Medicaid and CHIP Outreach and Enrollment Strategies. The authors would like to extend their appreciation to Text4baby for providing data used in this report.