Proponents of Medicaid work requirements often describe these policies as applying to “able-bodied” adults. Recent guidance from the Centers for Medicare and Medicaid Services (CMS), allowing states for the first time  to condition Medicaid eligibility on meeting a work requirement, permits states to target only people who are “eligible on a basis other than disability.” Kentucky’s waiver, the first to include a work requirement (referred to as community engagement),1 applies to Medicaid expansion adults and traditional adults, including low-income parents. As of mid-January, 2018, nine other states have submitted waiver proposals to CMS seeking work requirements (AR, AZ, IN, KS, ME, MS, NH, UT, and WI).

How Many Medicaid Adults Have a Disability?

Three in 10 nonelderly adults with Medicaid report having a disability, according to data from the American Community Survey (ACS) (Figure 1).  The ACS classifies a person as having a disability if the person reports serious difficulty with hearing, vision, cognitive functioning (concentrating, remembering, or making decisions), mobility (walking or climbing stairs), self-care (dressing or bathing), or independent living (doing errands, such as visiting a doctor’s office or shopping, alone).2 The ACS definition of disability is intended to capture whether a person has a functional limitation that results in a participation limitation and is similar to measures used in other federal surveys, such as the National Health Interview Survey. 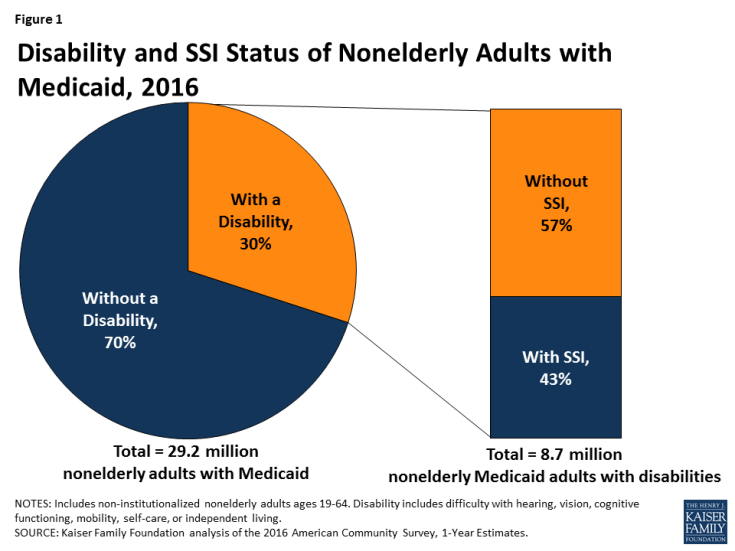 Figure 1: Disability and SSI Status of Nonelderly Adults with Medicaid, 2016 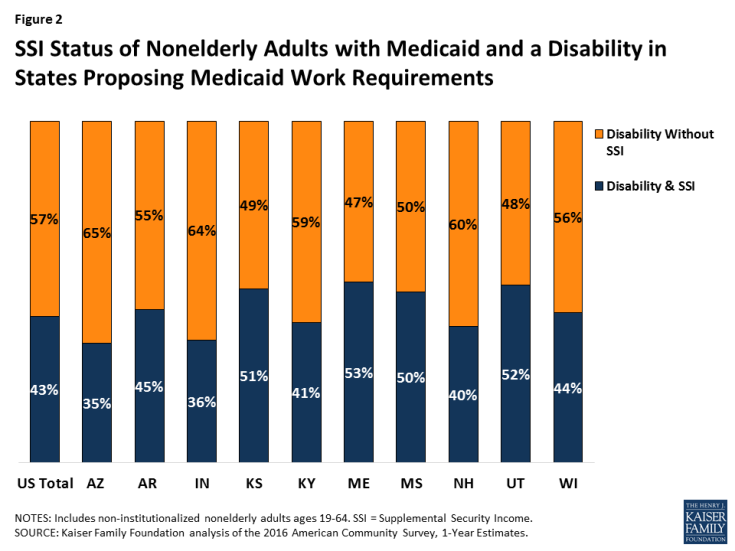 How Many Medicaid Adults with Disabilities are Working? 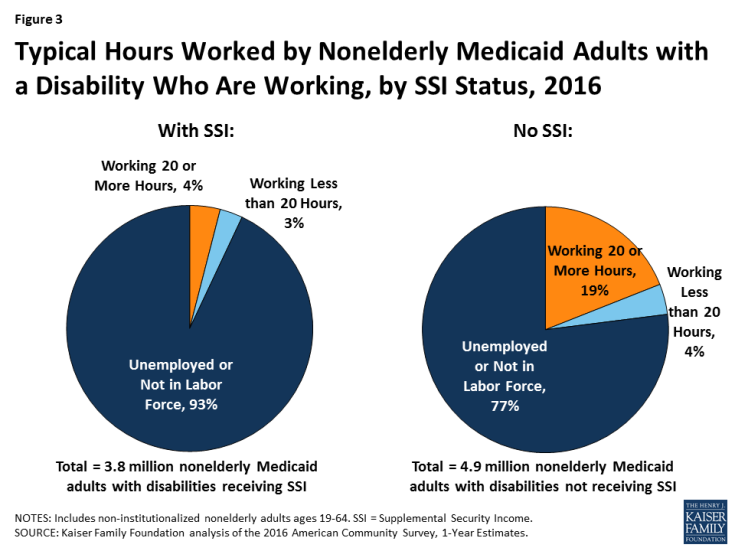 Figure 3: Typical Hours Worked by Nonelderly Medicaid Adults with a Disability Who Are Working, by SSI Status, 2016 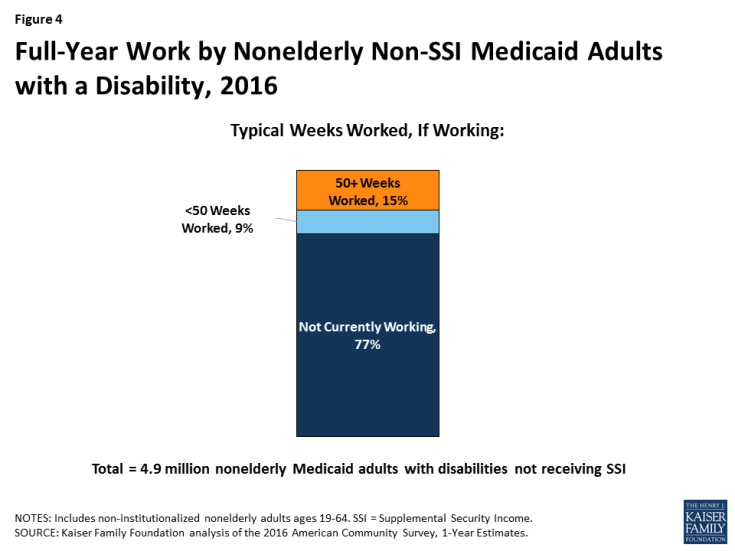 Over three-quarters (77%) of non-SSI adults with disabilities are not in the workforce (77%) (not working or unemployed but looking for work) (Figure 3).  Their absence from the workforce is likely at least in part due to the serious functional difficulties they report in areas such as cognitive functioning, mobility, self-care, and independent living, as described above.

What are the Characteristics of Medicaid Adults with Disabilities? 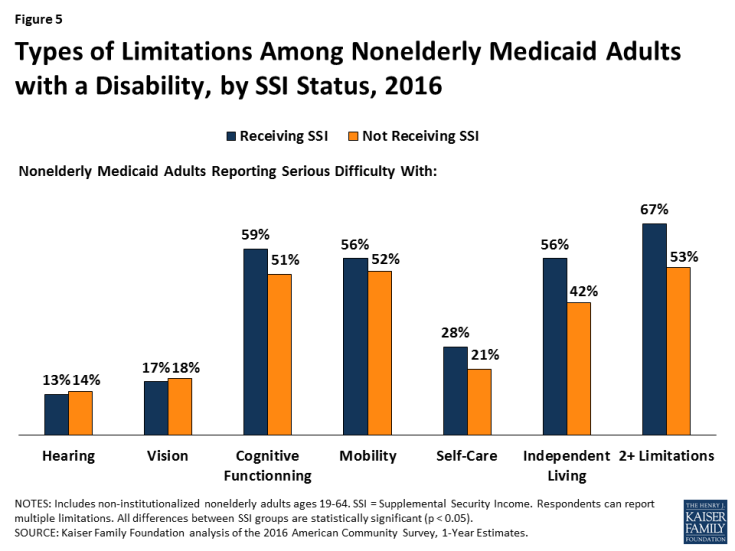 Figure 5: Types of Limitations Among Nonelderly Medicaid Adults with a Disability, by SSI Status, 2016 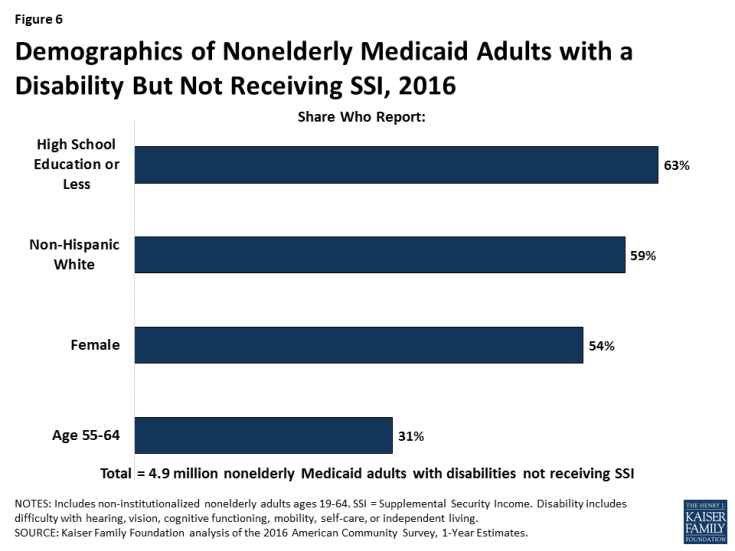 Figure 6: Demographics of Nonelderly Medicaid Adults with a Disability But Not Receiving SSI, 2016

If they are not exempted, waivers that condition Medicaid eligibility on meeting a work requirement could adversely impact people with disabilities who have limitations that interfere with their ability to work but do not rise to the stringent SSI level of disability. While Kentucky’s waiver does not apply to people who receive SSI or other people who are eligible for Medicaid “based on a disability,” 59 percent of nonelderly Medicaid adults with disabilities in Kentucky do not receive SSI; this share is 57 percent nationally and ranges from 47 percent to 65 percent in the nine states with pending work requirement waivers.

Kentucky’s waiver requires people who are determined to be “medically frail” to be exempt from the work requirement, but there is no detail about how that process will be administered or whether all people with serious functional difficulties that impede their ability to work will qualify for an exemption. People who are classified as “medically frail” also will be exempt from other waiver provisions that can result in the loss of coverage, including the six-month coverage lockouts for failure to pay premiums (for those above 100% FPL), failure to timely renew eligibility, and failure to timely report a change in circumstances that affects eligibility.5 Kentucky’s waiver also requires the state to provide exemptions or reasonable modifications to the work requirement and other program rules under the Americans with Disabilities Act (ADA), Section 504 of the Rehabilitation Act, and Section 1557 of the ACA to assist people with disabilities and prevent eligible people from losing coverage.