Medicaid and the Children’s Health Insurance Program (CHIP) are key sources of coverage for children, covering nearly four in ten children (39%) nationwide1 and 44% of children with special health care needs. Medicaid covered over 37 million children in FY2016.2 CHIP serves as an important complement to Medicaid. In FY2016, it covered about 9 million children in families who earn too much to qualify for Medicaid but often lack access to affordable private coverage.3 States provide CHIP by creating a separate CHIP program, expanding Medicaid, or adopting a combination approach. All states have expanded eligibility for children through Medicaid and CHIP (Figure 1). New legislative authority is needed to continue CHIP funding beyond September 2017. If Congress does not extend CHIP funding, it is estimated that all states will exhaust their federal CHIP funds during FY2018.4 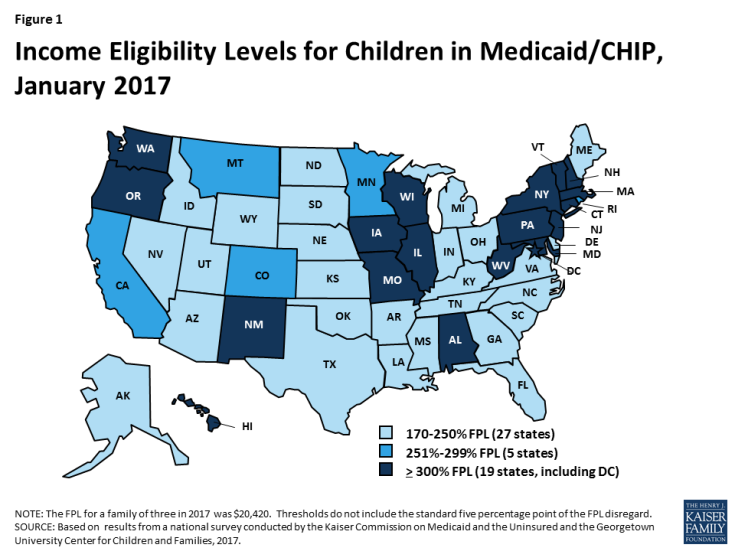 President Trump’s FY2018 proposed budget includes fundamental changes to Medicaid that would transition federal financing to a block grant or per capita cap for children and other groups, with reductions in federal funding of $610 billion. These changes are in addition to eliminating enhanced federal funding for the Affordable Care Act (ACA) Medicaid expansion to low-income adults. While the budget does not include many details, the provisions in the American Health Care Act (AHCA) would allow states to impose a block grant or per capita cap for children in Medicaid with requirements to cover mandatory children (under 100% of the federal poverty level (FPL) for school age children and under 133% FPL for children ages 0-5).  Under the block grant option, states could cap enrollment or impose waiting lists for children above minimum levels and would not be required to provide comprehensive benefits.

The proposed budget also would reduce federal funding under CHIP and cap the eligibility level for which states could receive federal funding for children’s coverage at 250% FPL. The budget proposes to extend CHIP funding for two years through FY2019. However, it proposes several changes to CHIP. It would eliminate the 23 percentage point increase in the federal match that was provided to states under the Affordable Care Act (ACA), which would reduce funding for states. It also would cap the eligibility level for which states could receive federal CHIP matching funds at 250% FPL. In addition, it would eliminate the maintenance of effort requirement that the ACA established to protect existing coverage gains for children. This provision requires states to keep Medicaid and CHIP eligibility levels at least as high as those they had in place at the time the ACA was enacted through September 30, 2019. Lastly, it would allow states to move children ages 6 to 18 with incomes between 100% and 133% FPL who were transitioned from CHIP to Medicaid under the ACA back to CHIP. These changes would result in net saving in CHIP of $5.8 billion over ten years.

Together, the proposed changes to Medicaid and CHIP would result in significant reductions in federal financing for children’s coverage. In response to these reductions, states will likely need to make program cutbacks, including reductions in eligibility and benefits. Such reductions would likely reverse the recent progress achieved in making affordable coverage available to working families and reducing the children’s uninsured rate to a record low of 5% (Figure 2). Coverage losses among children would lead to reduced access to care and other long-term negative effects for children and increase financial pressure on states and providers. 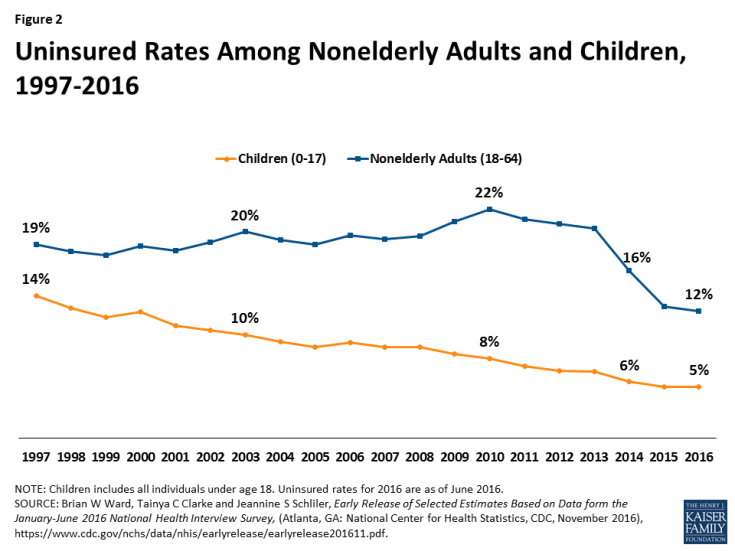