The Kaiser Health Policy News Index is designed to help journalists and policymakers understand which health policy-related news stories Americans are paying attention to, and what the public understands about health policy issues covered in the news. The latest Index finds that attention to health policy stories in August took a back seat to breaking national news such as the unrest in Ferguson, Missouri, international events in the West Bank, Syria and Ukraine and a global health story, the Ebola outbreak in West Africa. The only U.S. health policy news story that garnered a significant amount of public attention this month was the passage of a bill in Congress to overhaul the Veterans Affairs health system, closely followed by 51 percent. 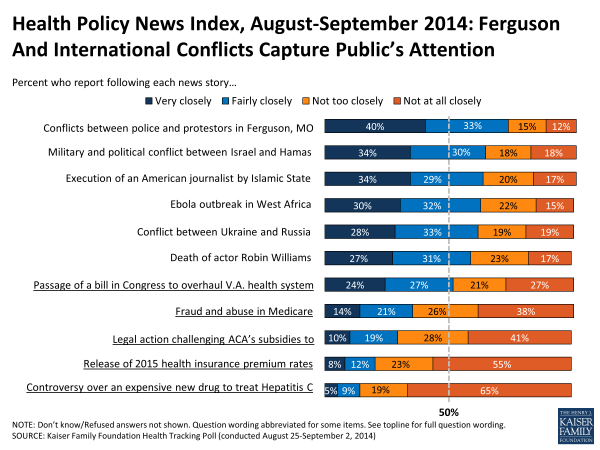 The latest Kaiser Health Policy News Index finds that health policy news took a back seat in public attention this month, as the public was more focused on news of conflicts both here in the U.S. and overseas. The most closely-followed story was the conflict between police and protestors in Ferguson, Missouri following the police shooting of Michael Brown, followed “very” or “fairly” closely by nearly three-quarters of the public (73 percent). Although the story captured the attention of a large majority of the public overall, Blacks (58 percent) were more likely than Whites (37 percent) and Hispanics (39 percent) to say they followed the events in Ferguson “very” closely. Somewhat smaller shares of the general public, about six in ten, report closely following several international stories, including the military and political conflict between Israel and Hamas (64 percent), the execution of an American journalist, James Foley, by Islamic State militants (63 percent)1, and the conflict between Ukraine and Russia (61 percent). Just as many Americans followed global health news of the Ebola outbreak in West Africa (62 percent). And back on the home front, nearly as many report following the death of actor Robin Williams (58 percent). 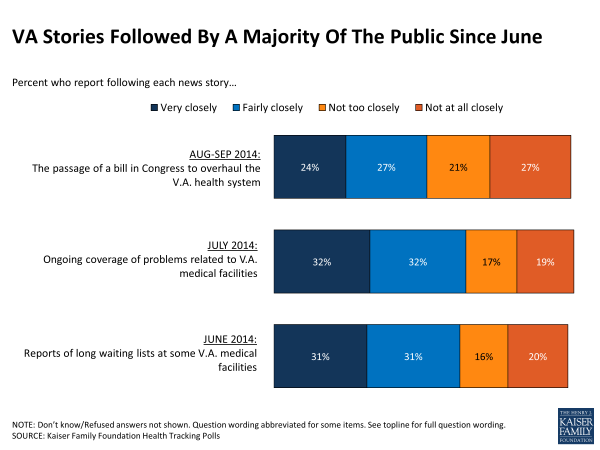 Other health policy stories fell to the bottom of the public’s radar this month. Just about a third (35 percent) say they followed news about fraud and abuse in Medicare, and fewer say they closely followed coverage of legal action challenging the health care law’s subsidies to help individuals buy insurance (29 percent), the release of 2015 health insurance premium rates by insurers in some states (20 percent), and controversy over, Sovaldi, an expensive new drug to treat hepatitis C (14 percent).