As the second round of open enrollment approaches, policy makers, journalists, insurers and enrollment groups may want to keep in mind what health insurance shoppers told us about their experiences during the first open enrollment period.  Two Kaiser Family Foundation surveys conducted last spring after the first open enrollment came to a close explored the shopping experience among two key groups impacted by the ACA: non-group health insurance purchasers1 and the previously uninsured in California2, the state with the largest number of uninsured in the country prior to the ACA.  This data note examines selected findings from each of these surveys that shed light on how people navigated the new options and choices available under the ACA during last fall’s open enrollment, with the hope of informing our understanding of individuals needs during this second open enrollment period.

Not Just A Website, Many Enrolled Via Other Means

In the fall of 2013, much media attention was paid to the problematic launch of the federal health insurance exchange website, Healthcare.gov. While many of the nation’s uninsured and non-group plan purchasers sought out information and plan options through online resources, including Healthcare.gov and state-based exchange websites, both surveys show that the internet was by no means the only way people shopped for, and purchased, health plans.  Nationally, throughout the shopping and enrollment process about two-thirds of people who reported buying coverage through the exchanges said they spent any time online, half said they spent time on the phone, and about 3 in 10 said they spent time in person with someone helping them. 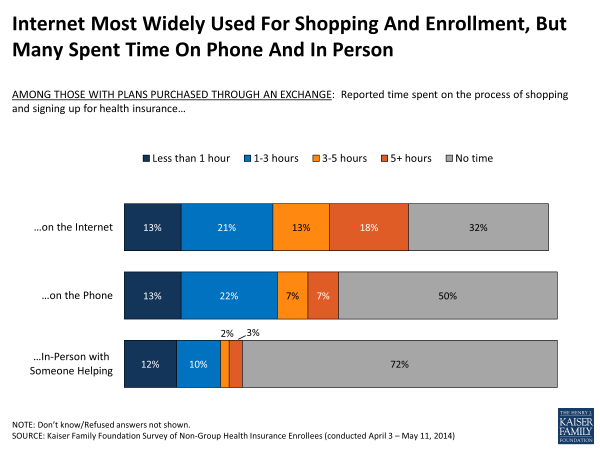 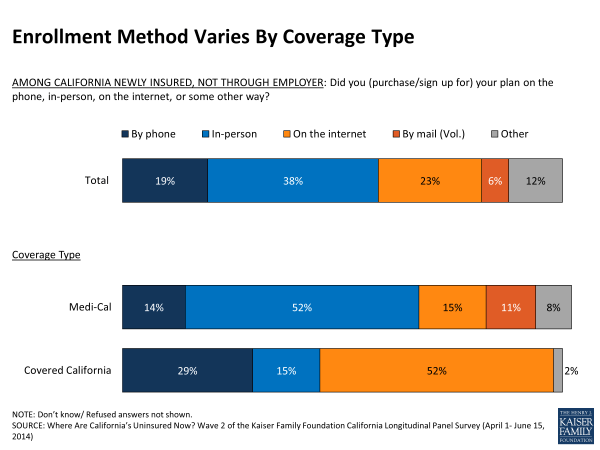 Enrollment With A Personal Touch

However it was they enrolled in a health plan, they didn’t often do it on their own.  Many people shopping for individual health insurance plans said they got help navigating the process, including nearly half of exchange purchasers nationwide and about six in ten of California’s newly insured.  In California, the largest share of newly insured Medi-Cal enrollees reported getting help from an enrollment or community health worker while most newly insured Covered California enrollees said they got help from an exchange representative or from family or friends.  Exchange purchasers nationwide were somewhat more likely than California’s previously uninsured to complete the process on their own – possibly related to their increased familiarity with health insurance enrollment processes; about four in ten previously had some form of insurance – although still about a quarter reported getting help from exchange representatives. 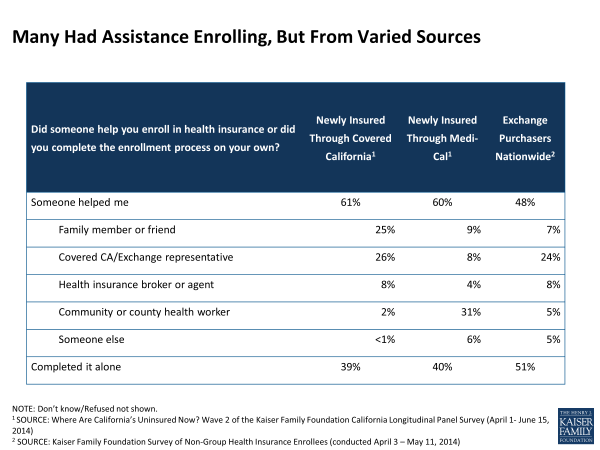 A majority of exchange purchasers nationwide said they found it at least somewhat easy to compare plans’ monthly premiums (69 percent) and copays and deductibles (64 percent), figure out if their income qualifies them for financial assistance (64 percent), set up an account with the health insurance marketplace (59 percent) and compare the providers covered by the plans (58 percent).  Still, roughly 3 in 10 exchange enrollees said each of these things was difficult.

Outreach efforts that directly reached individuals were an important factor in getting people enrolled in health insurance plans, with those previously uninsured Californians who said they were personally contacted through a phone call, email, text, or door-to-door visit being more likely to report getting health insurance by the end of open enrollment.  This factor remained a significant predictor of getting insurance even after accounting for other things that influenced whether someone was more or less likely to enroll. 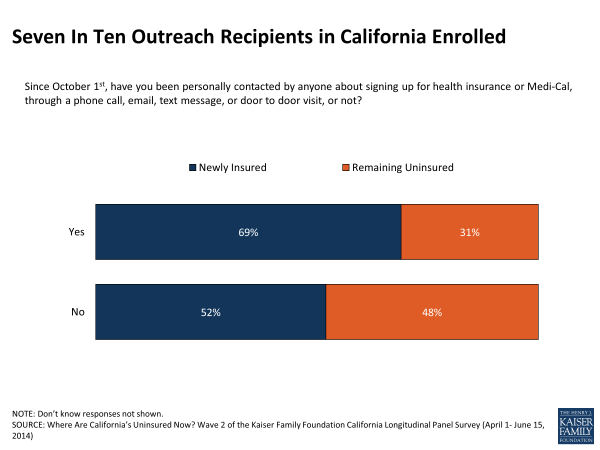 In choosing a health plan, non-group health insurance shoppers often faced a complicated field of choices and weighed a variety of factors in their health plan purchase, including the plan’s monthly premium, deductible and copayment, choice of doctors and hospitals, and the range of covered benefits, among other factors.  Among exchange purchasers who considered multiple plans, about eight in ten (79 percent) say the monthly premium was a “very” or “extremely” important factor in choosing their current plan over other choices available, and nearly three-quarters (73 percent) say the same about the plan’s copay and deductible. Somewhat fewer – though still sizeable shares– report placing a lot of importance on provider choice (63 percent) and covered benefits (62 percent), while far fewer say recommendations from friends or family were an important factor (26 percent). When asked to choose the MOST important factor, more cited premium costs than any other element as the single most important factor being considered. 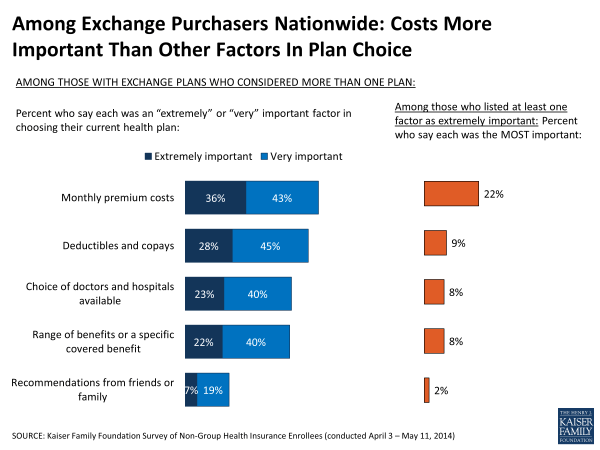 The three-quarters of those newly insured through Covered California who said they had a choice in plans echoed the priorities of exchange purchasers nation-wide, saying that cost was the main factor in choosing their current health plan. One third said the monthly premium cost was the most important factor and an additional one in five (22 percent) said the deductible was most important.

Those uninsured in California who tried to get health insurance reported a number of challenges and a majority of them said the process was difficult.  They reported having a difficult time finding health insurance information (58 percent), substantially more than the 19 percent of those who said they successfully enrolled in a health plan.  When shopping for a plan, California’s remaining uninsured who tried to get Medi-Cal or non-group coverage reported having a difficult time finding a plan that fit their needs (76 percent).  Those remaining uninsured in California who report attempting to get non-group coverage also say it was difficult to compare the services covered by health plans (71 percent), the amount they would pay for health services (69 percent), and the monthly premium (67 percent). 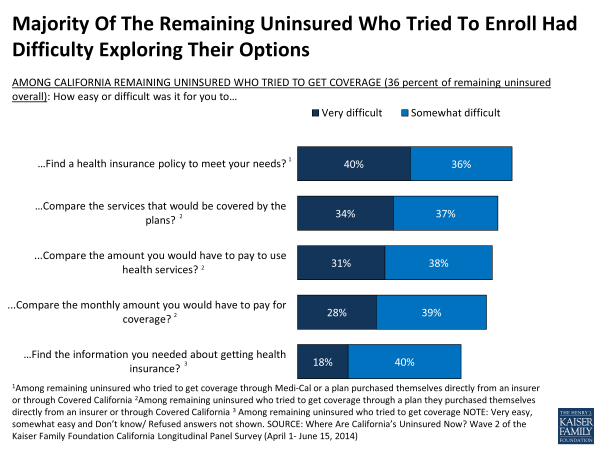 Even some people that did successfully enroll in a health plan expressed that certain aspects of the process were difficult.  About four in ten newly insured Covered California enrollees said they experienced difficulties in the overall process of signing up for health insurance.  Substantial shares of newly insured Covered California enrollees said it was at least somewhat difficult to compare services across plans (44 percent), find a plan that met their needs (38 percent), or find someone to answer their questions or help with enrollment (38 percent).  When it came time to get coverage confirmation, about four in ten said that it was difficult to get confirmation that their coverage had started from Covered California and about three in ten said it was difficult to confirm enrollment in Medi-Cal.

The results from these surveys conducted right after the first open enrollment period ended indicate the role outreach, personal assistance, and different avenues for enrollment can play during this next open enrollment.  Cost remains the primary consideration for enrollees, and while most found it easy to compare plans, there are still those who reported having problems with one or more parts of the shopping experience.  The difficulty reported by the remaining uninsured who tried to get coverage in finding assistance, health insurance information, and a plan that fits their needs will likely be areas of focus for those helping people to enroll across the country during this next  open enrollment period.