This fall a new rule takes effect requiring all private health plans to offer a uniform, simple to read, summary of benefits and coverage (SBC).  The SBC will provide consumers with standardized information about how plans cover essential health benefits and what coverage limits and cost sharing applies.

The SBC is one of the most popular provisions of the ACA.  Consumers often find health insurance difficult to understand and would no doubt welcome a plainly written explanation with illustrations of what plans do and don’t cover.  As health plan features become more varied and complex – for example, tiered formularies that vary cost sharing for different kinds of drugs, or the application of benefit-specific deductibles or coverage limits – consumers can find it difficult to compare plans, as well.

The SBC also will include coverage examples that estimate how much a plan would pay for illustrative care scenarios and how much the consumer might be left to pay for deductibles, co-pays, and non-covered services.  To derive coverage illustrations, insurers will show how their plans would cover standardized care scenarios developed by HHS with simulated claims for services that include billing codes and charges (based on Medicare payment levels.)

Eventually health plans will have to provide as many as six different illustrations, testing how policies cover more complex and expensive care scenarios, such as for treatment of cancer or a heart attack, which could involve many different types of benefits (e.g., hospitalization, surgical care, medical therapies and rehab services).  At the outset, though, insurers will be required to produce only two illustrations involving relatively simple care scenarios – maternity care for an uncomplicated pregnancy, and routine management of type-2 diabetes.  These scenarios include a few dozen claims each, with the dollar amount of care involved less than $10,000.

Insurers will simulate the processing of these claims, adding up what consumers would be left to pay for cost sharing and non-covered services.   What results is an estimated out-of-pocket cost number that consumers can use to compare different policies.

To assess the effect of the simplifying assumptions built into the calculator, we applied it to two plans offered to federal employees for which details are publicly available. Here are some examples of what we found (full results and details of the two plans are provided in tables below):

The calculator’s simplified assumptions make it easier for health plans to produce coverage illustrations, but they make them much less useful to consumers because they can mask the effect of plan differences that would lead to significant differences in cost -sharing for consumers.  To illustrate, simplified coverage features for diabetes benefits under two FEHBP plans were entered in the calculator and the resulting cost estimates for consumers were compared to estimates derived from a manual analysis of cost sharing and benefit limits rules under the same plans.  The simplified calculator underestimated patient cost sharing under both plans.  It also mis-estimated the difference in patient costs between the two plans – the calculator estimates signal that diabetes coverage under the GEHA Standard plan is more generous compared to the Blue Cross Standard plan (patients under GEHA would pay $430 less out-of-pocket than under Blue Cross Standard), while the manual analysis shows the Blue Cross plan coverage is more comprehensive for diabetes care (patients under Blue Cross would pay $400 less than under GEHA.)

Initial implementation of the SBC and coverage illustrations is just a first step of an important task to make health insurance more transparent and insurance markets more competitive.   Understandably, health plans would like to make this first step as simple and least costly as possible.  But over-simplifying the process can mask important plan differences for consumers and cloud transparency.

Key coverage features of two FEHBP plans are compared to services included in the Diabetes Coverage Illustration.  Results are summarized below: 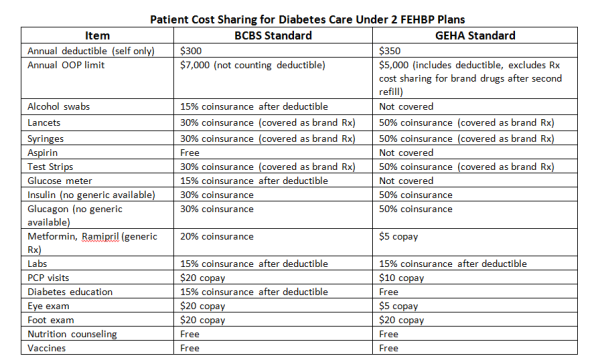 The coverage features of two plans were entered into the simplified calculator (to the extent possible), and also were applied manually to claims in the Diabetes Coverage Illustration.  Results of the two estimating methods are shown below: