As the debate over amending health insurance market rules continues, proponents of changing the law have proposed reducing the health benefits provided by non-group plans as a potential way to lower premiums in the market.  The Affordable Care Act (ACA) prescribes 10 categories of essential health benefits that non-group and small-group policies must cover, and provides in most cases that the scope of these benefits should be similar to those in employer group health plans, which cover most non-elderly Americans.  The American Health Care Act (AHCA), which passed the House of Representatives on May 5, would permit states to seek waivers to amend the required benefits if doing so would achieve one of several purposes, including lowering premiums.1  We look below at the benefits covered by non-group plans before the ACA as a possible indication of how states could respond to the waiver authority under the AHCA.

The lack of coverage for benefits such as maternity and mental health care in many nongroup plans, which was a frequent point of criticism when the ACA was debated, was one (but not the only) reason why non-group coverage was less expensive before the ACA was enacted.  In the pre-ACA market, certain benefits were excluded to make coverage more affordable and to guard against potential adverse selection by applicants with more predictable, chronic health care needs.  Even with the ability to medically screen applicants for non-group policies, some insurers excluded coverage for conditions such as mental health and substance abuse care unless states required that they be covered.

States determined coverage requirements for health insurance policies prior to the ACA.  A few states defined a standard benefit package to be offered by insurers in the nongroup market.  Most states adopted some mandates to cover or offer specific benefits or benefit categories – such as requirements for policies to cover maternity benefits or mental health treatments. In addition to deciding which categories of benefits must be included or offered, states might also specify a minimum level or scope of coverage; for example, a few states required that mental health benefits have similar cost sharing and limits as other outpatient services (sometimes called parity).

Pre-ACA non-group plans varied considerably in scope and comprehensiveness of coverage, with some plans limiting benefit categories or putting caps on benefits, while others offered more comprehensive options.  For example, some plans did not cover prescriptions, others covered only generic medications or covered a broader range of medications subject to an annual cap, while still others covered a more complete range of medications.  This diversity was possible because insurers generally were able to decline applicants with pre-existing conditions, and could require their existing customers to pass screening if they wanted to upgrade to more comprehensive benefits.  This prevented applicants from selecting the level of coverage they wanted based on their known health conditions, but also prevented many people from being able to obtain non-group coverage at all.

To look more closely at the benefits provided in pre-ACA non-group plans, we analyzed data submitted by insurers for display on HealthCare.gov for the last quarter of 2013.  Beginning in 2010, insurers submitted information about their non-group plans to be displayed on HealthCare.gov; the data includes information on benefits, coverage levels for each benefit, benefit limits, premiums and cost sharing parameters, and enrollment.  We focus here on the benefits and benefit limits.  We use data from 2013 because it is the most current year prior to when the ACA’s major insurance market changes went into effect, provides more benefit categories than some earlier years, and has more information about benefit limits for each category.  We note, however, that the ACA prohibition on annual dollar limits took effect shortly after enactment and was phased in between 2010 and 2013, so these types of limits would likely not be reflected often in data we received. This means that our analysis likely misses some of the limits (for example, dollar limits on prescriptions) that existed in nongroup policies before the ACA was enacted.  We limit the analysis to plans where insurers report enrollment in the product upon which the plan is based.  Our methods are described in more detail in the appendix. 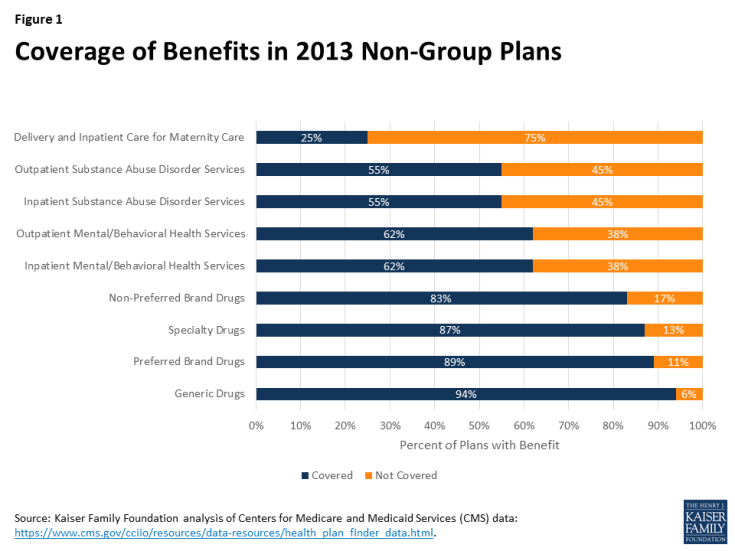 Even when coverage was provided, some policies had meaningful limits or restrictions for certain benefits.  Mental/behavioral health care is a case in point.  Among plans with coverage for outpatient mental/behavioral health services, 23% limited benefits for some or all mental/behavioral services to fewer than 30 visits or sessions over a defined period (often a year) and 12% limited it to 12 or fewer.  A small share (about 5%) of plans providing coverage for outpatient mental/behavioral health services provided benefits only for conditions defined as severe mental disorders or biologically-based illnesses or applied limits (such as visit limits) if the illness was not defined as severe or biologically based.  The definitions of these terms varied by state.3

Similarly, for plans covering outpatient substance abuse disorder services, 22% limited the benefit to fewer than 30 visits or sessions; 12% limited it to 12 or fewer. In many of these plans, visits for either mental health or substance abuse care were combined to apply toward the same limit.

Among the relatively few plans that provided coverage for delivery and inpatient maternity care, a small share (3%) applied separate deductibles of at least $5,000 for maternity services and some plans (6%) applied a separate waiting period of at least year before benefits were available.  A few plans restricted benefits to enrollees enrolled in family coverage or required that the enrollee’s spouse also be enrolled.

The ACA raised the range of benefits provided by non-group policies such that the benefits now offered by non-group plans are comparable to those offered in employer group plans.  The desire to lower non-group premiums, however, has led policymakers to consider allowing states to roll back the essential health benefits prescribed by the ACA.

Among the pre-ACA policies we reviewed, virtually all included benefits for certain services: hospital, physician, surgical, emergencies, imaging, and rehabilitation.  Other services were covered less often, including prescription drugs, mental/behavioral health care, substance abuse disorder care, and coverage for pregnancy and delivery.  This latter group of services all have some element of predictability or persistency that make them more subject to adverse selection. For example, many people use drug therapies over long periods and would be much more likely to select policies covering prescriptions than people who do not regularly use prescription drugs. If states were to drop any of these services from the list of essential health benefits for non-group plans, access to them could be significantly reduced.

The difficulty is that insurers would be very reluctant to offer some of these services unless they were required in all policies because people who need these benefits would disproportionately select policies covering them. In the pre-ACA market, insurers were able to offer products with different levels of benefits because they generally were able to control who could purchase them by medically screening new applicants.  Even existing customers faced medical screening if they wanted to change to a more comprehensive policy at renewal.  Through these practices, insurers were able to avoid the situation where people could choose cheaper policies when they were healthy and upgrade to better benefits when their health worsened. The proposed AHCA market rules, however, would not guard against this type of adverse selection, because people with pre-existing health conditions would be able to select any policy offered at a standard premium rate, and change their selection annually without incurring a penalty, as long as they maintained continuous coverage. This means that the range of benefits provided by insurers in states with essential health benefit waivers would likely be more limited than what insurers offered in the pre-ACA non-group market.  Benefit choice might be particularly limited in states that specify only a few benefits as essential.

It is hard to imagine that insurers would cover certain benefits if they were not required.  For example, some insurers before the ACA did not offer mental health benefits unless required by a state, even when they could medically screen all of the applicants.  And given the current problems with substance abuse in many communities, insurers would be reluctant to include coverage to treat them unless required. Offering these benefits as an option (for example, including them in some policies but not in others), would result in very high premiums for optional benefits because people who know they need them would be much more likely to choose them.

The AHCA presents state policymakers with a dilemma: they can reduce the essential health benefits to allow less expensive insurance options for their residents, but doing so may eliminate access to certain benefits for people who want and need them.