The enactment of the Affordable Care Act (ACA) on March 23, 2010 ushered in sweeping changes to the U.S. health care system. While the law touched almost every aspect of our health care system, from how coverage is obtained to how the health care services are provided, the parts of the law that have garnered the most attention, and generated the most controversy, are those relating to the availability and affordability of health insurance coverage. The coverage provisions in the law were aimed at improving access to insurance, especially for those with pre-existing medical conditions, enhancing the quality of coverage by imposing minimum benefit standards, and increasing the affordability of coverage through expanded public programs and new subsidies for private coverage. This brief examines these coverage provisions, providing an update on how they have been implemented and assessing their impact. It also discusses key issues looking ahead.

Framework of the ACA

Like previous attempts at health care reform, the ACA was structured to address the gaps and limitations of our public-private health insurance system. It builds on employer-based coverage, restructures the individual insurance market, and broadens access to and affordability of coverage by expanding Medicaid for the low-income population and extending tax subsidies for the purchase of private insurance to those with moderate incomes (Figure 1).

As enacted, the ACA created a framework for enhancing access to health coverage. It imposed new regulations on health plans in the individual and small group markets, including guarantee issue and rate restrictions, to ensure everyone could purchase coverage regardless of their health status. In addition, the law created state-based health insurance Marketplaces through which individuals would be able to purchase private insurance coverage with premium and cost-sharing assistance on a sliding scale for those individuals and families with income between 100% and 400% of the federal poverty level (FPL, $11,770-$47,080 for an individual in 2015). These Marketplaces were to be established by the states; however, the law provided for the federal government to establish a Marketplace in any state that chose not to run its own. For the low-income population, Medicaid coverage was extended to all adults with income at or below 138% FPL. The law also imposed new requirements on individuals to purchase insurance, with some exceptions, and large employers to offer insurance to their employees. 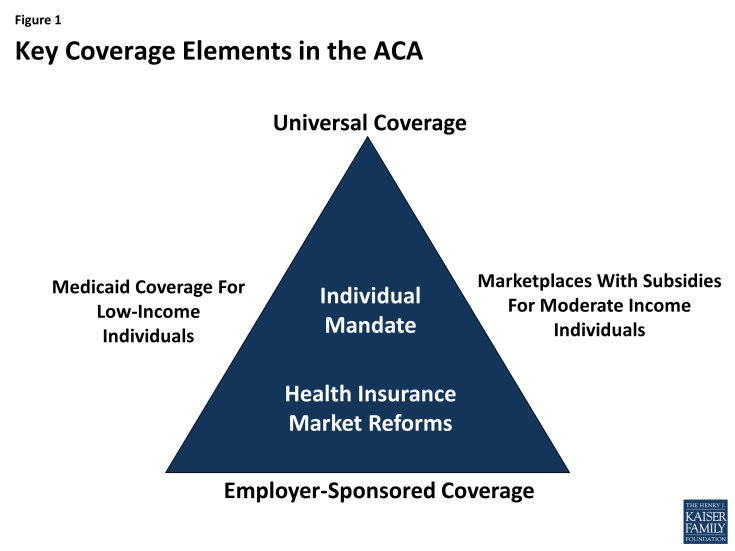 The ACA relies heavily on states to implement the coverage provisions in the law. While some provisions went into effect without state action, many others were influenced by state decisions. For example, states were given responsibility for defining the set of benefits that would be offered by all plans in the individual and small group markets. They were permitted to impose tighter restrictions on insurance companies in some areas, such as premium rating. They were also provided the option of establishing a state-run Marketplace, and with the Supreme Court ruling in June 2012, states were given the choice whether or not to adopt the Medicaid expansion.  These decisions have had important implications not only on the cost of coverage available in the states, but also on the number of people who have newly gained coverage as a result of the ACA. Consequently, as it did prior to implementation of the ACA, health insurance coverage continues to look different across the states.