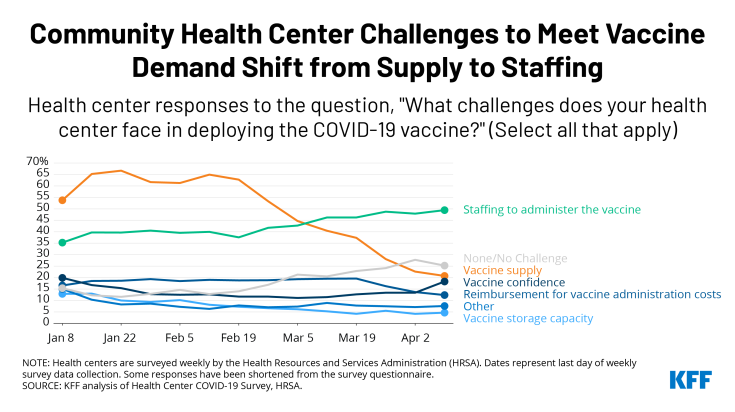 Community health centers are a national network of safety net primary care providers and are a major source of care for many low-income populations and people of color. They have partnered with state and local governments, and more recently, the federal government, to provide vaccines in their communities.

Recent data show that health centers are less likely than in the past to report vaccine supply as the most common challenge in deploying the COVID-19 vaccines, while they are more likely to report staffing challenges. In January 2021, as many as two-thirds of health centers (67%) reported that vaccine supply was a challenge in administering the vaccine, but that number began steadily declining in late February. By early April, it had dropped to 21% of health centers. Meanwhile, staffing is a growing challenge and has become the most commonly reported problem among health centers, with nearly half (49%) of those surveyed citing it as a challenge.

These trends likely indicate that many health centers are starting to operate at full capacity to meet the demand for vaccinations. Along with the increasing vaccine supply nationally, health centers’ vaccine supply has also been bolstered by the partnership with the Biden administration. As of early April, health centers had received more than 3.5 million doses through the federal vaccine program, in addition to allotments from state and local jurisdictions, which appear to make up the majority of doses administered by health centers so far. Now that all states have opened eligibility requirements to all adults over age 16 (as of April 19), demand for the vaccine is likely to increase as well.

The ability of health centers to address growing staffing challenges will be important to reaching more underserved and hard-to-reach populations. Health centers, particularly the early participants in the federal vaccine partnership, serve larger shares of agricultural workers, people experiencing homelessness, residents of public housing, and those with limited English proficiency. Reaching these populations may require strategies such as using mobile vans to bring vaccines into neighborhoods and work sites and conducting community-based outreach that will further stretch limited staff resources. Given health centers’ role in facilitating equitable access to the COVID-19 vaccine, increasing the number of health centers able to operate at full capacity will be important to reach underserved communities in greater numbers and advance equity on a larger scale.