The Vast Majority Of Vaccinated Americans Will Get A Booster if Recommended, But Many Unvaccinated People See Need for Boosters As Evidence Vaccines Are Not Working

Large Majorities of Americans, Both Vaccinated and Not, Say COVID-19 is Likely to Persist at Lower Levels and Be Something the U.S. Will “Learn to Live With” like Seasonal Flu

More than 7 in 10 adults (72%) in the U.S. now report that they are at least partially vaccinated against COVID-19, with the surge in disease and death driven by the Delta variant serving as the chief impetus in recent weeks, finds the latest KFF COVID-19 Vaccine Monitor.

That was up from 67 percent of adults in late July. The survey finds that self-reported vaccination rates increased most for Hispanic adults, rising 12 percentage points to 73 percent in September, and among adults ages 18 to 29, up 11 percentage points to 68 percent. Similar shares of adults now report being vaccinated across racial and ethnic groups, a sign that the racial gap in vaccinations may be narrowing.

Adults who got vaccinated since June 1 cite as major reasons the increase in COVID cases due to the Delta variant (39%), reports of local hospitals filling up (38%), and knowing someone who became seriously ill or died (36%). Thirty-five percent also say a major reason was to participate in activities where vaccinations are required, such as traveling or attending events. Fewer people say being mandated by their employer (19%) or the FDA granting full approval to the Pfizer vaccine (15%) were major factors. 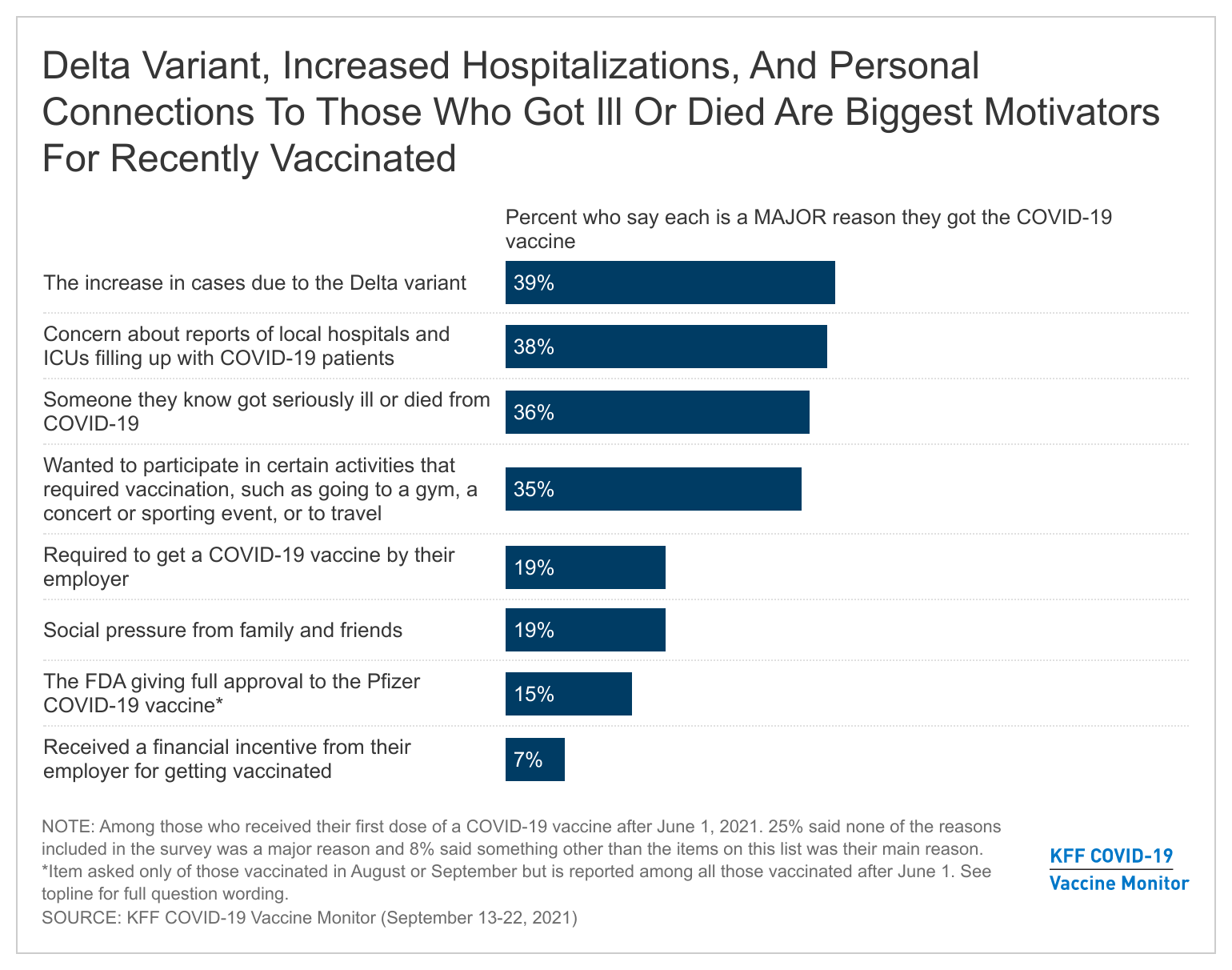 “Nothing motivates people to get vaccinated quite like the impact of seeing a family member, friend or neighbor die or become seriously ill with COVID-19, or to worry that your hospital might not be able to save your life if you need it,” said KFF President and CEO Drew Altman. “When a theoretical threat becomes a clear and present danger, people are more likely to act to protect themselves and their loved ones.”

The largest remaining gap is between political partisans, with 90 percent of Democrats reporting they have gotten at least one dose compared to 58 percent of Republicans. Sixty-eight percent of independents say they are at least partially vaccinated. Large gaps in vaccine uptake also remain by education level, age, and health insurance status.

The September Vaccine Monitor was in the field after the Biden Administration announced plans to roll out COVID-19 booster doses to all Americans, but before federal health officials recommended boosters for people 65 and older and those at high-risk of illness. 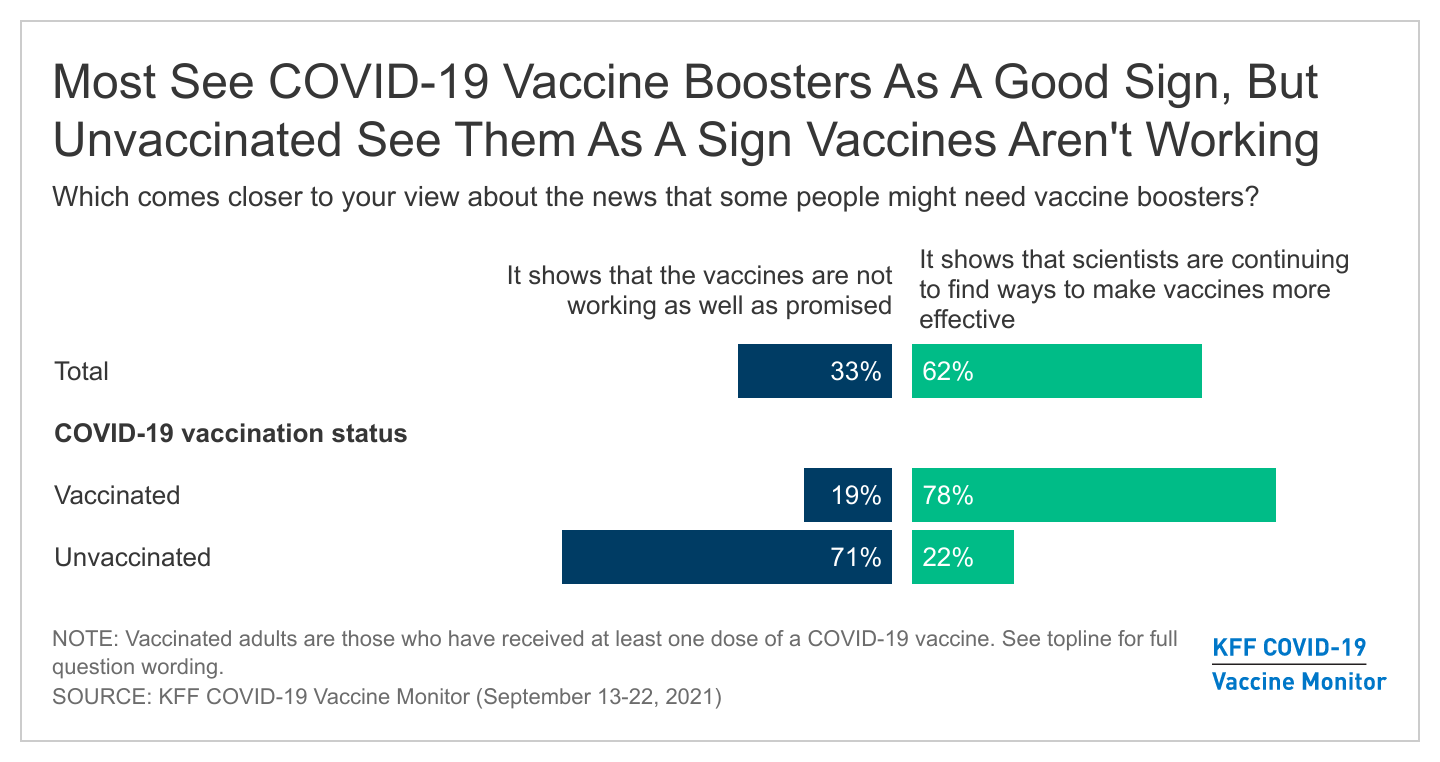 Among fully vaccinated Americans, a large majority say they will definitely (55%) or probably (26%) get a booster if it is recommended for people like them, while small shares say they will probably not (8%) or definitely not get it (5%). Those who don’t want a booster say they feel they won’t need it (14%), believe more research is necessary (13%), and they don’t trust the government or the CDC (8%).

Most expect the U.S. will learn to live with COVID-19

As the pandemic wears on, about 8 in 10 adults – including large majorities of both vaccinated and unvaccinated adults– say they expect that COVID-19 will “continue at a lower level and be something the U.S. will learn to live with and manage with medical treatments and vaccines, like the seasonal flu.” Few (14%) think COVID-19 will be “largely eliminated in the U.S. like polio.”

“We may have reached a turning point in attitudes about the pandemic,” KFF Executive Vice President Mollyann Brodie said. “A majority of the public seem resigned to accept the possibility that COVID-19 may never be fully defeated and instead will have to be dealt with as a chronic problem.” 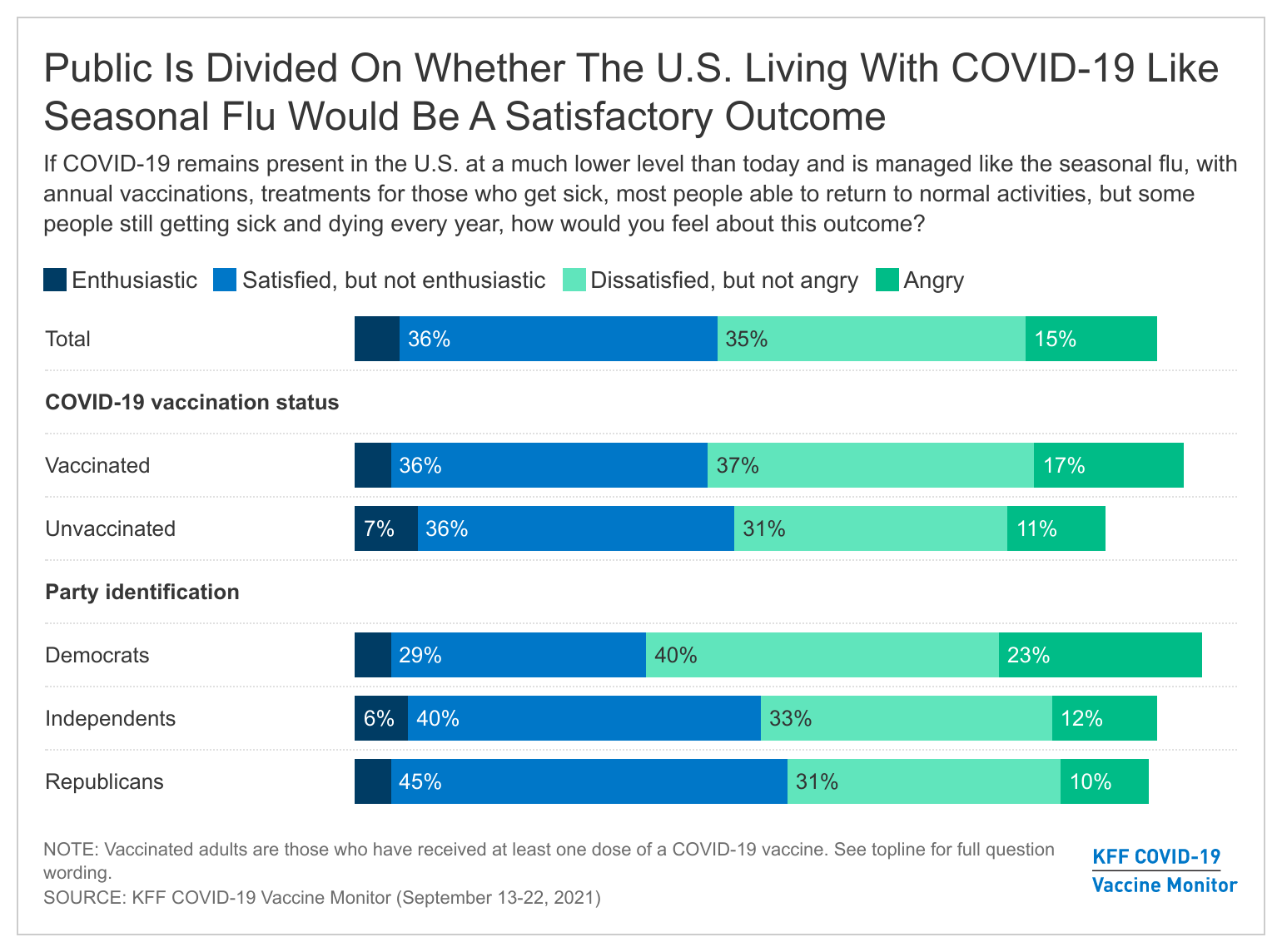 As for what’s driving the recent surge in COVID-19 cases in many parts of the country, it depends on whom you ask.

Vaccinated people say it is due to too many people refusing the vaccine (77%), people not taking enough precautions (73%), and the infectiousness of the Delta variant (67%).

Unvaccinated people say it’s because vaccines are not as effective at preventing the spread of COVID-19 as scientists initially thought they would be (58%), followed by immigrants and tourists bringing COVID-19 into the country (40%), people not taking enough precautions (37%), and the infectiousness of Delta (35%).

Republicans and Democrats divide along similar lines. Big majorities of Democrats point to people not taking precautions like wearing masks and social distancing (89%), and too many people refusing to get the COVID-19 vaccine (87%), while about 3 in 10 Republicans say the same. On the other hand, 55 percent of Republicans say immigrants and tourists bringing COVID-19 into the U.S. is a major reason for the high number of cases, whereas fewer independents (34%) and Democrats (21%) see this as a major reason.

Workplace mandates may prompt more people to get vaccinated

Nearly 6 in 10 Americans (58%) support the new federal government mandate on larger employers to require vaccines or weekly testing for their workers, and nearly eight in ten (78%) support the requirement that these employers offer workers paid time off to get vaccinated and recover from side effects. The public is more divided on whether employers in general should require workers to be vaccinated against COVID-19 (48% say they should and 50% say they should not).

However, when presented with the option to get weekly testing instead — an option that larger employers could offer under the Biden plan – over half of unvaccinated workers (56%) say they would take the testing option. Just 12 percent say they would get the vaccine and three in ten would leave their job. 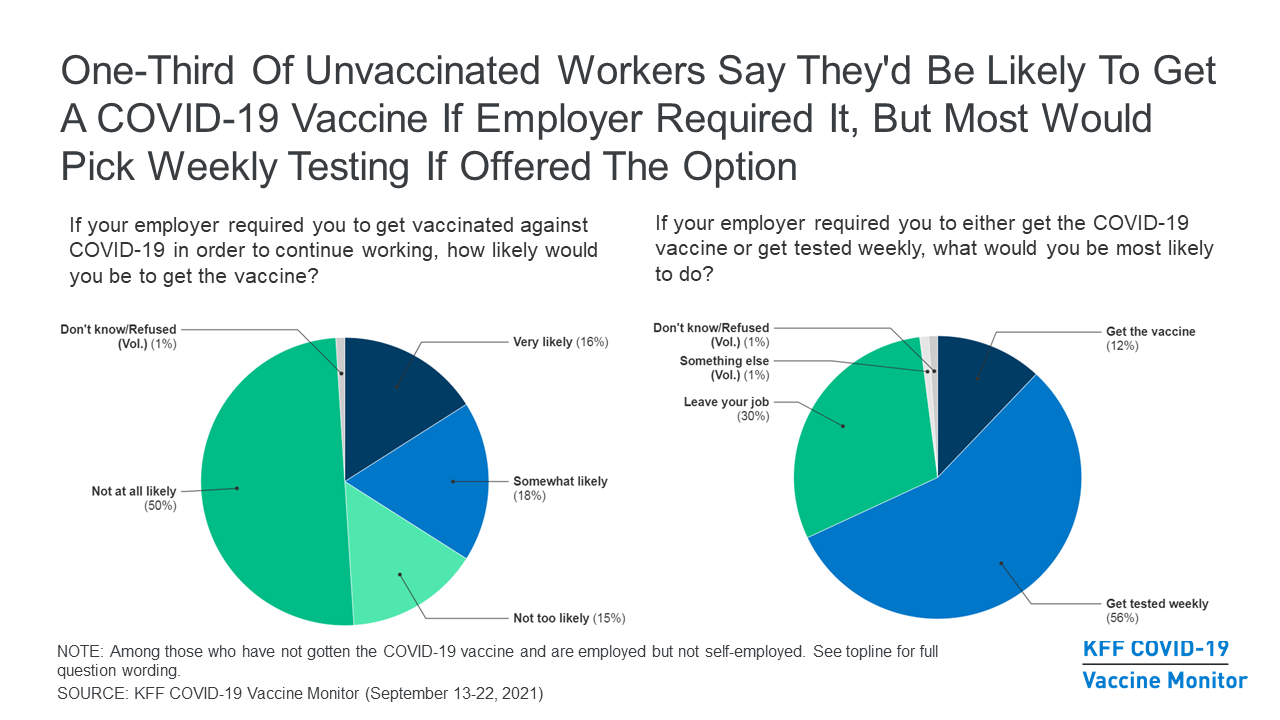 Designed and analyzed by public opinion researchers at KFF, the KFF Vaccine Monitor survey was conducted from September 13-22 among a nationally representative random digit dial telephone sample of 1,519 adults, including oversamples of adults who are Black (306) or Hispanic (339). Interviews were conducted in English and Spanish by landline (171) and cell phone (1,348). The margin of sampling error is plus or minus 3 percentage points for the full sample. For results based on subgroups, the margin of sampling error may be higher.