Nearly Six Million Are Not Eligible and Will Have to Pay the Full Cost of Coverage, and Many Could End Up Uninsured

With more than 31 million workers filing unemployment claims between March 1 and May 2 as the coronavirus crisis hit the nation’s economy, a new KFF analysis estimates 26.8 million people across the country would become uninsured due to loss of job-based health coverage if they don’t sign up for other coverage.

While most are eligible for coverage under the Affordable Care Act (ACA), not all will take it up. In addition, 5.7 million are not eligible for help under the ACA and would have to pay the full cost of their coverage, and many of them will likely remain uninsured.

The analysis estimates that, based on their incomes and other factors, most (79%) who lost employer coverage and became uninsured are likely eligible for subsidized coverage, either through Medicaid (12.7 million) or through the ACA’s marketplaces (8.4 million).

Overall, nearly 78 million people live in a family experiencing job loss since March 1. Some already have coverage from a source besides the previous employer, which they would retain, or could switch to coverage offered by their spouse’s employer or, for young adults, through parents.

At first, a small number (150,000) who live in states that have not expanded their Medicaid programs to cover low-income childless adults would fall into a “coverage gap,” ineligible for Medicaid but with incomes too low to qualify for tax credits to help with marketplace premiums. The analysis projects that this group would grow to 1.9 million by January 2021 when workers’ unemployment benefits expire, dropping their incomes below the threshold to qualify for tax credits.

“Unlike in past recessions, most of those who lose their job-based coverage will be eligible for health coverage because of the Affordable Care Act, though some may find coverage unaffordable even with subsidies,” Executive Vice President for Health Policy Larry Levitt said. “As unemployment benefits expire, however, about two million more people in states that did not expand their Medicaid programs under the ACA will move into the Medicaid coverage gap and have no affordable option.” 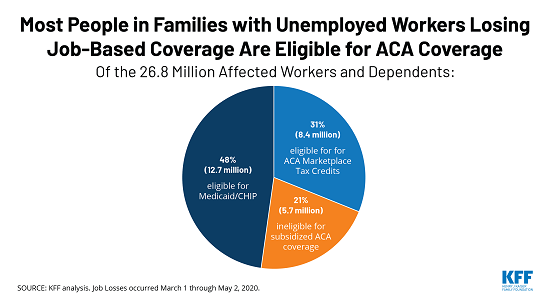 The analysis reflects workers’ incomes while working and while employed, family status, and state of residence. It takes into account workers’ expected unemployment benefits, including the $600 per week additional federal supplement available through the end of July.